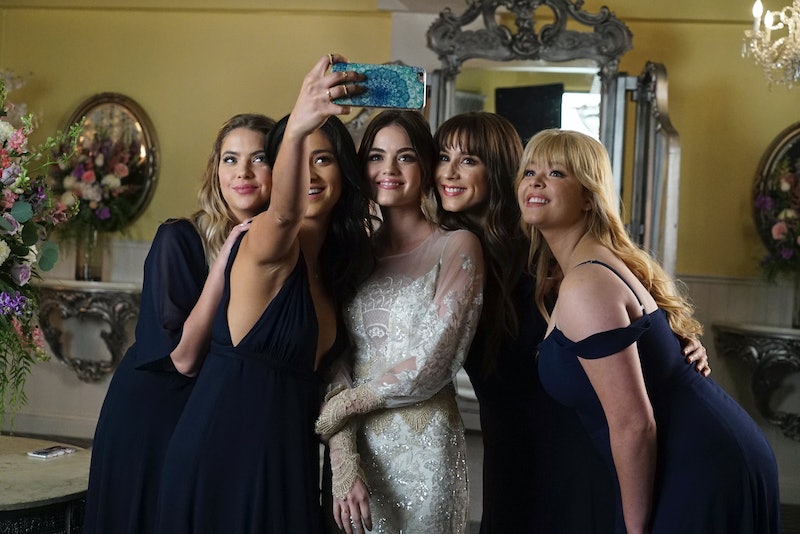 As much as Pretty Little Liars is known for its shock value and plot twists, there's definitely depth to the beloved Freeform series. Nestled between the creepy dolls and chilling text messages, Pretty Little Liars had its share of empowering moments over the years. No, really — you didn't misread that sentence. There are plenty of scenes that showed the main characters taking a stand or finding unexpected strength in themselves. And that was meaningful to witness.

Since the PLL finale is almost here, it's worth looking back on those very moments — the ones that proved that this wasn't just a murder mystery filled with high school drama. When you dig a little deeper, you'll realize that the characters — especially Hanna, Emily, Spencer, and Aria — don't fit cookie-cutter roles, and they're so much more than teen stereotypes. The show tackled topics ranging from mental health to coming out to sexuality in general. While there were undeniably bumps along the way, the show really explored a range of issues affecting young people today in a way that didn't talk down to the audience.

In honor of that idea, below are fan responses about the times that Pretty Little Liars made them feel something deeper.

"For me, the most empowering moment of 'Pretty Little Liars' was episode 1x09's flashback that revealed Emily's developing feelings for Alison, and Emily's subsequent coming out to the rest of the Liars. As an LGBTQ millennial myself, it was empowering to see a young female character on TV being represented as gay, not for shock value, but rather to serve as a positive role model for the show's young audience. The developing relationship between Emily and Alison (commonly referred to as "Emison") that was first portrayed in that moment would also go on to be the most consistently intriguing plotline that 'PLL' had over the course of its seven-year run."

"The most empowering moment in 'Pretty Little Liars' for me was when Emily came out to her dad. There's never a 'perfect time' to come out to friends or family and, despite admitting that she was scared of her parents finding out, she took the opportunity to tell him when it presented itself."

"For me, the most empowering part of 'Pretty Little Liars' was when Hanna saves Jenna from a fire. They've been enemies for years, and yet in that scene, it seems that Hanna doesn't think twice about pulling Jenna out of the burning building.

There's a very strong focus on women and friendship throughout the series. When Jenna asks Hanna why she saved her, all she can say is, 'You're welcome.' It's a demonstration of girls and women always looking out for one another, though they've been sworn enemies for years."

"The most empowering moment for me was during the Christmas special when Paige was right alongside the boyfriends for the sexy Santa surprise dance. To see Emily's girlfriend treated just the same as any other straight love interest made me feel like that could happen for me someday too."

"One of the most empowering 'PLL' moments for me was Season 6 Episode 1 when the Liars were trapped outside Charles' doll house. Aria states, 'I don't know how much longer I can handle this,' to which Mona responds, 'You can handle it, Aria... We all can.' This moment stuck out because even without food or water, or any indication of when the horror would end, the Liars could get through it because they had each other. It's a true testament that when you're surrounded by your girlfriends you can accomplish and tackle anything you may face."

"I'd have to say one of the most empowering moments on the show, for me, was that iconic moment when Hanna stepped into the shower with Caleb back in Season 1. I remember thinking how cool it was to see the reverse of power in this situation. Sure, it helped to solidify the fact that these two were endgame, but it also flipped the script on the 'vulnerable and naked woman in the shower' trope. Hanna owned this scene and I'll never forget it (nor would I want to)."

"Stepping back and looking at the show as a whole, it is pretty incredible that a group of women are taking control of their lives and not playing victims. Even though I scream at the TV and say, 'GO TO THE POLICE,' it is really powerful to see them face this masked villain time and time again. Jenna (who like, is the worst) once said something along the lines of, 'I feel a lot safer when I'm in charge of what happens to me,' and I feel like that's a great motto to live by (on the show, and IRL)."

Next time someone tries to dismiss the show as nothing but drama, keep these PLL moments in mind. The show is leaving behind quite a legacy.