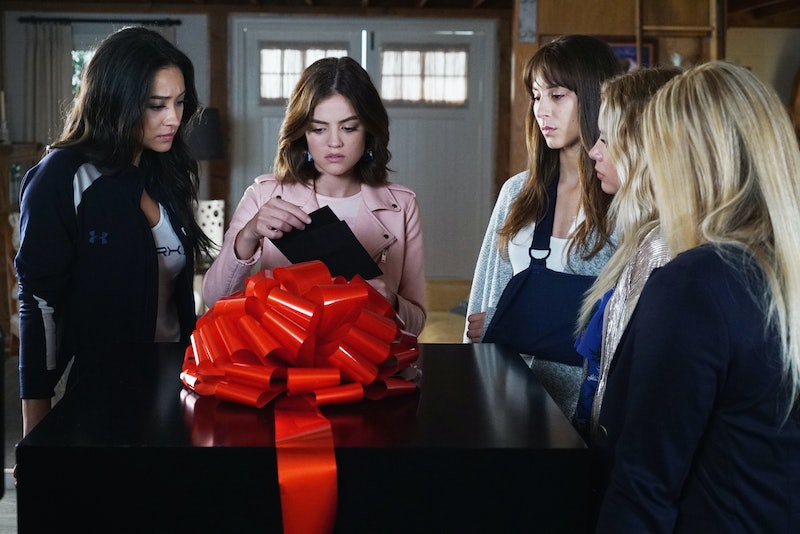 As a fan of Pretty Little Liars, I understand all too well how important every last detail on the show is. All of those Pretty Little Liars fan theories aren't just pulled out of thin air, guys. And after the finale, you best believe I'll be going back through it all with a fine tooth comb to pick up on any clues I might've missed about whoever is revealed to be A.D. So I've got Spencer-on-caffeine levels of excitement about discovering that Season 7 of Pretty Little Liars is coming to Netflix in July, according to the streaming service. Yes, this means that every episode of the show will be available to watch on there. And yeah, I'm going to be marathoning it from pilot to finale ASAP. (For more Netflix July titles to look forward to, catch Bustle's Facebook Live on Tuesday at 11 a.m. ET and check out the full list on Wednesday when Netflix releases it.)

UPDATE: The full list of what's coming to and leaving Netflix in July is now available. Check it out, so you don't miss your favorites.

EARLIER: Though Pretty Little Liars has been available on Netflix for a while now, there's something incredibly appealing about being able to watch it with the final season included too. So much has happened in Season 7B that calls back to previous episodes, so I really want to be able to delve in and compare scenes. I want to throw on my sleuthing cap and pinpoint every twist, turn, and revelation that has led to whatever the events of the finale will be.

One of the most enjoyable things about the show has always been those shocking moments from PLL where the plot takes an audacious, unexpected turn out of nowhere. Whether it was the revelation that Alison was really alive, the time we saw Ezra in that creepy spy lair and automatically assumed he was A, or any of the times that a character gets shot or murdered, the show has always been relentless in making us gasp in shock and horror in front of our screens every episode. And you're damn right that I want to be able to relive all the magic. But this time, with the new knowledge of exactly what the hell is going on and who's leading this circus.

But most of all, I want to pull out my red string again, and start making those connections throughout every episode as to how A.D. was likely in front of our noses for the whole series, and we just didn't notice. Because, according to Keegan Allen, who plays Toby on the show, we've definitely known who A.D. is on PLL the whole time. He told People,

"What I love about who it is is that everyone knows who it is … but it will be so shocking and surprising. Everyone will freak out because it’s so clearly in every episode. When it’s finally revealed, you could literally go back to season 1 and knowing who it is, you can be like, ‘Oh, wow. Whoa. This has been here all along, and I never noticed it,’ which is, I think, brilliant."

More like this
Every Horror Movie Reference In The 'PLL: Original Sin' Premiere
By Alyssa Lapid
The 'PLL: Original Sin' Creators Say A’s Identity Will Be “Very Clear” By The Season Finale
By Alyssa Lapid
Does 'Locke & Key’s Ending Mean There Could Be A Season 4?
By Sophia Moore
Netflix Just Rebooted A Classic ‘90s High School Drama
By Maxine Harrison
Get Even More From Bustle — Sign Up For The Newsletter