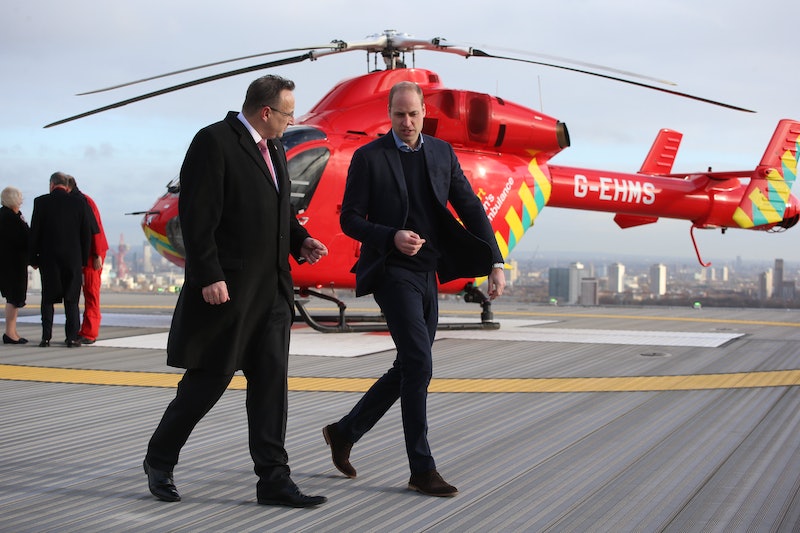 The Duke is making a difference. Prince William's air ambulance pilot experiences were on center stage at the 49th Annual Meeting of the World Economic Forum in Davos, Switzerland. While speaking on a Mental Health Matters panel on Wednesday, Jan. 23, the William discussed the effects of his time flying medical crews to emergency sites for East Anglian Air Ambulance — but it certainly wasn't easy for him.

"I still find it very difficult to talk about it," admitted the father to Prince George, 5, Princess Charlotte, 3, and 9-month-old Prince Louis. "I get very emotional about it because it relates very closely to my children, and so it is very hard to talk about it." (He's previously been open about having to work on "very traumatic jobs involving children.")

After more than two years as a Cambridge Airport-based ambulance pilot, William clocked in for his last shift in July 2017. He also cited his more than seven and a half years as a pilot with the Royal Air Force Search and Rescue Force when announcing his resignation that year, saying that both were experiences he "will carry with me for the rest of my life, and that will add a valuable perspective to my royal work for decades to come."

The fulfillment of that promise was evident in Davos, as he further explained his own career-related experience with emotional trauma and how he's dealt with it:

"Lots of people in the medical community have these particular cases where I don't think you ever get over it because you go through someone else's pain and you live with it. And I just felt the most important thing was understanding and realizing that it was there. And I think if I hadn’t been doing what I was doing, I might have gone into my shell a bit and gone, ‘I can deal with this myself.’ Then potentially, down the line, it manifests itself in a much worse situation ... I know that if I hadn’t taken the action that I did then, I would have definitely gone down a slippery slope and I would have been dealing with mental illness on a different level.”

By lending the voice to the cause, as he did alongside fellow leaders, including New Zealand Prime Minister Jacinda Arden, William hopes others will follow suit and start dialogues because, as he said, "we should talk about it." And the time to start is now, he continued, "so that our children and grandchildren don’t have to go through this process and they can be a lot more open about [mental health]."

Back in September, William — who also met with former vice president Al Gore, as well as Queen Máxima of the Netherlands and German Chancellor Angela Merkel in Davos — launched an program called Mental Health at Work. Along with wife Kate Middleton, Duchess of Cambridge and brother Prince Harry, Duke of Sussex, he also created Heads Together, "a mental health initiative ... which combines a campaign to tackle stigma and change the conversation on mental health with fundraising for a series of innovative new mental health services," per the organization's official website.

Last month, London's Air Ambulance Charity also named William the patron of their #30YearsSavingLives campaign, per Kensington Palace. During an event with the organization on Jan. 9 (which also happened to be his wife's 37th birthday), William even took a brief helicopter flight over London.

More like this
Tyler Perry Makes Rare Comment About Meghan Markle & Prince Harry's Love Life
By Radhika Menon
10 Photos Of William, Harry, & Their Cousins Honoring The Queen Together
By Stephanie Topacio Long
William & Kate Shared How Their Kids Are Doing As They Mourn The Queen
By Stephanie Topacio Long
Rachel Zegler Reveals She Had Breast Cancer Scare
By Radhika Menon
Get Even More From Bustle — Sign Up For The Newsletter