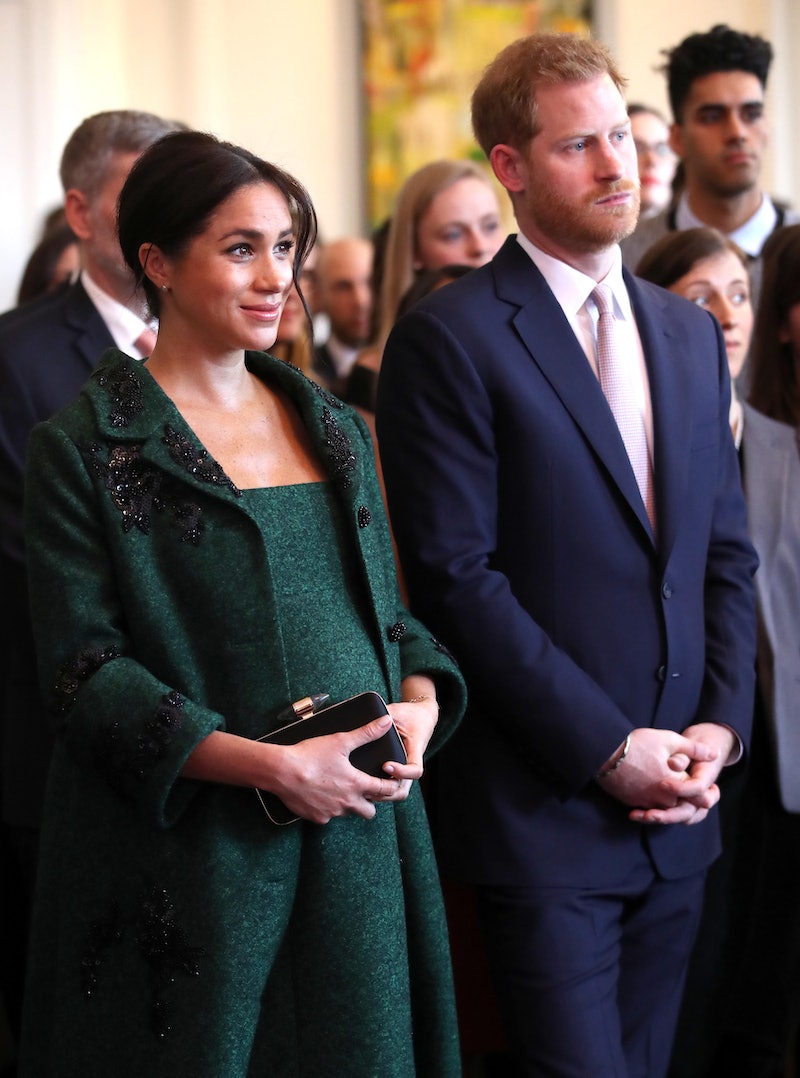 Windsor has welcomed a new family to the neighborhood. As it was reported yesterday, Meghan Markle and Prince Harry moved into their residence at Frogmore Cottage in Windsor. The move happened just in time for the upcoming arrival of their baby, and now fans are getting a look at the photos of the Duke and Duchess of Sussex's new home.

The royal parents-to-be most recently were staying at the two-bedroom Nottingham Cottage in Kensington Palace. The palace officially announced Meghan and Harry's move to the cottage, located on the Windsor Castle estate, in November. But, as People reported, the cottage needed to undergo about six months of renovations before it was move-in ready for the couple as they prepare to welcome their newborn. People also reported that the cottage is nestled about 25 miles west of London, allowing the Duke and Duchess to create a home base more suited to their identities outside of Royal life.

Well, the first photos of the pair's new country home, away from the spotlight, are here and the cottage looks super idyllic and homey. Royal family fans can get a small glimpse at where the high-profile Royals will be residing, as well as insight into the changes made during the renovations.

According to People, the structure was once a staff residence with multiple apartments before becoming Meghan and Harry's five-bedroom home. Other changes that were reportedly made per the mag are a new white exterior, darker-hued roof, and different windows. A custom kitchen and dining room are also supposedly amongst the changes, and perfect for Meghan to dust off some of the recipes from her days running the Tig lifestyle blog.

People's sources say Harry is planning "to do some entertaining" of his own in the remodeled spaces, which also include bookcases that have been built into alcoves. Some of the other touches that suggests Meghan's Californian influence on the cottage include a "green-energy center, springy 'floating floor' (perfect for yoga) and nontoxic paint," per People. Does anyone else have an image of Meghan trying to get Harry into meditation, or perhaps inviting sister-in-law Kate over with the kids for tea?

Apparently, the new home has plenty of outdoor areas for such activities — and is only a short distance from the Queen. A former palace staffer told People, "It has the most amazing mulberry walk, where we would pick mulberries for Prince Philip's mulberry gin. And when the Queen is there on a Sunday afternoon, it is a five-minute walk up the hill for tea with Granny. It is gorgeous."

Meghan and Harry's new digs also holds special meaning for the newlyweds, as their May 2018 wedding reception was held there. The Duke and Duchess also exchanged vows in St. George's Chapel, also in Windsor Castle. Per People, an alleged family friend says the move to Frogmore makes sense not only on a sentimental level, but a practical one. "They'll enjoy it much more in Windsor," the source said to the mag. "They feel claustrophobic in their place in Kensington Palace."

Photographic evidence of the Royals' big move is just the latest development in a series of changes for Meghan and Harry. On March 14, a royal statement confirmed that the Duke and Duchess had officially split households from Prince William and Kate Middleton, complete with new staffs. Earlier this week, the couple got their own official Instagram account, @SussexRoyal. Of course, the biggest change will come when the new baby arrives, perhaps later this month.

It's not hard to picture Meghan now, putting finishing touches on the nursery, and contemplating her next 'gram. Luckily, her new home with Harry is a gorgeous place to do it all.