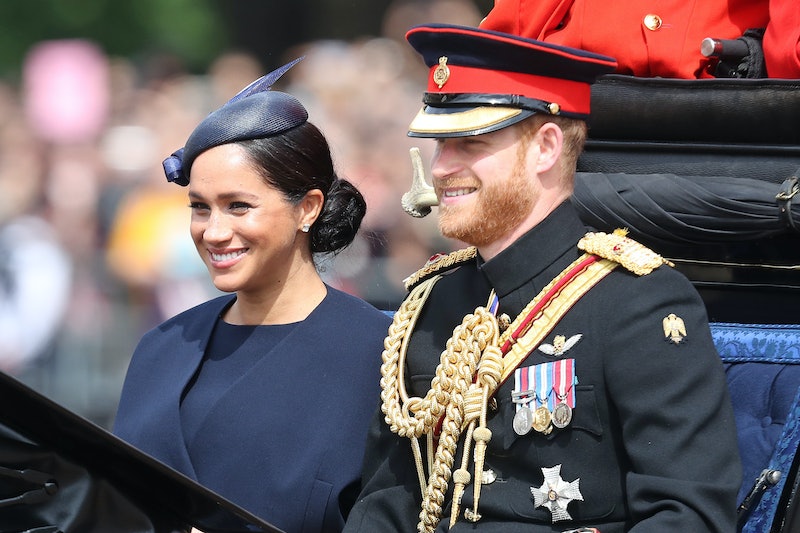 America's favorite pastime headed across the pond this weekend, as Prince Harry and Meghan Markle attended the first MLB game in London. On Saturday, the New York Yankees and Boston Red Sox faced off in the first ever in-season MLB game played in London, and the royal couple was there for the start of the two-game series. The Duke and Duchess of Sussex were even gifted with a Red Sox onesie, and a tiny Yankees jersey for baby Archie, per People.

Yankees clubhouse reporter Meredith Marakovits shared a video of the royal couple visiting with the Yankees before the game, and it looks like Prince Harry may have a favorite team. In the video, the team gifts the royals with a jersey sporting Archie's name, and Markle and Prince Harry are both delighted. The Duke of Sussex can even be heard saying, "You beat the next door's present by the way."

Later, Prince Harry and Markle observed the ceremonial first pitch, which was thrown by two Invictus Game athletes, per BT Sport. The Invictus Games is an international event that was created by Prince Harry for members of the armed services who are injured, sick, or wounded. The Invictus Games are close to the prince's heart, and he even sported a shirt representing them as he watched the two athletes each throw a pitch to kick off the game.

It's fitting that the Invictus Games had such a strong presence at the opening London MLB game this weekend. June 29 is Armed Forces Day, and the official Instagram account for the Sussexes shared a tribute to all those who have served. In part, their message read,

"Today is Armed Forces Day — celebrating the men and women who make up the military community: from those that are serving, to families, veterans, reservists, cadets and charities.

To all those serving in the Armed Forces, both in the UK and abroad, be it in uniform or family — we want to thank you for the work you do every day in representing and protecting your country.

Supporting veterans is a cause that's important to Prince Harry and Markle, so it makes sense that the Duchess would choose this special MLB game on Armed Forces Day to make her second royal appearance since giving birth to her and Prince Harry's first child in May. She stepped out for the first time earlier this month to attend the Trooping the Colour parade, which honors Queen Elizabeth's birthday.

Markle is easing herself back into her charity work and royal duties this summer as she prepares for a major trip with her family in the fall. Earlier this week, the couple confirmed that they will be going on a royal tour of South Africa in the autumn, along with baby Archie.

For now, the royal couple seems happy to be representing the Invictus Games, while also enjoying a showdown between two of the MLB's most legendary rivals. And hey, the fact that they got an adorable jersey for Archie out of deal likely only made the day all the more memorable.

More like this
Tyler Perry’s Birthday Note To Meghan Markle Mentioned Struggles She’s Overcome
By Brad Witter
Lewis Hamilton Turned Down A Role In 'Top Gun: Maverick' For This Surprising Reason
By Darshita Goyal
Harper Teasing David Beckham’s Dad Dancing Is Beyond Adorable
By Frances Stewart
The 12 Best US Open Tennis Outfits Of All Time
By Avery Matera and Dominique Norman
Get Even More From Bustle — Sign Up For The Newsletter