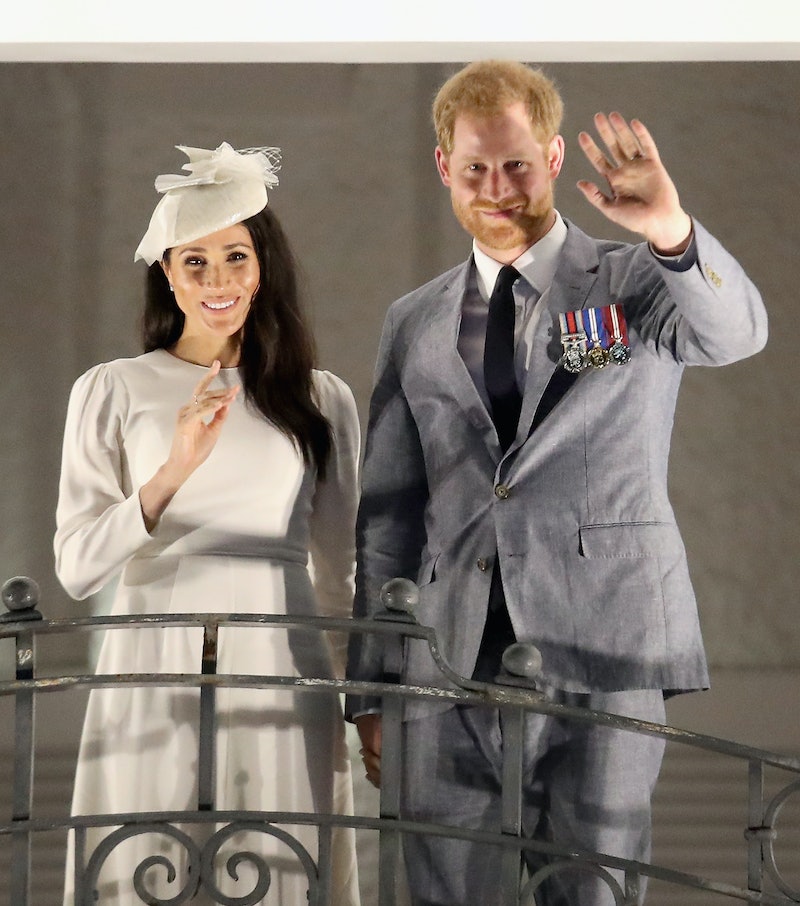 Being pregnant calls for some lifestyle changes no matter who you are, even if you're a royal family member. One of those adjustments can include abstaining from alcohol. Even so, the Duchess of Sussex isn't alone in this at social events. Prince Harry toasted with water at an event in solidarity with Meghan Markle, according to Glamour. Of course, Markle wants to do what is best for her first-born child, but it's very sweet of her husband to support her by doing the same. This is something that fans of the royal couple seem to really appreciate.

On Oct. 23, royal correspondent Omid Scobie tweeted, "Meghan and Harry both toasting with water at tonight’s reception (@FIJIWater, natch)." It's also pretty clever he tagged Fiji Water, given that they were at a black tie event in Fiji during their royal tour, according to Scobie's previous tweet.

Prince Harry's gesture was probably appreciated by his wife, but it was also praised by some Twitter users. One person responded to the initial tweet with, "Aww so sweet of Prince Harry to join her in her ‘water toast.'" A Prince Harry and Meghan Markle fan account also gave the prince praise for this move by tweeting, "Nice Good Job Harry Supporting Meg During her pregnancy."

Not that Prince Harry needs any positive press, but accolades don't hurt, right? Someone described the water toast as "so romantic" and remarked, "I love him even more now." There seem to be more and more Prince Harry fans each day.

There's no doubt about it — the Duke and Duchess of Sussex are #CoupleGoals for many reasons, and this alcohol-free toast is just another bullet point on that list.

The Gem Radio account tweeted, "Prince Harry's been toasting with water so pregnant Meghan doesn't feel left out of the champagne toast! What a guy?!?"

There's no doubt that Prince Harry is a sweet husband, who seems to prioritizes being considerate to his partner. This isn't the only time Prince Harry has stood by Markle's side. On Oct. 23, TMZ reported that the couple's United States tour has been postponed from spring 2019 to fall 2019. This makes sense, since Markle took a break from their Australian tour when she wasn't feeling well two days ago. Prince Harry could've embarked on the U.S. tour alone, but instead of continuing with the plans, he will be with his wife.

Regardless it may actually be for the best to postpone the American tour, since Prince Harry and Markle's baby will be born by then. So maybe their fall 2019 visit will actually be a tour for three? That would be worth the wait for sure.

Prince Harry has already been a doting husband throughout this pregnancy. On Oct. 21, an American sailor lifted the Duke of Sussex for a hug at the Invictus Games in Australia, the prince nicely advised him not to greet his pregnant wife in the same way. According to People, the sailor had no problem with that and said, "No, I know" while he laughed and gave the Duchess a handshake instead.

As excited as the world is for the impending arrival of the royal baby, Prince Harry seems even more excited to become a dad and is doing what he can to be a supportive husband to Markle.