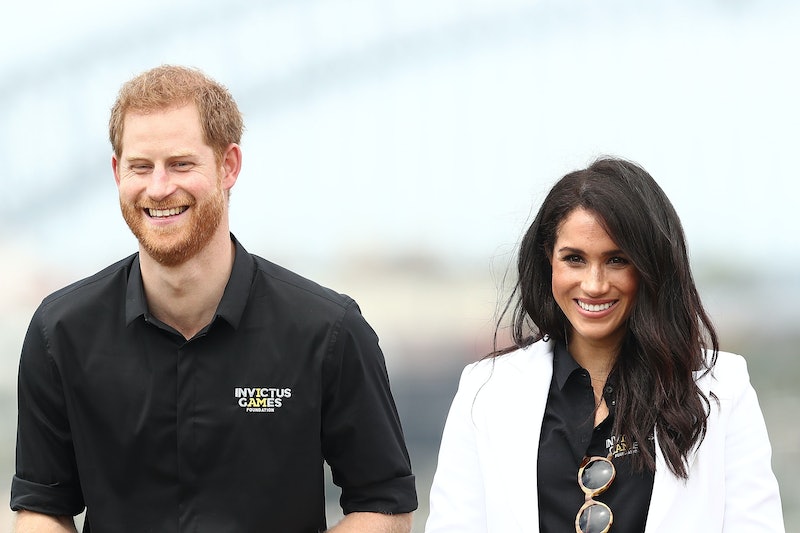 The Duke and Duchess of Sussex's visit abroad had an eventful start, but the rest of the trip could be a quieter time for the Duchess, at least. On Sunday, Oct. 21, it was announced in a statement from the The Royal Household that Meghan Markle has decided to step back from events during the remainder of the Royal Tour. The decision is likely for health reasons, as Markle is estimated to be about 12 weeks pregnant.

According to E! News, The Royal Household released a statement about Markle's absence, reading:

"After a busy programme, The Duke and Duchess have decided to cut back The Duchess's schedule slightly for the next couple of days, ahead of the final week and a half of the tour."

Markle and Prince Harry embarked on their official visit to Australia, Fiji, the Kingdom of Tonga, and New Zealand, on Tuesday, Oct. 16. The couple revealed that Markle is pregnant on the evening before the trip, and it's not surprising that the schedule would change to accommodate her health.

Prince Harry and Markle began the tour in Sydney, Australia, and their first week was packed with events. The couple met with Peter Cosgrove, the Governor-General of Australia, and visited the Taronga Zoo. The royals kicked off the 2018 Invictus Games, which will continue through the week. The Paralympic style competition, which aims to rehabilitate injured veterans through sport, was created by Prince Harry.

On Sunday, Markle took the morning to rest, while Prince Harry awarded medals at a road cycling event, according to People. However, Markle was able to participate in honoring Invictus competitors. The Duchess joined Prince Harry in the afternoon for a reception attended by the athletes, their friends and families, and the Australian Prime Minister, Scott Morrison.

For the remainder of the first week abroad, Markle will reportedly continue to reduce her engagements. The royals still have several more stops on the tour ahead, so the couple will need their energy. According to Kensington Palace, Markle and prince Harry will travel by charter flight to Fiji on Oct. 23, for a three-day program of events. After, they'll travel to Tonga, where they are also scheduled to tour the country. Before returning to the United Kingdom, the couple will stop back in Sydney for the Closing Ceremony of the Invictus Games. The event will take time to honor the achievements of the of the competitors, and both the Duke and Duchess are scheduled speak.

This packed itinerary would be tiresome even without additional health considerations, and the couple has made adjustments to look out for Markle's health. On Sunday, Prince Harry told audiences during the medal ceremony for his wife was resting as "being pregnant takes its toll", according to ABC News.

On Friday, Markle opened up about her pregnancy during an event for OneWave, an organization that tackles mental health through surfing. According to E! News, Markle reportedly told crowd member Charlotte Waverly that the baby was making her tired. "Meghan told me that pregnancy was like having jet lag. She said she was up at 4:30 a.m. this morning doing yoga in her room as she couldn't sleep," Waverly told the publication. "It's a bit of a double whammy for her, she said, as she has both the baby and jet lag to contend with."

The exhaustion would make anyone need rest, so it makes sense that Markle needs to sit out a few events for the remainder of the week. The couple will likely continue to make choices that balance the demands of the trip with her personal well-being for the rest of the tour. In some instances, the schedule does accommodate for Markle. For example, Markle will not attend a plaque unveiling and tree planting ceremony with Prince Harry in the forest of Fiji, and will instead meet with UN leaders for a summit on women.

The Duke and Duchess of Sussex might need to cut back on some of the activities planned during their time abroad, but it's clear the trip has already been productive. The two have already helped the Invictus Games get off to a positive start, and will continue their environmental and conservation based efforts abroad. Even if Markle needs a bit of time to rest between events, it's still shaping up to be an eventful tour.