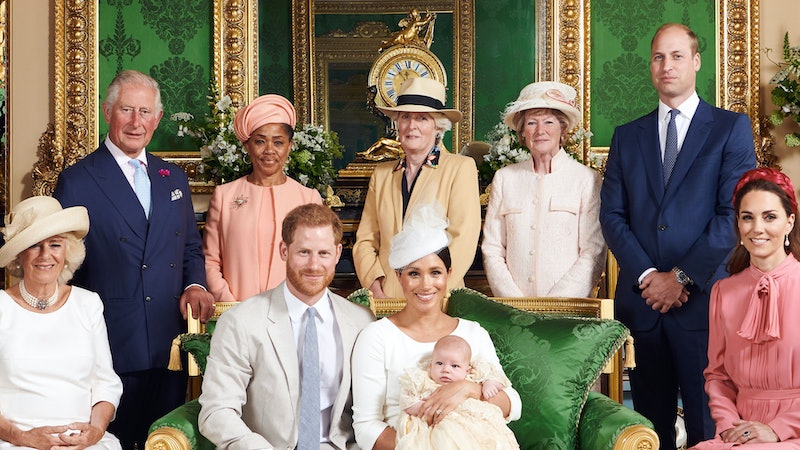 On July 6, the Duke and Duchess of Sussex shared two seriously adorable photos from their son’s christening, including one with members of the royal family. This photo, taken in Windsor Castle’s Green Drawing Room, is very special as it revealed that Princess Diana’s sisters were at Archie’s christening. Lady Jane Fellowes and Lady Sarah McCorquodale can be seen standing between their nephew Prince William and Meghan Markle’s mother Doria Ragland.

Harry and William have remained extremely close to their aunts since their mother’s passing, and as Harper’s Bazaar reports, Fellowes “was one of the first family members” to meet Archie, according to journalist Robert Jobson. Fellowes, McCorquodale, and their brother Charles Spencer were also a significant part of Harry and Meghan’s wedding, as the couple were “keen to involve his mother’s family in the wedding” as stated by Kensington Palace in May.

It is not currently known why Diana’s brother wasn’t featured in the family portrait, but, as The Today Show reports, he was one of the first to learn of the birth. Another family member that was notably absent was the Queen, but this was due to “a prior commitment,” as was the case with Prince Louis’s christening last year, Hello reports.

Despite the absence of Archie’s great-grandmother, the Duke and Duchess of Sussex made sure that their son’s christening was a private affair — taking place “in the private chapel inside Windsor Castle, rather than at St George’s Chapel where Harry and Meghan were married.” And even though news outlets weren’t allowed to take photos of the family arriving and leaving the chapel, the couple’s photographer Chris Allerton was on hand to capture this special occasion.

Allerton, a fashion photographer, also documented Harry and Meghan’s wedding last May which also included a picture of the couple and the royal family in the Green Drawing Room. It seems as though Allerton has become the Duke and Duchess’s family photographer, and I can’t help but get excited over future family occasions, and the moments he’ll capture. “I am honoured to take the official photographs at the christening of Archie Mountbatten-Windsor, and to once again, be part of such a special and joyous occasion for the Duke and Duchess of Sussex,” he said in a statement via the Evening Standard.

Other than what Allerton photographed and what the Sussex’s shared via their Instagram post, not much else is known about Archie’s christening as it was on the down-low. Although, they did thank the public for their support and the overall happiness shared over such a special occasion on their Instagram account, along with a brief history behind the gown Archie can be seen wearing.

“The Duke and Duchess of Sussex are so happy to share the joy of this day with members of the public who have been incredibly supportive since the birth of their son,” @sussexroyal wrote on Instagram. “They thank you for your kindness in welcoming their first born and celebrating this special moment.”

“Their Royal Highnesses feel fortunate to have enjoyed this day with family and the godparents of Archie.”

More like this
This Dark Humpty Dumpty Theory Will Haunt You
By El Hunt
Every Season Of 'Love Island' Ranked Best To Worst
By Alice Broster, Frances Stewart and Sophie McEvoy
Jennifer Coolidge Slid Into Ariana Grande’s DMs In The Most Iconic Way
By El Hunt
Laura Anderson Pulled The Ultimate Girl Power After Her Break-Up
By El Hunt and Megan C. Hills
Get The Very Best Of Bustle/UK
Sign up for Bustle UK's twice-weekly newsletter, featuring the latest must-watch TV, moving personal stories, and expert advice on the hottest viral buys.