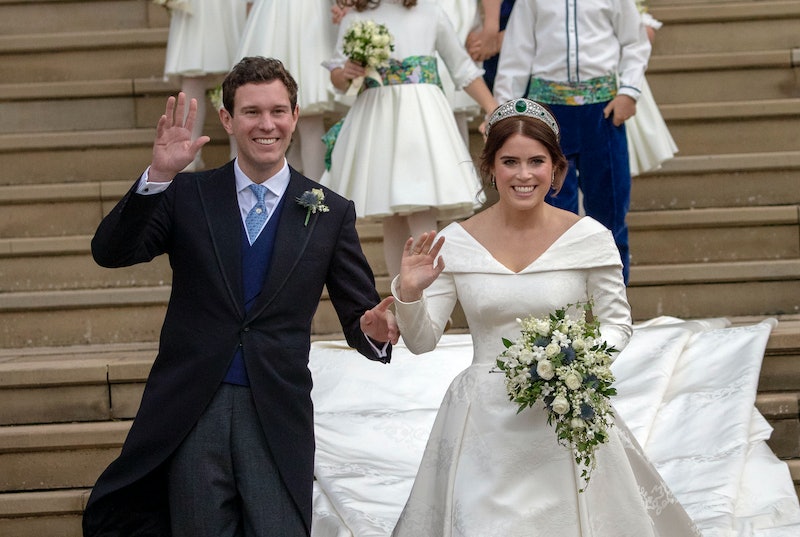 After an epic 8-year courtship, Princess Eugenie and Jack Brooksbank finally said "I do" before a global audience of family, friends, and adoring onlookers on Friday, Oct. 12. But the ceremonious proceedings didn't stop there. One day later, Princess Eugenie fulfilled a special royal wedding tradition that's been carried out for generations, as reported by People. Those who've kept up with the details of royal weddings past might be familiar with this especially meaningful custom, which pays homage to fallen soldiers who've died in war.

According to a tweet from Westminster Abbey's official Twitter account over the weekend, that tradition calls for the royal bride to place her wedding bouquet atop the Tomb of the Unknown Warrior (sometimes called the Grave of the Unknown Warrior) housed inside the Abbey. Obviously, in this case, the royal bride was Princess Eugenie, and she furthered the tradition, as many brides in her place have done before, some 24 hours after tying the knot with Brooksbank on Friday.

"Princess Eugenie's wedding bouquet has been placed on the Grave of the Unknown Warrior," read Westminster Abbey's tweet, which it shared via the social media platform early Saturday morning, Oct. 13.

Fans of Britain's beloved Royal Family might remember Meghan Markle's bouquet-laying ceremony inside the Abbey earlier this year, following hers and Prince Harry's royal wedding. In fact, if you followed the goings-on of pretty much any royal wedding over the last 100 years — yes, Prince William and Kate Middleton's included — then this probably isn't the first time you're hearing about the Unknown Warrior's grave and its connection to nuptial celebrations within the monarchy.

Per Westminster Abbey's official write-up, the bouquet-laying gesture is a symbolic one. Explaining the meaning behind this particular post-wedding royal tradition, it said,

"The Warrior's Grave stands as a remarkable tribute both to the fallen of the First World War and to all those who have died since in international military conflict."

The tradition began way back in 1923, when Queen Elizabeth, the Queen Mother — AKA the current Queen Elizabeth's mom — spontaneously placed her own wedding bouquet on the grave as she approached the altar at Westminster Abbey before marrying King George VI. The gesture was symbolic even then, since the Queen Mother did it to honor the memory of her older brother, Fergus Bowes-Lyon, who died in combat during World War I.

Today, the traditional bouquet-laying ceremony typically doesn't happen on the actual royal wedding day. But, in paying homage to the Queen Mother's original gesture, the bouquet of flowers Eugenie placed on the Grave of the Unknown Warrior Saturday morning was the same one she carried down the aisle some 24 hours earlier, when she and Brooksbank officially wed. Those who watched Friday's royal wedding (or saw any of the gorgeous wedding photos that rolled in later) know Eugenie's bouquet was lovely and exceedingly regal.

As it turns out, in addition to the bouquet's visual majesty, Eugenie's floral collection held some royal significance, too. According to the Royal Family's official website, which features a helpful run-through of major royal wedding traditions and the meanings behind them, "many Royal Brides across the generations ... have chosen to carry a sprig of Myrtle in their bouquets." To none's surprise, in keeping with that tradition, Eugenie's wedding bouquet included a sprig of myrtle, too. According to the Royal Family's website, myrtle represents love, fertility, and innocence, and it's been homegrown at Queen Victoria's "holiday home" in the south of England for nearly 200 years.

So, after learning a bit more about the Grave of the Unknown Warrior and its important connection to the monarchy's history, it seems the Royal Family (Princess Eugenie, in particular) couldn't have ended the year's second bout of nuptial-related celebrations in a more perfect way.