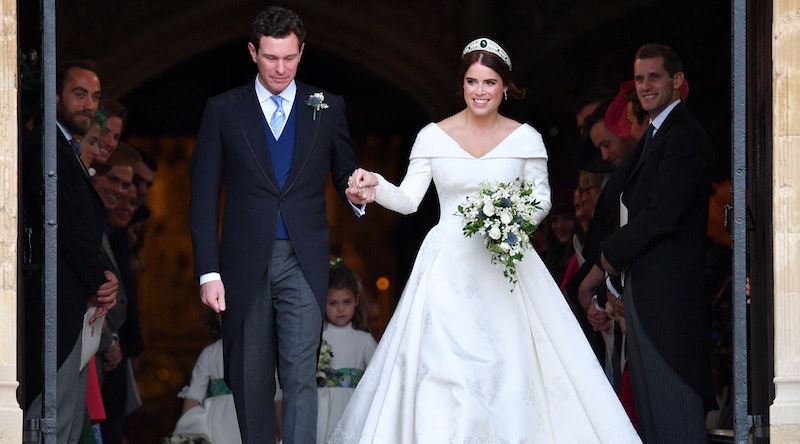 Princess Eugenie's wedding to Jack Brooksbank was nothing short of a fairytale. From the hoards of adoring fans to the celebrity guest list and the incredible outfits, it was a day that allowed Eugenie to truly be in the spotlight. And while her simple, clean cut white wedding dress was designed by Peter Pilotto, it was the incredible blush Zac Posen gown she wore later on that really grabbed my attention. Luckily for us, designer Zac Posen just shared a new photo of Princess Eugenie's second wedding dress — and unsurprisingly, she looks stunning.

In a never-before-seen photo, the designer is seen kneeling behind Eugenie, holding the train of her elegant evening dress. Alongside the image, Posen sweetly wrote the following, in honour of the Princess' birthday:

"Every now and then you meet somebody who just knocks your socks off. This last year I got to know a young lady who possessed natural elegance, a heart of gold and sophisticated humor. My studio and I had the honor (and the best time) collaborating with her on her special gown. Best of all she is dedicated to using her privilege to help our world and its people with her project @the_anti_slavery_collective. Happy Birthday! @princesseugenie"

Eugenie wore the special dress for her evening celebrations after the wedding ceremony during the afternoon. There are few pictures available of the Princess in the dress, as the evening was closed off to the public. The below image of Eugenie and her new husband Jack Brooksbank.

The beautiful Zac Posen creation is currently on display at Windsor Castle for the public to see, along with the Peter Pilotto wedding gown she wore, and the suit Brooksbanks donned for the occasion. If you want to have a chance to see it though, you'll need to be fairly quick, as it's only there until April 22.

In audio commentary recorded to accompany the display, Eugenie revealed her Posen gown was inspired by Grace Kelly.

“I wanted something reminiscent of Grace Kelly in To Catch a Thief so I showed that for reference and Zac came up with this silk that he’d found from Manchester. Every single draping effect, every single detail, every button, it’s all painstakingly done by him and his team," she explained.

She also spoke highly of Posen in the recording, naming him “such a cool, fun, brilliant designer and friend.”

Eugenie also revealed how and why she picked the design of the first wedding dress she wore, honing in on its low back in particular, which showed off her scoliosis scar.

“I had always wanted a low back, part of it was showing my scar. I believe scars tell a story about your past and your future and it’s a way of getting rid of a taboo," she said on the commentary.

She added: “For me it’s a way of communicating with people who are going through either similar situations with scoliosis or having a scar of their own that they are trying to deal with.”