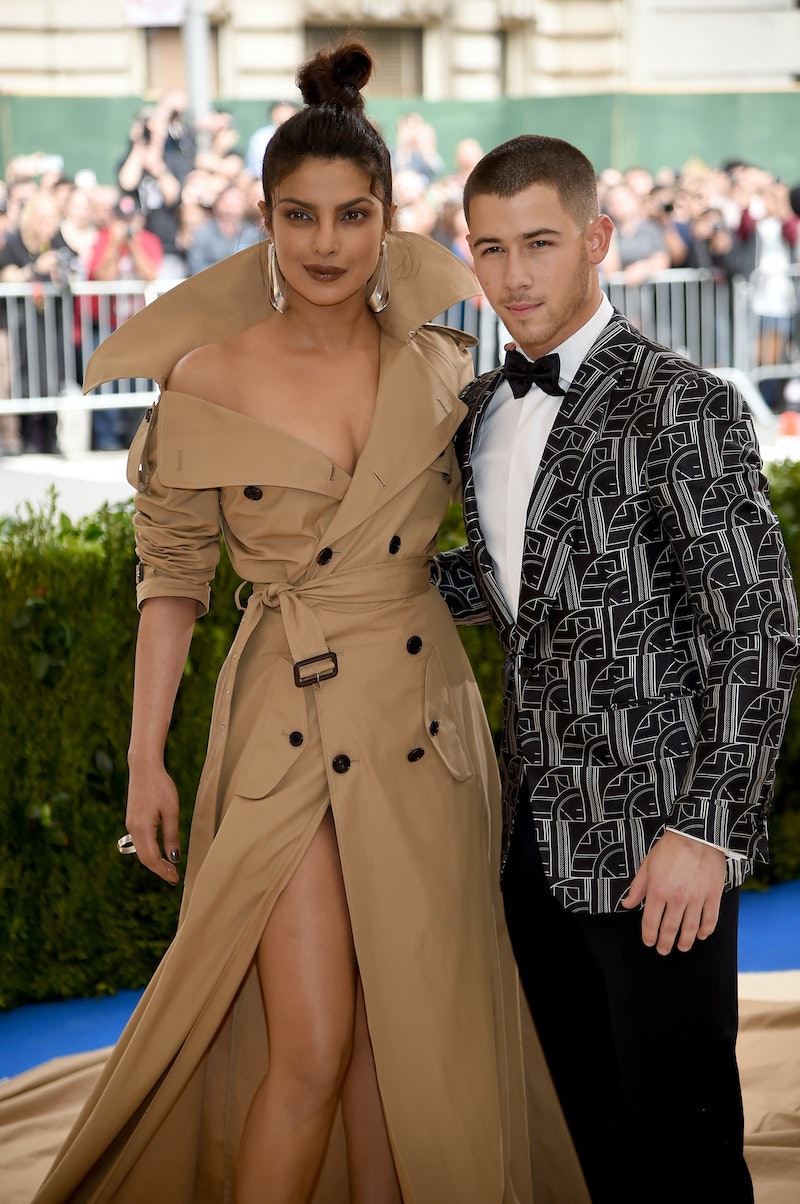 The summer of love is fully on, because there's video of Priyanka Chopra at Nick Jonas' concert, and she posted it herself. The actor, 35, and the musician, 25, have reportedly been dating since the spring, though only UsWeekly has stated that an unnamed source "confirmed" it to the magazine. So, take the relationship with a grain of salt, but consider this: They're one heart eyes emoji away from dethroning Ariana Grande and Pete Davidson as most PDA-obsessed couple of Summer 2018.

On Saturday, June 30, Jonas played a show at a stadium in Brazil. Chopra was in attendance, which fans know, because she posted video to her Instagram story of the event. In addition, the actor uploaded an image that zoomed in on Jonas' face on a stadium screen, writing "Him" in large white letters, accompanied by — what else? — a heart eyes emoji.

Honestly, they might even have coordinated some couples captions. On June 22, Jonas posted a photo of Chopra to Instagram stories while they were abroad and titled it with a simple "Her". If they were hoping to keep things under the radar, they'll have to try a little harder. Until a representative for either party makes a statement, the Chopra-Jonas couple will basically be Hollywood's worst kept secret.

The surprising pairing of the actor and singer isn't just a Tumblr fanfic come to life. After attending at least one red carpet event together, the two have been spotted looking romantic in more than one city — including Chopra's native Mumbai. Considering the jet-setting, the Instagram story captions, the comments he's left on her photos, and the confirmation rumor, it really seems like Chopra and Jonas are full-on dating. Is it weird to totally love that? It's not, right? They seem psyched and pretty into each other. You almost don't know which one to be more proud of.

Chopra's romantic life has long been scrutinized by fans eager to see her find her happily ever after. The Times of India previously reported on rumors that suggested the actor was secretly married to a mystery man — rumors that were kick-started by her decision to wear certain items of jewelry. Chopra shut those down on Twitter on April 30:

Hahahah!heights of speculation! This is an evil eye guys! Calm down! I’ll tell u when I get married and it won’t be a secret! Lol

So, she insisted she'd tell fans when she got married — but not, necessarily, if she was in a relationship. Just something to think about, for all the Chopra and Jonas relationship truthers out there. Also, remember these photos? Because they're both positively glowing in them:

If that's not the look of brand-new, all-consuming passionate love, then what is? Also, this wouldn't be Jonas' first relationship with a slightly older woman. And In 2017, Jonas told iHeartRadio that his single "Find You" was all about being open to love:

"'Find You' is about a lot of things. For me, it's got a lot to do with just the idea of finding love, in general, and the journey we all go on with that. And how sometimes, it can be something you're afraid of and running away from it in that sense, but it is desperately something we all hope for."

At the time, the singer was reportedly single. Is it possible that he's read The Secret? Was he putting "Find You" out into the universe, in the hopes that he'd find Priyanka Chopra before too long (or that she'd find him)? If so, Jonas: Excellent work. You done did it.