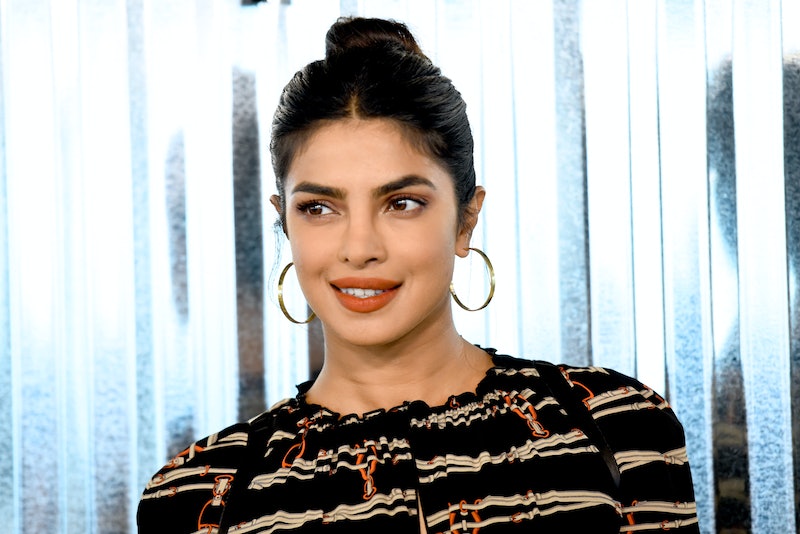 Forget Quantico — Priyanka Chopra is looking to move out west and settle in Oregon and the town of Rajneeshpuram. During an appearance on The Ellen DeGeneres Show on Wednesday, Jan. 30, Chopra revealed that she is making a film based on Netflix's Wild Wild Country documentary, which became a massive hit after its release on the streaming platform in March 2018.

The docuseries centered on the life of the controversial guru Bhagwan Rajneesh — also known as Osho — his ruthless assistant, Ma Anand Sheela, and their followers who came together in the 1980s to create their own community by building a town in rural Oregon. The Rajneeshees focused on a quest for spiritual enlightenment through practices like meditation and free love, but in the face of backlash from Oregon residents and accusations that they were a cult, the group were accused of everything from attempted murder to a bioterror attack.

According to Chopra, the proposed film will focus on Sheela, who became the documentary's breakout subject. "I'm developing a feature with Barry Levinson — he did Rain Man, and he's an iconic American director," Chopra told host Ellen DeGeneres. "We're developing it as the character of Sheela, who was this guru who originated from India, his right-hand woman. And she was just devious and created a whole cult in America, brought people here."

Not only is Chopra developing the film, she also plans on starring in it and acting as producer. "I'm developing that next for me to star in and produce, which I think will be really cool," she added.

According to Vice, Sheela first became a follower of the guru Rajneesh back in the early days of his teachings, in Pune India. In 1981, after the guru was facing allegations of tax evasion, smuggling, and violence, Sheela and her then-husband Marc Silverstein purchased a 64,000 acre ranch in Oregon for the Rajneeshees to move to and continue their practices away from the eye of the Indian government.

However, the residents of the small towns surrounding the ranch weren't happy about their new neighbors, and tensions between the Rajneeshees and the Oregonians began to flare, as detailed in the docuseries. According to Slate, things escalated to the point that Sheela allegedly concocted a plan to poison those who opposed the Rajneeshees, and was accused of using a bag full of homemade salmonella to poison 10 salad bars in the area with the help of some followers. The attack made 751 people sick and caused 45 of them to require hospital treatment.

In 1986, Sheela was arrested and pleaded guilty to the salad bar poisoning, according to The Oregonian, and served two years in prison. After her sentence, she left the country and eventually settled in Switzerland, where she remained out of the spotlight until she was interviewed for Wild Wild Country. "I am labeled a criminal. It is stamped on my forehead," she told The Oregonian. "I have been punished."

In addition to working on the big screen adaptation of Wild Wild Country and starring opposite Rebel Wilson in the upcoming rom-com, Isn't It Romantic?, Chopra has been enjoying newlywed life with Nick Jonas. "He's nice. It shocks me how he's not been corrupted," the actress recently gushed to DeGeneres about her new husband. "You know when you're in entertainment for such a long time? He's so family driven and it's all about his parents. He's just really nice and sweet."

Another thing that Chopra appreciates about her husband is that he supports her career and her drive to succeed. In Vogue's January issue, she recounted her first date with Jonas, where the singer told her, "I love the way you look at the world. I love the drive you have." It meant a lot to the actor, who said, "As a girl, I’ve never had a guy tell me, 'I like your ambition.' It’s always been the opposite."

With so many interesting projects on the horizon for Chopra, it seems as if her career won't be slowing down any time soon — and like Jonas, that's one of the things that her fans love about her.

More like this
Here’s Everything Coming To & Leaving Netflix In October
By Jake Viswanath
What’s New On Netflix: Ana De Armas’ 'Blonde' & A Nick Kroll Special
By Arya Roshanian
Gabby Petito’s Family Responded To The New Lifetime Movie About Her Final Days
By Grace Wehniainen
Lindsay Lohan & Jonathan Bennett Celebrated Mean Girls Day Very Differently
By Jake Viswanath
Get Even More From Bustle — Sign Up For The Newsletter