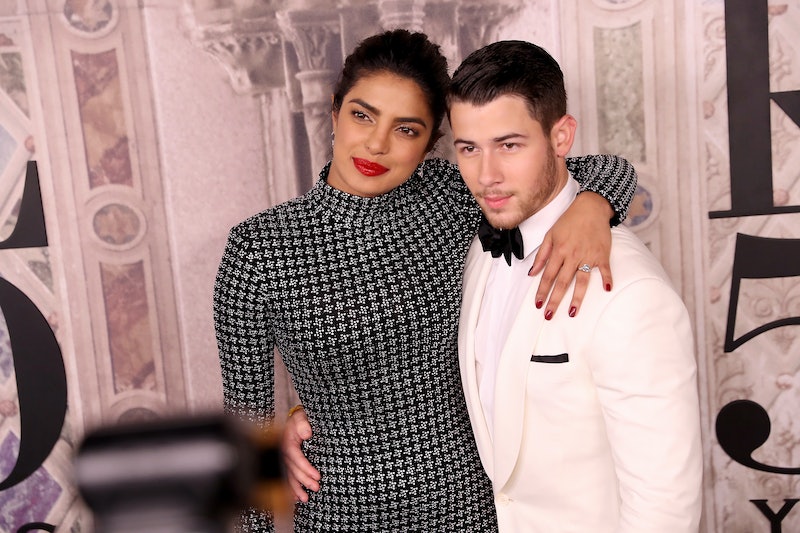 The wedding celebrations have continued for two of Hollywood's favorite newlyweds. As People noted, Nick Jonas and Priyanka Chopra had a southern wedding reception recently, and it was one that had a very special meaning for the Jonas family.

According to People, Jonas and Chopra had yet another celebration on Jan. 27, this time in North Carolina. This latest party was held at Kevin Jonas Sr.'s own Nellie's Southern Kitchen, located in Belmont, North Carolina, which just so happens to be where the Jonas family patriarch grew up. Additionally, the restaurant was inspired by Kevin Sr.'s mom and the "Jealous" singer's grandmother, Nellie Jonas, who passed away in 2011, per E! News. Considering that information, it was definitely super special for Jonas and Chopra to have one of their wedding celebrations at the restaurant.

E! News also revealed some other fun details about their party. According to the publication, a sign read inside the restaurant, "Nick and Priyanka just got hitched but that knot that they tied has not been dipped in gravy or honey or hot chicken grease," and continued, "So it's time we throw them a Nellie's Southern feast. Mama and Papa J invite you with pride to come celebrate their boy and his bride."

Based on photos and videos, Chopra and Jonas arrived at the party in style and were greeted by all of their friends and family. And as multiple sources noted, it sounds like the couple's latest celebration, unsurprisingly, went off without a hitch.

As you'll recall, this was not Chopra and Jonas' first wedding celebration, or even their second or third. The newlyweds first exchanged vows in early December in Jodhpur, India when they first had a traditional Hindu ceremony on Dec. 1, followed by a Christian ceremony on the following day. These ceremonies were followed by their first wedding reception, which was held in Delhi, per People. At the time, Chopra opened up to People about the couple's religious ceremony mash-up, saying:

"We took beautiful traditions that we both grew up with and personalized them in a way that made sense for us. It’s been incredible to find the commonalities between our beliefs and figuring out how to blend them in a respectful and meaningful way.”

In late December, the couple had two more celebrations in India. They had another reception on Dec. 19 that was thrown by the bride's mother, Madhu Chopra, followed by another that was held for their Bollywood industry friends, according to TMZ. So, the partying really hasn't stopped for Chopra and Jonas for quite a while.

At their second wedding reception on Dec. 19, Chopra made a lovely speech in honor of her husband, the attendees at the event, and her friends and family, including a special mention of her father, Ashok Chopra, who passed in June 2013. She said, in part, according to E! News:

Seeing as though Chopra and Jonas' receptions have been full of love, fun, and such touching personal ties to their families, it's really no surprise that the couple doesn't want the wedding fun to stop.