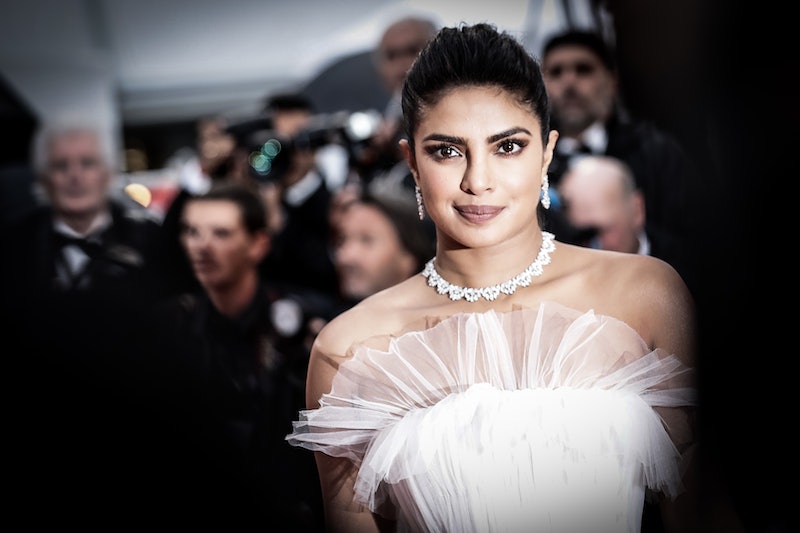 Priyanka Chopra is having a moment. In the last year alone, the actor co-starred alongside Rebel Wilson in Isn't It Romantic, attended the Royal wedding, and had a lavish celebration of her own when she married Nick Jonas in December 2018. But before Chopra fully ascended in Hollywood, she had an enviable Bollywood movie career. In the latest issue of InStyle, Chopra discussed her transition from Bollywood to Hollywood, including the cultural stereotypes the performer encountered along the way.

After winning the 2008 National Film Award, which is India’s version of the Oscars, for the movie Fashion — America came calling. But Chopra, who had starred in more than 50 Bollywood films, told InStyle that she was weary of stereotypical depictions of Indian characters in Western culture. And so, when she made the leap to Hollywood, she made it a point to look for roles that were unexpected. "I knew that American pop culture was not used to seeing Indians outside the box," Chopra explained. "I was definitely not signing up for something like My Big Fat Punjabi Wedding. Or something where people would see me as a Bollywood actor with, like, 15 people coming out of a car and all of those stereotypes. I wanted to be able to shift that narrative, because that's the India I know."

In 2012, ABC’s then-executive vice president of talent and casting, Keli Lee, approached Chopra about being on a TV show. However, Chopra had clear ideas about the types of roles she'd be open to playing. The Baywatch star told InStyle, "What does it take for an Indian or a South Asian actor to not be so different and alien? Why can't you see them as a lead?" She continued, "I told Keli that I don't want my ethnicity to dictate the part or what my character does. It should be about the story. I'm an actor, and it's my job to deliver." After reviewing more than 20 scripts, Chopra signed onto Quantico, where she starred as an FBI recruit for three seasons.

Looking back at her career thus far, Chopra told InStyle that she wants an industry "where your ethnicity is your asset, not your identity. I want to create that opportunity for many more actors from outside the U.S. — and it doesn't have to be just Indians — to come into global entertainment and be up for lead parts without having to just play, you know, what their ethnicity defines."

Upcoming projects for Chopra show her embracing her inclusive mission. Chopra and Jonas are reportedly developing a reality TV show based on India's rehearsal dinner tradition of musical performance called A Week to Sangeet, she's starring as Ma Anand Sheela in an adaptation of the Netflix doc Wild, Wild Country, and she's working on a rom-com with Mindy Kaling about a wedding that takes place both in India and America. "Whenever you see Indian characters in Hollywood movies or on TV, the four or five people who have made it here — like Mindy or Aziz [Ansari] — had to write their own stories to be able to achieve them," Chopra told InStyle.

Chopra's path from Bollywood to Hollywood was paved by leaving stereotypes behind — a move that clearly paid off. And she isn't stopping any time soon.