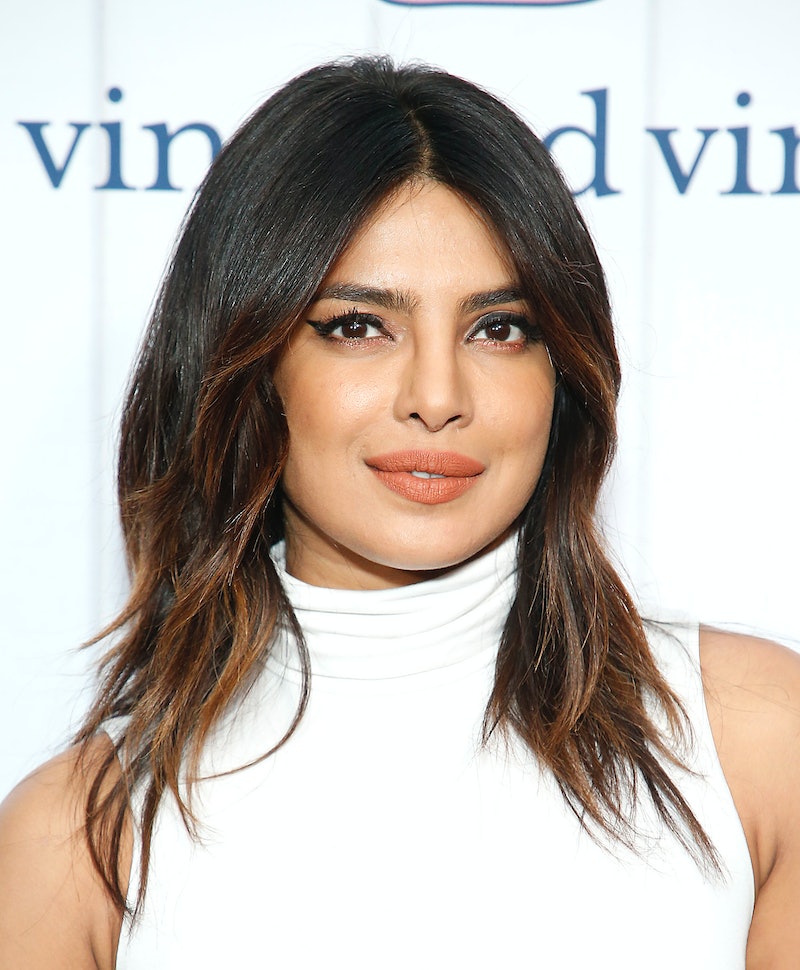 Turns out, becoming a Jonas comes with an added bonus. After marrying Nick Jonas in December, Priyanka Chopra's relationship with Sophie Turner and Danielle Jonas became the sweet sisterhood she hadn't gotten to experience before. "I've never had a sister, so it's really nice to have Danielle and Sophie, and just inheriting the family by proxy," Chopra shared in the August issue of Elle UK. "Sophie is super talented, super funny and we have the most fun when we go out together."

In addition to costarring in the Jonas Brothers' "Sucker" music video with her sisters-in-law (aka the "J Sisters"), the former Quantico star recently supported Turner at her second wedding ceremony with Joe Jonas on June 29. Chopra's presence was surely appreciated, as she's been a source of wisdom for her new sis. In an April interview with Harper's Bazaar, Turner shared Chopra's advice for appearing so confident.

During an April interview with Entertainment Tonight, Nick also commented on Chopra's friendship with her new in-laws. "I mean, it's kind of a dream where, as close as we are as brothers, that our wives and fiancée are so connected as well," he said.

According to Joe, Chopra and Turner knew each other before they had even met. Turner filmed X-Men on the same lot where Chopra worked on Quantico. which, as he told AOL in December 2018, "made it even more special once Nick and Pri obviously got together."

Added Joe, "They have this camaraderie now that they feel is not only friendship, but it's family. That's what every brother wants. You want to have that relationship where everyone looks out for one another."

Of course, the change in Chopra's immediate family has been another adjustment. "It's so different," she added to Elle UK of married life. "I'd never realized having a husband and a boyfriend are such different things. When you say your vows, it's like, this person is my family, and it's the family I chose. There's a weird responsibility to them. And a safety that comes from it. We are learning about each other every day."

Now, as Chopra also revealed to Elle UK, she and Nick may be buying a place in London "at some point," nothing that she feels "connected to the city" whenever she visits. That could have something to do with another sister figure, Chopra's close friend Megan Markle AKA the Duchess of Sussex lives nearby.

"Megs… she was always meant for big things," added the actor. "To be a change and be an important voice in doing that. It’s amazing that she found that calling and has the platform to be able to do it."

It appears that Chopra's extended family — both chosen and inherited — is the perfect crew for her.

More like this
Priyanka Chopra & Nick Jonas’ Matching Tattoos Have A Romantic Meaning
By Radhika Menon
Keyla Monterroso Mejia Is Finally The Star Of The Show
By Gabrielle Bondi
At 28, Rosie Perez Risked Her Career To Stop Playing Stereotypes
By Gabrielle Bondi
At 28, Debra Jo Rupp Was Living A Much Different '70s Show
By Grace Wehniainen
Get Even More From Bustle — Sign Up For The Newsletter
From hair trends to relationship advice, our daily newsletter has everything you need to sound like a person who’s on TikTok, even if you aren’t.