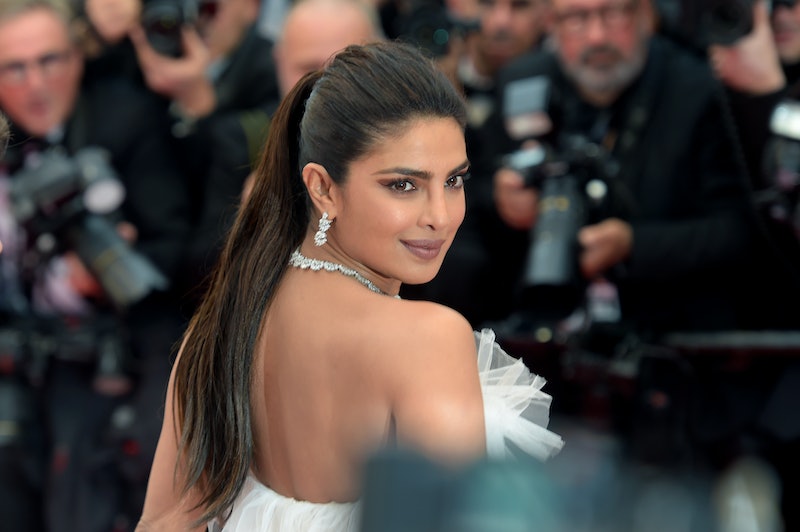 Priyanka Chopra is feeling doubly thankful this Father's Day. The Isn't It Romantic star paid tribute to both her late father and new father-in-law Paul Jonas for Father's Day on Instagram. Chopra's Father's Day posts show that not only does she honor her own family's memories, but she's embracing her place in the Jonas clan as well.

Chopra posted a photo of herself and Paul., father of Kevin, Joe, Nick, and Frankie, on the 'gram along with the caption: "Happy Father’s Day @papakjonas I feel blessed to have you and @mamadjonas in my life! Thank you for taking me in as your daughter with so much love and warmth Love you loads.#HappyFathersDay," alongside heart and smile emojis.

Chopra became an official member of the Jonas family in December 2018 when she married Nick in both Indian and Christian ceremonies. On December 1, Chopra posted a series of photos from the wedding festivities along with a caption that directly addresses the blending of two families and cultures. Chopra captioned the post:

"One of the most special things that our relationship has given us is a merging of families who love and respect each other's faiths and cultures. And so planning our wedding with an amalgamation of both was so so amazing. An important part of the pre wedding rituals for the girl in an Indian wedding is the Mehendi. Once again we made it our own and it was an afternoon that kicked off the celebrations in the way we both dreamed."

Chopra's own father, Ashok, passed away in 2013, but the Quantico star also took time during the holiday to pay homage to her late father. Chopora captioned a throwback father-daughter photo, "Father's Day on moms birthday.. it's almost like dad is here celebrating with us. Don't need a day to miss and appreciate you dad. I love you. #HappyFathersDay#daddyslilgirl for life."

Nick posted his own appreciation for both his dad and Chopra's on Father's Day, as well. Next to a photo of himself as a kid with Paul, Nick posted the same nostalgic father-daughter pic as his new wife. He wrote, "Happy Father's Day to all the fathers out there. I hope to be half the father you are dad. I love you very much... and I so wish I could have had the chance to get to know you Ashok sir. Thank you for bringing such an incredible woman into this world." Chopra commented on the photos, "you’re so sweet. I love you."

Six days earlier, Chopra paid tribute to her father on the anniversary of his death. Alongside a photo of Chopa sitting in a tree with a smile, near her father, the actor wrote, "6 years. Seems Like just yesterday we lost you..I miss you Dad. Inexplicably." Nick responded to the post with a single heart emoji. While her father-in-law wrote, "All our love sweet Daughter-in-Law. Nothing can replace such a special man but we are here to surround your heart with love and support."

Last August, Chopra wished her father a happy birthday on the social platform with a slideshow of photos featuring Ashok, set to Michael Bolton's "Fathers & Daughters." Chopra captioned the post, "Dad. U r so missed. Happy birthday. Always and forever."

Clearly, the love Chopra has for her father runs deep. But, her recent marriage has brought an additional father figure to the activist and performer's life.