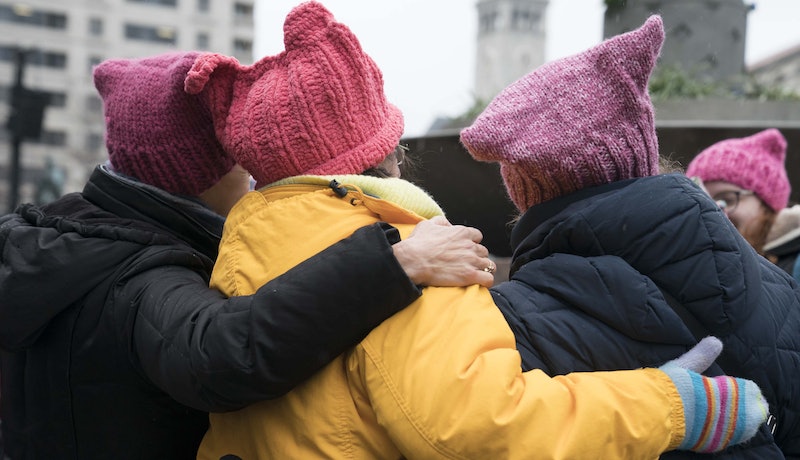 Ever wondered about the origins of the Extinction Rebellion’s logo or how the pussyhat became synonymous with the Women’s March overnight? Consider this your starting point. First and foremost, protest is about people taking to the streets and mobilising against injustice – but the art, logos and objects that come to represent these uprisings are often striking. In honour of International Women's Day, Bustle looks at the origins and significance of protest design through six historic objects, from the AIDS Memorial Quilt to Pride T-shirts. First up: the pussyhat.

In the summer of 2017, the Women’s March took the world by storm. Held the day after the US president Donald Trump’s inauguration, an estimated 4.4 million people marched around the world to protest en masse against the misogyny of the new American leader. It became the biggest single-day demonstration in U.S. history, and (thanks to a Women's March offshoot that took place in Antarctica) it also spanned seven continents,

Wielding homemade placards, many thousands of the Women’s March protesters wore pink wooly hats - on the day of the protests, the packed streets were filled with bobbing heads, topped off with knitted fuschia cat ears.

Where did the pussyhat come from?

Created by two women in LA – screenwriter Krista Suh, and artist and design architect Jayna Zweiman – the Pussyhat borrows its name from an infamous remark made by Trump in a video tape from 2005. In the footage, he boasts of approaching a woman and kissing her without warning. “You can do anything,” he gloats. “Grab ‘em by the pussy”. It’s a truly disgusting remark, which speaks to Trump’s attitude towards women; in the first 100 days of his presidency alone, he slashed funding for the National Domestic Violence Hotline, repeatedly attacked abortion rights, and nominated Brett Kavanaugh – a man accused of sexual assault – to the supreme court.

The pair decided to start knitting Pussyhats when Zweiman – who was recovering from an injury – couldn’t go to the Women’s March. She wanted to find another way to support the effort from home, and so their friend, Kat Coyle, came up with simple knitting, sewing, and crochet patterns for a bright pink hat. In November 2016, they officially launched the project online, and two months later, the women reckoned that around 100,000 patterns had been downloaded.

“The Pussyhat was about co-opting the word and empowering the term for female genitalia as women’s power, as opposed to something of men’s pursuit,” explains Corinna Gardner, the V&A’s Rapid Response curator. There’s now a Pussyhat preserved in her collection at the London museum: “it’s a very sophisticated piece of protest design,” she says.

How did the pussyhat become so popular so quickly?

As with the Extinction Rebellion materials housed in the rapid response collection, the hat spread rapidly thanks to the internet. The knitting pattern was freely available online, and women formed impromptu craft groups, roping in family and friends to help. “The Pussyhat is a physical object, and people knitted in groups and came together. It was about translating a digital campaign into a real-world effort,” Gardner explains. “It’s a digital-analogue mode of protest.”

“What was interesting was that the Pussyhat was being knitted by many, and worn by many,” she observes. ”That sense of craft, care and warmth is within that object too. Knitting is a skill that is still perceived in a gendered manner,” she adds; stereotypically, it is seen as a domestic craft, rather than something fearsome or threatening. The Pussyhat, and the many protesters wearing them, subverted that. “There was this sense of female empowerment, largely being shouldered by women, but also being shouldered by feminists of other or multiple genders,” Gardner says.

Textiles have long been woven into the fabric of protest art; from memorial quilts and stitched banners, to home-made flags. It’s soft, but powerful. “I do think there’s a skill set that has been gendered, which is being deployed as an act of empowerment and resistance,” Gardner says. And in 2017, it was the Pussyhat that captured many people’s imaginations.

More like this
Women Around The World Are Cutting Their Hair In Solidarity With Mahsa Amini
By Darshita Goyal
The Queen’s Cause Of Death May Not Be Formally Announced
By Shahed Ezaydi and Catharina Cheung
Will Archie & Lilibet Attend The Queen's Funeral?
By Sam Ramsden
Deliveroo Is Selling Lotus Biscoff Cinnabons Now
By Darshita Goyal
Get The Very Best Of Bustle/UK