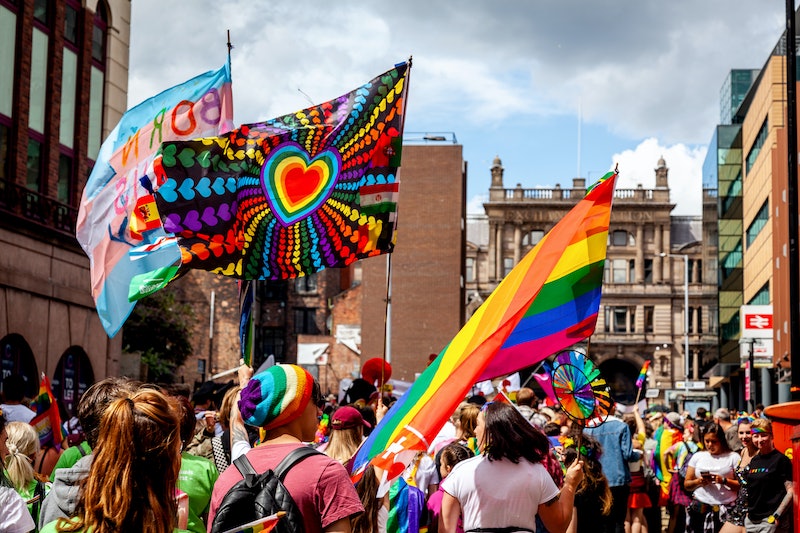 Ever wondered about the origins of Extinction Rebellion’s logo or how the Pussyhat became synonymous with the Women’s March overnight? Consider this your starting point. First and foremost, protest is about people taking to the streets and mobilising against injustice – but the art, logos and objects that come to represent these uprising are often striking. Through six historic objects – from the AIDS Memorial Quilt to the Pussyhat – Bustle looks at the origins and significance of protest design.

At the turn of the millennium, a bootleg company called The Workshop began printing their own satirical Pride T-shirts, with LGBTQ+ slogans that co-opted huge brand names. Ripping off the likes of Nike and Coca-Cola, just a few of their designs now have a permanent home at the V&A.

Where does humour in protest art come from?

“Humour and satire have always been part of that calling to account, calling for a different future,” explains Corinna Gardner, curator of the V&A’s Rapid Response collection. “There’s a long historic trajectory for that.” Political satire has been around since pretty much the beginning of organised politics: the Ancient Greek playwright Aristophanes was poking fun at Athenian politicians way back in 425 BC. Using comedy as a way of challenging figures in power is a tactic that still prevails.

At any given protest today, there’s likely to be a sea of quick-witted signs that make serious points. For September 2019’s Global Climate Strike – the biggest climate protest in history, to date – marchers got creative. ‘This is not what we meant by Hot Girl Summer’ read one standout sign.

When Donald Trump visited the UK in July 2018, an enormous Donald Trump baby balloon blimp floated over Parliament Square, complete with comb-over and a suspect tan. While October 2019 saw an Anti-Brexit campaigner’s sign go viral, comparing the UK leaving the European Union to Geri Halliwell leaving the Spice Girls and – the sign implied, to much Twitter backlash – falling flat in her solo career. They said it, not us.

Where does the ‘Dike’ T-shirt fall in the protest art timeline?

Gardner’s favourite T-shirt in the Rapid Response collection was made in 2000 by The Workshop, and as was their signature, it transforms a global brand into a protest tool for LGBTQ+ rights. To set the T-shirt in context, just a couple of years before it was made (in April 1997), TV presenter Ellen DeGeneres came out – appearing on the cover of Time magazine alongside the headline, "Yep, I'm Gay". While DeGeneres did receive a lot of support, her show was subsequently cancelled, a sign of the times being quite different to today.

Like the Pussyhat, which also features in the V&A collection, the T-shirt reclaims a word that was previously used as a slur. And at a time when the Pink Pound (coined in 1984 to refer to the spending power of the queer community) was less chased after by companies than it is today, the T-shirt co-opted a global brand to reclaim space in the heteronormative world.

Continuing a tradition of reclamation that began back in the 1970s, the word "dyke" is used as a playful, celebratory slogan: Nike becomes ‘Dike’, while the brand’s slogan ‘Just Do It’ becomes ‘Just Do Her’. “It’s a brilliant example of protest design, which brings attention to a cause through another visual language that’s very well known,” Gardner says.