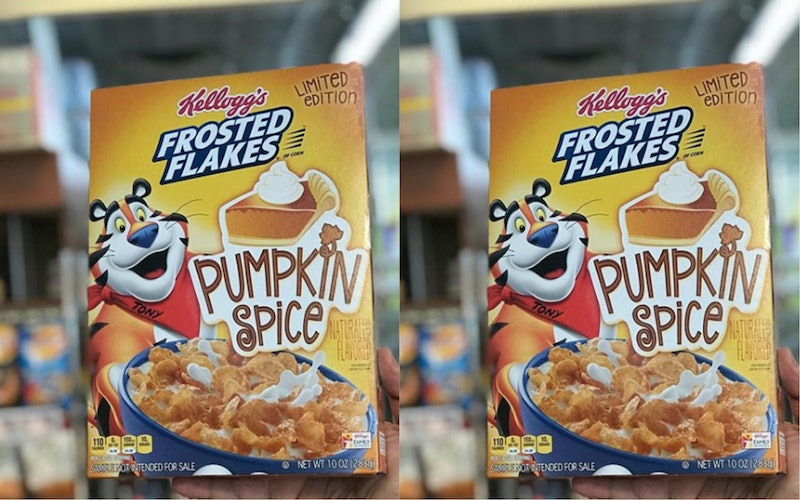 Every year, we mourn the end of summer and look to the one and only bright spot of fall: pumpkin spice everything. We've still got some time until the artificial flavoring is released full force, but a recent discovery has me giddy with excitement: pumpkin spice Frosted Flakes will be gracing the grocery store shelves in the fall. All other cereals of the non-pumpkin spice variety? Consider yourselves warned. Sleep with one frosted flakey eye open.

Bustle reached out to Kellogg's regarding the pumpkin spice Frosted Flakes, which have been circulating around Instagram accounts devoted to new grocery store offerings this week. According to Kellogg's, it is very much on the way, and will be launching in September. Per their description, "New Kellogg’s Pumpkin Spice Frosted Flakes has a warm pumpkin spice frosting that coats golden, crunchy toasted flakes. This tasty cereal has caramelized pumpkin aromatics delivering brown sweet cinnamon and a touch of allspice and ginger."

It looks like it was Instagrammer The Dolah Family who first got the ~scoop~, at which point their followers appropriately got lost in a downward spiral of pumpkin spice hullabaloo.

From that point on, there was no stopping it. JunkFoodMom got her hands on a sample box and wrote in a post, "Same Sweet delicious Frosted Flakes with a touch of pumpkin spice that’s not overbearing but there in every spoonful." Um, I'm pretty certain that's the absolute best balance of frosted sweetness and pumpkin spice. I can confirm I've personally spoken with Tony the Tiger about the new flavor, and he said they're grrrrrrrreat. I also have an unnamed source (me) who believes the sugary milk left behind will taste fan-freaking-tastic.

Instagram user @markie_devo also posted about it — their experience wasn't totally stellar, giving it a 6/10, but intuition tells me this won't stop be from sticking my head in a box and inhaling every last flake.

Doesn't that slice of pumpkin pie on the box look so realistic? I could almost lick it.

Frosted Flakes has taken other flavors for a ride in the past — like cinnamon and flakes with marshmallows (I still feel like this one crossed the line) — but this looks to be the first time they'll tackle the flavor of the fall. The real deal. The big kahuna. Pumpkin spice. This isn't something to be taken lightly. If you're going to venture into pumpkin spice territory, you better be ready to play with the big dogs.

Our pumpkin spice obsession knows no boundaries, and these flakes are hardly the end of the story when it comes to fall-flavored stuff. Pumpkin spice Oreos might very well make their return this year, to the joy of glasses of milk everywhere, and don't even get me started on pumpkin spice coffee creamer and Nonni's dark chocolate pumpkin biscotti. (I'm not drooling. YER drooling!) There's also this one coffee shop — IDK if you've heard of it... Starbooks? Starbricks? Anyway, apparently, they have halfway decent pumpkin spice lattes or something.

You can even eat pumpkin spice pizza, which... I.... I just... IDK. I'm torn. One side of me is like, "YAAAAASSSSS," and the other side of me thinks we should probably call it a day at pepperoni. I'll let you decide.

We're not just eating it, either. Our obsession has spilled into the cosmetics industry, with pumpkin spice highlighter, and even personal hygiene, with pumpkin spice latte deodorant. And to think all this time, I've been using the boho berry scent made with coconut butter. What have I been doing with my life?! No wonder people don't want to stand too close to me.

I don't care how basic it is. I'm going to eat and drink and wear all the pumpkin spice, and I'm going to do it in my Ugg boots and leggings-for-pants and Northface jacket on the way to brunch with my squad and my pits are going to smell amazing. I might even post a picture on Instagram so all the followers I don't have know what I'm up to. Sue me.

Look for pumpkin spice Frosted Flakes this September. Prepare to fight other people for them. And by "other people," I clearly mean me.