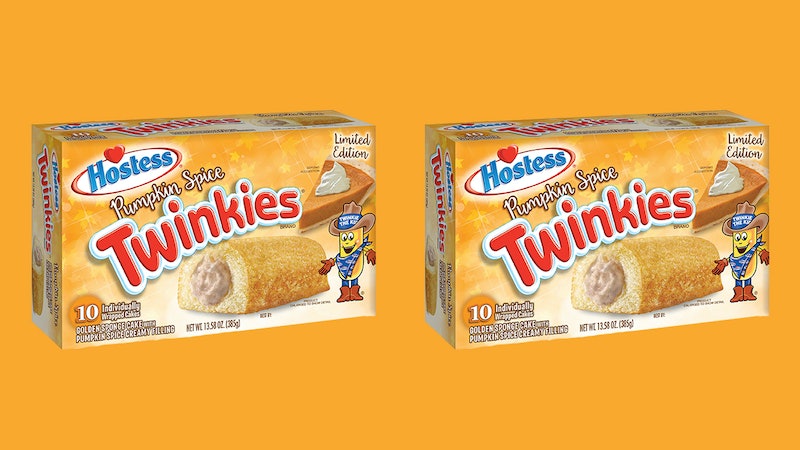 Do you feel that? The slight twinge of a nip in the air? A hint of the first leaves changing color? The promise of wearing sweaters once again? No? Is it still blisteringly hot where you are, too? Well, the grocery store is already in full fall mode because Pumpkin Spice Twinkies are back along with the literal hundreds of other pumpkin spice flavored ware. The weather may not be autumnal but our diets are about to be.

On Tuesday, August 20, Hostess announced on the return of their seasonal Twinkies on Instagram “We couldn’t wait for Fall to get here,” the caption reads, “so we’re bringing Fall to you.” The accompanying video shows boxes of Pumpkin Spice Cupcakes and Caramel Crunch Donettes falling into a pile of fall leaves. The real star of the show, however, is the Pumpkin Spice Twinkies, which are back for the fourth fall in a row.

According to the box description, these autumnal Twinkies features the “golden sponge cake” you’ve come to know and love—ya gotta stick with the classic, you know?—with a “pumpkin spice creamy filling” instead of the traditional, rather spice-less Twinkie filling. Is the Pumpkin Spice Twinkie an improvement on the original? Is it a strange departure? Is it a cry for help in this limited-edition, fall flavor, late capitalism era? It is probably all three, and it is probably delicious.

Pumpkin Spice Twinkies were first launched back in 2015. For the initial launch, a representative from Hostess confirmed to Delish that Pumpkin Spice Twinkies were exclusively available at Kroger stores. Bonus good news if you live near a Kroger: now, you can even order the limited-edition Twinkies on Instacart. Why leave your home for limited-edition snacks? Make the pumpkin spice come to you.

Fear not, Kroger-less friends, there is hope yet. You can buy Pumpkin Spice Twinkies on Amazon, but you’ll want to act fast as there’s currently only one box listed in stock. If you don’t happen to get your hands on that last Amazon box, Pumpkin Spice Twinkies also appear to be available at Walmart. However, you may have to do a little hunting to find a location in stock.

If you’re curious about how the Twinkies actually taste before you commit to a whole box, the Amazon reviews are...mixed. While they’re rated at 3.3 out of 5 stars, a nearly equal share of reviewers gave the Twinkies five stars as they did one star. Some claim the sponge cake in these Twinkies is “more dense and moist.” Others say theirs was crumbly and dry. Some found the pumpkin spice flavor to be an upgrade. Others preferred the original. Even pumpkin spice cannot please everyone.

In 2015, Tony Merevick did his internet community service by trying the Pumpkin Spice Twinkie for Thrillist. His verdict? It reaches the pumpkin spice bar but doesn’t elevate it. “It’s not until your second or third bite that the combination of the pastry's spongey butteriness and powerful cinnamon filling makes for a flavor that somewhat resembles a slice of pumpkin pie…” Merevick writes. “If it's been about 10 months since the last time you ate pumpkin pie. Which isn't exactly a bad thing.”