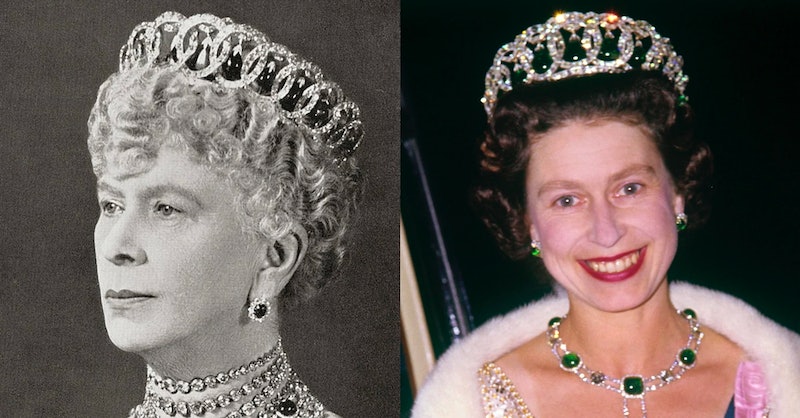 The new film adaptation of Downton Abbey centers around the Crawleys getting a visit from King George V and Queen Mary. During the visit, royal fans just might recognize a piece of jewelry onscreen. Queen Elizabeth II's Vladimir Tiara, which happens to be the 93-year-old ruler's favorite crown jewel, will make an appearance in the Downton Abbey movie.

The Vladimir Tiara originally belonged to Queen Mary, who was Queen Elizabeth's grandmother. But the way that Queen Mary became in possession of the Russian crown was something of a thriller. According to Town & Country, the Vladimir Tiara was originally commissioned as a wedding gift in 1874 when German duchess Marie of Mecklenburg-Schwerin married into the Romanov dynasty. Joseph Howard Tyson, author of Fifty-Seven Years of Russian Madness, wrote it was valued at over one million rubles, or about $15,500, at the time, and was an impressive crown jewel. The Grand Duchess was socially ambitious, and she quickly became a popular hostess in St. Petersburg and was dubbed the "grandest of the grand duchesses."

The Grand Duchess Vladimir was the aunt of the doomed Emperor Nicholas II, the last czar of Russia. According to Town & Country, she was the last Romanov to flee the Russian Revolution in 1917, and she stashed her jewels into a wall of Vladimir Palace to be later smuggled out. It took the jewels a few years to be sneaked across the border, and duchess was not able to see them before she died in France in 1920. The tiara reached the hands of the Grand Duchess Vladimir’s children by 1921, but they would not hold onto the jewels for too long.

Needing to fund their lives in exile, the children sold the Vladimir Tiara to Queen Mary for £28,000, or $35,000, according to Christopher Joll, author of Russian Relations. Queen Mary was pleased with the acquisition, but sent the crown to Garrard to repair minor damages and make the tiara more adaptable.

The loping crown had a row of pearls hanging in its circles. According to Leslie Field, author of The Queen's Jewels, Queen Mary had the tiara reworked so that she could choose to switch out the dripping pearls for her Cambridge emerald jewels if the mood struck her. Queen Elizabeth II inherited the Vladimir Tiara in 1953, and she has been seen wearing the tiara in both ways.

In Downton Abbey, Queen Mary is set to visit the Crawley's Yorkshire country house in 1927, so she would have been in possession of the Vladimir Tiara for six years at the point.

In the movie, the Vladimir Tiara isn't the real deal, but rather a painstakingly-made replica by model maker Martin Adams, according to Town & Country. The tiara in the movie has the Cambridge emerald jewels attached to it, just as how Queen Mary liked it.

"For all the royal jewels depicted in the movie, we wanted pieces that the audience might recognize from our current royals that also worked in terms of style and proportion for the costumes," Downton Abbey costume designer Anna Robbins tells Town & Country. "We were careful to choose pieces that were owned and in the possession of the characters depicted wearing them at the time."

Queen Elizabeth II has worn the Vladimir Tiara a number of times across the decades, and has donned the tiara so frequently that it appears to be one of her most favorite pieces. Seeing Queen Mary wear it in the late 1920s in Downton Abbey will be an interesting — and accurate — peek into history.

More like this
Jennifer Lopez Wore A Naked Dress To The Shotgun Wedding Premiere
By Dominique Norman
I Tried Kendall Jenner's No-Pants Look As A Plus-Size Woman
By Sarah Chiwaya
Spring 2023's Hottest Shoe Trends Include Moto Boots, UGG Minis, & More
By Allie Fasanella
12 Red-Hot Valentine's Day Outfits Perfect For The Holiday Of Love
By Dominique Norman and Kelsey Stiegman
Get Even More From Bustle — Sign Up For The Newsletter
From hair trends to relationship advice, our daily newsletter has everything you need to sound like a person who’s on TikTok, even if you aren’t.