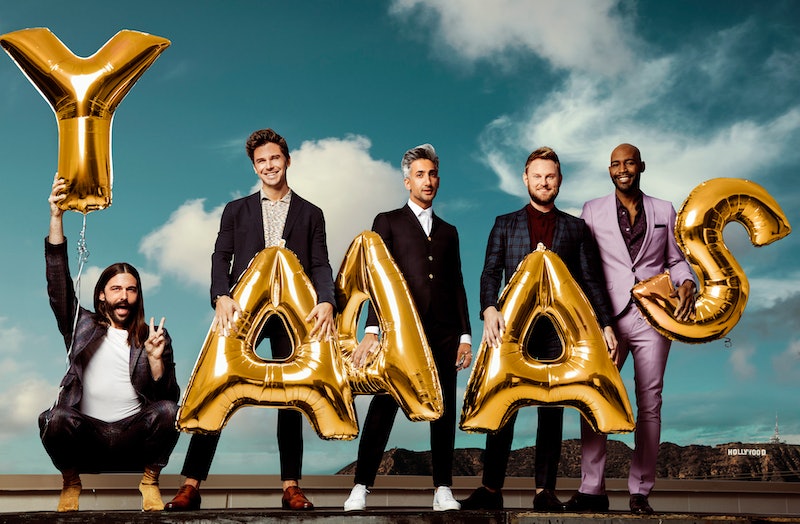 The Fab Five is headed to Kansas City, Missouri. On Friday, Netflix announced the third season of Queer Eye, and revealed that the cast would be leaving the greater Atlanta area, where they spent the the first two seasons helping to change lives. Season 3 of Queer Eye will find the Fab Five, Jonathan Van Ness, Antoni Porowski, Karamo Brown, Tan France, and Bobby Berk, traveling all the way to Kansas City, Missouri, where they will bring their talents to an entirely new pool of potential "heroes."

The show's second season just premiered in June, but according to a recent press release from Netflix, production on Season 3 of the hit series — a reboot of Bravo's Queer Eye for the Straight Guy — is due to start on July 16 and brand new episodes will premiere in 2019. On Friday, the streaming service posted a video on Twitter that teased the change of scenery. In animated the clip, which features cutouts of Jonathan, Antoni, Karamo, Tan, and Bobby, the Fab Five jump in their signature truck and leave the Peach State to drive across the country.

In the promo, which appears to use audio from previous episodes, grooming guru Van Ness exclaims, "Road trip!" and hops in the driver's seat before the show's culture expert, Brown, says, "Jesus, take the wheel." The group then argues about Van Ness's driving, with resident interior designer Berk shouting at one point, "You are not in a lane!" They arrive in Kansas City eventually though, and France, the show's style guide, reassures everyone, "We're alive, we're alive," before the car doors can be heard slamming shut.

While there's no word yet on whose door the Fab Five will knock on in Season 3, the show's second season saw the series covering new ground, featuring their first transgender and female subjects, and confronting complicated topics like religion. It seems likely that the experts will continue to strive for inclusivity in who they choose to makeover and help every episode.

In an interview with The Hollywood Reporter in June, Karamo said he hoped they'd get the opportunity to expand their reach even more, to showcase different groups of people and create more diverse representation. "For me, if we're able to get a third, fourth, fifth season, I really want to keep pushing the boundary of people we are helping because there are so many people who don't feel seen," he told the publication. "We quietly tapped on the senior citizen community, and that got such a big response. I want to dive in with people with disabilities."

In the same interview, Tan said he'd like to be able to share more of himself with viewers, adding, "It's not so much episodic stuff, for me, it's about telling people every aspect of our lives to make it all feel as normal as possible. I don't want it to be taboo to talk about anything that I want to talk about."

The Georgia setting has been a key element of the show's first two seasons, with the Southern backdrop creating unique opportunities for dialogue about important social issues issues — like the church's relationship to the LGBTQ community and race relations and police brutality. And though Kansas City is not as far south as Atlanta, it is still not a coastal city like New York or Los Angeles, so those conversations will certainly continue. That said, the change of scenery is sure to play a big part in Season 3.

The new episodes won't premiere until 2019, but if the first two seasons are any indication, you may want to start stockpiling tissues now.

More like this
‘The Ultimatum: Queer Love’ Is Officially On The Way
By Radhika Menon and Kadin Burnett
What’s New On Netflix: Ana De Armas’ 'Blonde' & A Nick Kroll Special
By Arya Roshanian
Netflix's 'Bling Empire' Season 3 Trailer Includes A 'Selling Sunset' Cameo
By Kadin Burnett and Sam Ramsden
Everything To Know About 'Bling Empire' Season 4
By Gretchen Smail
Get Even More From Bustle — Sign Up For The Newsletter