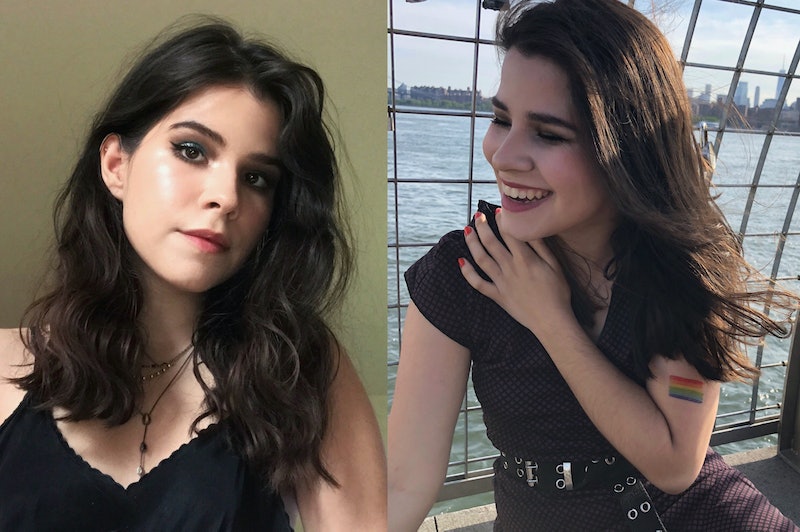 When I first realized I might like women as well as men, I was terrified — though not of the social stigma. At least in my small bubble of gay friends and classmates at my liberal college, I was privileged to feel safe. Instead, I found myself worrying about taking up undeserved space in the queer community — a community I deeply cared for, but didn’t yet feel like I belonged to. I knew I wasn’t straight, but didn’t know what I should, or could, call myself. What would my LGBTQ friends think if I assumed a label seemingly out of the blue? Would people think I was lying? I thought more about how close queer friends would receive my late-blooming news than any of my heterosexual friends or family. But as someone who had just started to explore my sexuality (and is still doing so), I couldn’t help but feel like an imposter.

I’m not the only one who has experienced this kind of queer imposter syndrome, but it’s not something I’ve seen talked about very often or something I’ve felt comfortable expressing. When Ariana Grande released her song “Monopoly” in April, plenty of people interpreted the lyrics, “I like women and men” — which implied she wasn’t straight, while avoiding any labels — as queerbaiting. Seeing this, I couldn’t help but remember my fear of being invalidated and disbelieved.

As an article about these lyrics and labeling sexuality circulated on Twitter, people wrote that Grande was exploiting queer relationships for personal gain and attention without having to experience the realities of actually being queer. Grande, who replied on Twitter that she didn’t feel a need to label herself, signaled to the fact that people should be free to interpret their sexuality however they want. While she didn’t explicitly “come out” as anything, I related to her in this moment. I had a lot of questions about myself, but I knew I liked women and men, too. But as a woman who had only dated men in the past, I felt frustrated that someone might look at me like they did Grande and say, "You don’t belong."

Invalidation, whether it’s intentional or not, is an all-too-common response for people who don't label their sexuality, who are interested in people of different genders. The people who fit in here somewhere, as I felt I did, are continuously met with disbelief — the notion that people whose sexuality is fluid are “faking” or looking for attention. Queerbaiting, or hinting at queerness without actually depicting it, is certainly real in pop culture today. And queerbaiting is problematic — it's "essentially a marketing ploy," as The Independent reported, that capitalizes on and erases the lived experiences of queer people. And it especially erases the experiences of people who may be just presenting their queerness for the first time — who may be afraid that they'll be accused of queerbaiting, too.

Hearing these kinds of statements ultimately hurts those who are just starting to figure out their sexuality. They further the biphobic idea that people can’t develop genuine interest in multiple genders, or that they don’t have the right to not label themselves.

Because I felt I was attracted to men more so than women, or at least in a different way, I told myself it wasn't valid to talk about my sexuality in the context of belonging to queer culture. Comments like those Grande and others received told me I wasn’t valid enough. This kind of identity policing brought on a sense of guilt and even a disbelief in my own feelings, especially when I first started the process of exploring my sexuality.

LGBTQ activist and educator Robyn Ochs tells Bustle that people have an “ongoing desire to write simple narratives” — that those with identities that are still evolving, or who don’t identify with labels at all, are met with anxiety because they don’t clearly fit into a neat category. Because they are not understood, they’re often pigeonholed into certain groups. Even for those who come out as bisexual, pansexual, or demisexual explicitly, Ochs says, their sexualities can be seen as impermanent. And because there’s already a lack of queer representation, celebrities who don’t fit into the mold of what queer people want are particularly critiqued. As Ochs says, “We put [celebrities] on a pedestal when they do that work, and tear them down when they don’t. We expect too much of each individual person.”

While I wrestled with these kinds of perceptions online and in the media, I also wrestled with my guilt. For queer people in America, especially trans people and those of color, physical danger and violence have always been a lived reality, one I never had to grapple with. I thought of my friends who’d been out for years, braving the bullying of classmates, the fetishization of their sexuality, the inability to take who they really wanted to high school prom. For me to now assume my queer identity in a socially conscious, welcoming atmosphere felt almost cheap. I felt like I was performing queerness, without having to experience any of the "consequences."

But as I talked everything over with my LGBTQ friends, I realized this, too, is harmful thinking. Being queer isn’t predicated on the experience of violence or discrimination. It’s internal, a fluid identity. It changes as you do. And though I saw people become territorial over the community, there were those who spread affirming messages, too —that no matter the levels of your attractions or the labels you put on it (or didn’t), you, and your sexuality, are valid.

But I wondered: At what point in my journey could I claim my queerness? When do you really feel like you fit in? Being made to believe that you’re an imposter can make these questions feel like weights, but the answer is simple: whenever you want.

“You’re the best judge of your own heart and body, how you respond and who you respond to,” Ochs says. “If people turned the energy they use for gatekeeping others’ identities towards holding space for all of us, we’d be so much better off.”

I’ve come to feel less alienated, less of an imposter, even though I still don’t really label myself. So, if you’re in a similar place, talk to others. Surround yourself with those who will affirm you. As long as you allow others to have their voice, you can start to develop your voice, too. The actual imposters will never feel imposter syndrome. So if you’re worried you don’t belong, just know that you do.