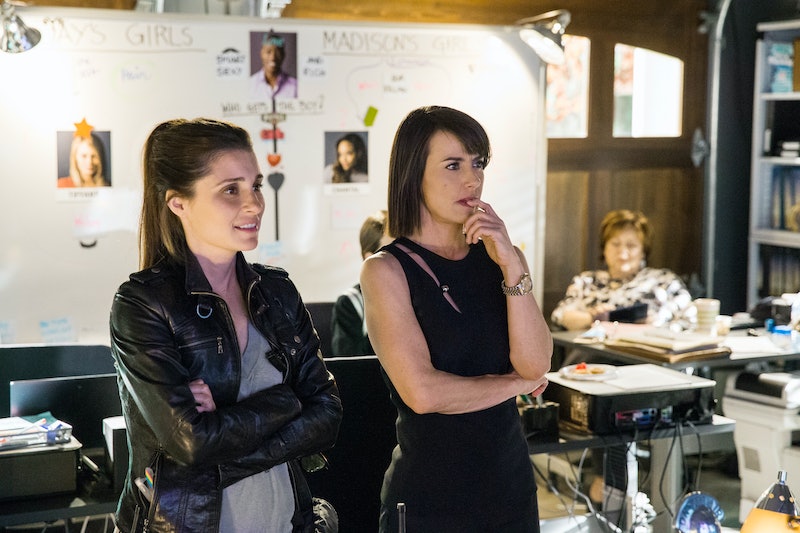 Spoilers for the Season 3 premiere of UnREAL (creator: Marti Noxon). If any character on cable television has the power of a phoenix rising from the ashes, it’s Quinn King of UnREAL. This executive producer is really, a terrible person, but she always finds a way to bounce back when it comes to her career. Heck, at the end of Season 2, two whistleblowers were killed, and Constance Zimmer's character is still in charge. Hanging by a thread, but in charge. Unfortunately, she’s going to have a handle with Serena (Caitlin FitzGerald), the first suitress of Everlasting in this new season. Serena and Quinn have so much in common on UnREAL that Quinn is going to have to change or let Serena run the show.

Quinn is used to getting what she wants when it comes to her show, so, along with Rachel, they push and play the contestants and suitor so they get what they want — good television, at any cost. But in the wake of #MeToo and post-Trump feminism and all that, Everlasting decides to have a suitress instead of a suitor — it’s The Bachelorette, but, you know, fictional. UnREAL's (executive producer: Sarah Gertrude Shapiro) Serena is smart, capable, and Silicon Valley royalty. She's referred to as the “female Elon Musk,” so those are some pretty big shoes. And Quinn’s problems with Serena begin when Serena is treated like any old Joe Schmo on the show.

The thing about Quinn is that she’s wonderful at producing other people — for better or worse, she does make really great television. She messes with people’s lives for ratings, but it usually works out for her. But Quinn’s Achilles’ heel is her lack of self-knowledge. She is a champion in her job, but she is blind to her personal life. She thought that being Chet’s mistress for 10 years was a good enough situation — that she didn’t deserve anything more. She thought that taking the executive producer spot on Everlasting instead of immediately getting a creator title was good enough. And now, Quinn’s job is to boss around someone who is just like her — thinks she’s smart and quick enough not to fall for any crap — and she doesn’t even see it.

Rachel (Shiri Appleby), though, sees it. Rachel recognizes that Serena is not going to fall for the usual brand of Everlasting tricks from the second Serena steps out of the car. Serena doesn’t like the mermaid dress they picked out for her first night, so she nixes it. Serena doesn’t like the men they’ve chosen, so she sends home a man on the first night that Rachel specifically asked her to keep. Then, she asks him back, and she has sex with him. Then, she sends him home. The writing is on the wall, and when Rachel tries to explain this to Quinn, Quinn brushes it all off.

Does Quinn recognize herself in Serena and is refusing to acknowledge it, lest she end up how she perceives their suitress — alone and desperate enough to end up on reality television? Or is she just angry that Rachel figured it out first instead? That is something that will be explored over the course of the season. In an interview with Us Weekly, Zimmer explained:

“In the beginning she’s a little off balance and it was an interesting thing to play, having played her for two seasons so in control… Then you’ve got this strong woman coming in who’s like, I know exactly what I want and I’m going to go get it. We’re saying, OK, well let’s direct you, and sometimes it works and sometimes it doesn’t. [Quinn] starts out one way and she ends up another way.”

Hmm… a strong, powerful woman that may have to change her mind? That sounds familiar… a little like Serena, perhaps? FitzGerald told the New York Post, “Serena is very accustomed to orchestrating the world according to her role and comes onto the show believing that will be possible — poor, naive woman that she is — and has to confront a lot of her own demons.”

Quinn and Serena are two peas in a pod, and neither of them sees it just yet. If Quinn especially can look around and really see what’s happening around her, they could make this the best season of Everlasting (and UnREAL) yet. And if not? Total mutual destruction, which, let’s face it — would also be great television.