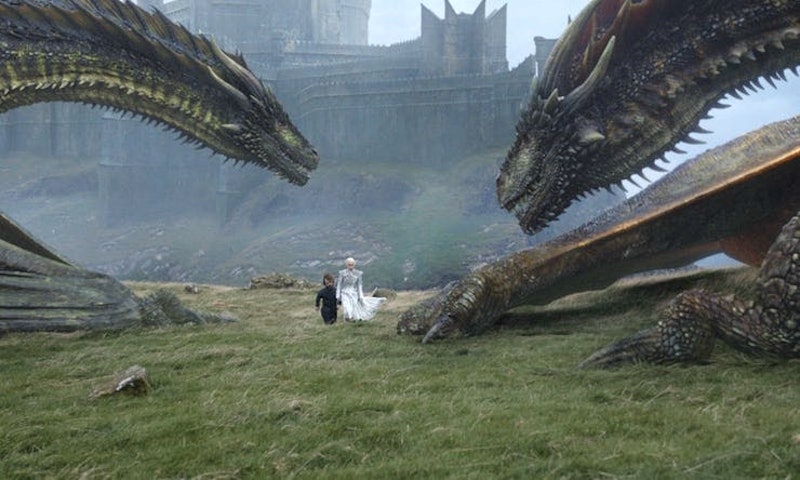 As Game Of Thrones enters the climactic two episodes of its penultimate season, there only seems to be one question on every fan's mind: Will one of Dany's dragons become an ice dragon? The theory has been gaining steam among viewers as Jon has gradually managed to shift Dany's attention from the southern war for the Iron Throne to the Great War brewing in the North against the Night King and his army of the undead. But is it possible? These quotes from the Game Of Thrones books about ice dragons indicate that there is some confusion among fans about the exact nature of these mythical beasts.

The first time the phrase "ice dragon" is mentioned in George R.R. Martin's A Song Of Ice And Fire series doesn't come until the second novel, A Clash Of Kings — and even then, it's used to refer to the name of a constellation, not an actual creature of legend.

"The way's easy. Look for the Ice Dragon, and chase the blue star in the rider's eye." She backed through a door and started up the winding steps.

This reference to the Ice Dragon constellation continues throughout the third novel, A Storm Of Swords, where the blue star guides four different characters' journeys across Westeros: Bran Stark, Jon Snow, Samwell Tarly, and Davos Seaworth. The image of several characters whose stories are all connected by the same icy blue star is an interesting counterpoint to the end of the first novel, A Game Of Thrones, in which the stories of several characters are all connected by the same fiery red comet. If, as Osha tells Bran, the red comet heralds the coming of dragons, then does the blue star also herald the coming of ice dragons?

Not until late in the third novel do readers get their first reference to a physical ice dragon, rather than the constellation that bears its name — and even then, it's used solely as a metaphor:

The ice pressed close around them, and he could feel the cold seeping into his bones, the weight of the Wall above his head. It felt like walking down the gullet of an ice dragon.

After no appearance of the phrase in the fourth novel, A Feast For Crows, ice dragons are mentioned three more times in the fifth (and so far final) novel, A Dance With Dragons. It's intriguing to note that, while the concept was formerly tied to several different characters, it's now used solely in conjunction with Jon… and he gives readers the first confirmation that the ice dragon isn't just a metaphor, but an actual figure from Westerosi legend:

They rode the winch lift back to the ground. The wind was gusting, cold as the breath of the ice dragon in the tales Old Nan had told when Jon was a boy.

Twice more in that novel, Jon compares the cold and the wind to an ice dragon… and that's the entirety of the books' references to the fearsome beasts. If that doesn't seem like much to go on, you're right; but the bulk of readers' knowledge about ice dragons doesn't actually come from A Song Of Ice And Fire itself, but rather the series' encyclopedic companion piece, A World Of Ice And Fire.

In that heavy tome, in the section on the Shivering Sea (the body of water to the east of Westeros and north of Essos), the concept of ice dragons is explored at some length:

Of all the queer and fabulous denizens of the Shivering Sea, however, the greatest are the ice dragons. These colossal beasts, many times larger than the dragons of Valyria, are said to be made of living ice, with eyes of pale blue crystal and vast translucent wings through which the moon and stars can be glimpsed as they wheel across the sky. Whereas common dragons (if any dragon can truly be said to be common) breathe flame, ice dragons supposedly breathe cold, a chill so terrible that it can freeze a man solid in half a heartbeat.

Sailors from half a hundred nations have glimpsed these great beasts over the centuries, so mayhaps there is some truth behind the tales. Archmaester Margate has suggested that many legends of the north — freezing mists, ice ships, Cannibal Bay, and the like — can be explained as distorted reports of ice-dragon activity. Though an amusing notion, and not without a certain elegance, this remains the purest conjecture. As ice dragons supposedly melt when slain, no actual proof of their existence has ever been found.

— A World Of Ice And Fire

According to that passage, the answer to the question of whether one of Dany's dragons will be turned into an ice dragon appears to be: no. The encyclopedia makes it clear that ice dragons are a completely separate species from the breed of Valyrian dragons in Dany's control. Therefore, if one of Dany's dragons were to be killed and raised from the dead by the Night King, it wouldn't suddenly transform into an "ice dragon" per se, with translucent wings and a body literally made out of ice. Rather, it would simply become a "wight-dragon" — the same dragon it was before, only now operating under the control of the Night King.

The question is… once the Night King raises one of Dany's dragons as a wight, does it still breathe fire? Or would it then start breathing ice instead?

If things go south on Jon's quest north of the Wall in Season 7's sixth episode — and Dany decides to come to his aid on dragonback — viewers may be finding out the answer to this question sooner than they'd like.

More like this
'GoT' Star Emilia Clarke Says She "Just Can't" Watch 'House Of The Dragon'
By Brad Witter
Everything To Know About The 'Daisy Jones & The Six' TV Series
By Maxine Harrison and Brad Witter
The Song At The End Of 'The Last Of Us' Ep 1 Has A Deeper Meaning
By Sophie McEvoy
A New 'And Just Like That' Table Read Pic Confirms A Key Character's Return
By Jack Irvin and Grace Wehniainen
Get Even More From Bustle — Sign Up For The Newsletter
From hair trends to relationship advice, our daily newsletter has everything you need to sound like a person who’s on TikTok, even if you aren’t.