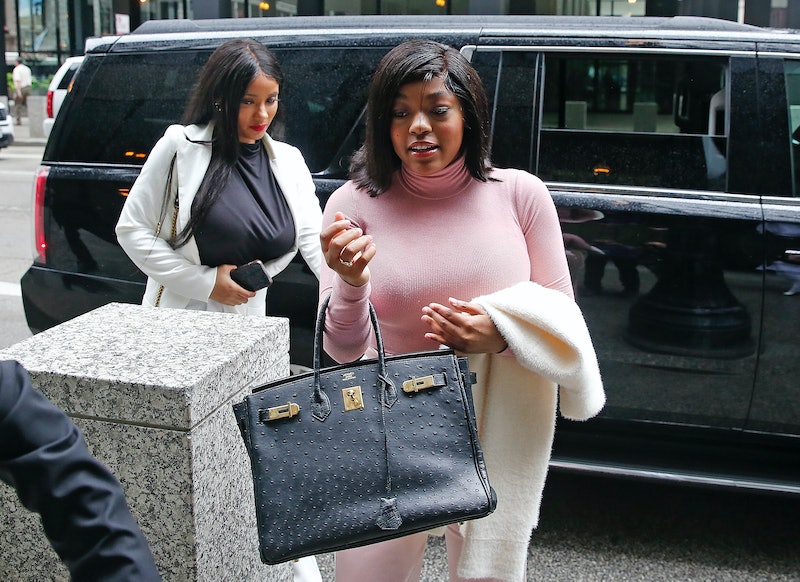 The mother of one of R. Kelly's live-in girlfriends has claimed that her daughter has come home. R. Kelly's girlfriend Azriel Clary has reportedly left the singer, according to an interview her mother Alice Clary gave to People. Clary's parents shared their daughter's story on the first part of Lifetime's documentary Surviving R. Kelly, and now, after five years with the singer, Clary, 22, is back home. Bustle has attempted to reach out to Clary via email, but did not receive an immediate response.

The 22-year-old Clary appeared to confirm on social media that she's back with her parents, reportedly sharing photos on the unverified Instagram account @azrielmostwanted. The young woman had been in the news earlier this week after the @azrielmostwanted account seemingly shared a live video on Instagram, showing a fight between her and Kelly's other live-in girlfriend, Joycelyn Savage, on Wednesday, Jan. 8. The 24-year-old Savage was arrested for the physical altercation that occurred at Kelly's home in Trump Tower in Chicago, and was released on Thursday.

Clary seemed to confirm she was home on her apparent Instagram, which shared photos of Clary looking happy with the caption, "This is my face after having White Castles with my dad!!!" She used three heart emojis and the hashtags #byechicago #ontherunwithazriel. While her social media accounts have not been confirmed, Clary also has presumably been posting on Twitter about her decision to come home. "No one ever wakes up and says 'today I'm going to be manipulated, or taken advantage of, or kidnapped'.. those are things you just cannot control," she appeared to write on Twitter. "I never thought me and victim would ever be in the same sentence because I was too in denial.. but once you realize, your [sic] realize."

As Surviving R. Kelly showed, Kelly met Clary when she was 17-years-old at a concert in Orlando, and promised to help with her music career. In the documentary, Clary's parents, Alice and Angelo, and her sister, A'lceis Clary, shared how they believed she was in a hostage-like sex cult led by Kelly. The singer has denied all allegations of sexual abuse or sex with a minor. And Kelly is currently being held in federal prison in Chicago without bail. While he is denying all charges, the AP reported he is facing 40 counts of state and federal sexual misconduct charges that include sexual assault, child pornography, and running a racketeering scheme that would find girls to have sex with him.

Kelly's attorney Steve Greenberg responded to claims made by Clary's parents, telling People, "I think people can judge these parents, their history of self-promotion, and their comments, on their own, considering the source. These folks are all about their own fame. They are not worth our time."

Meanwhile, Clary's departure has reportedly opened the door for Savage to reunite with her parents as well.