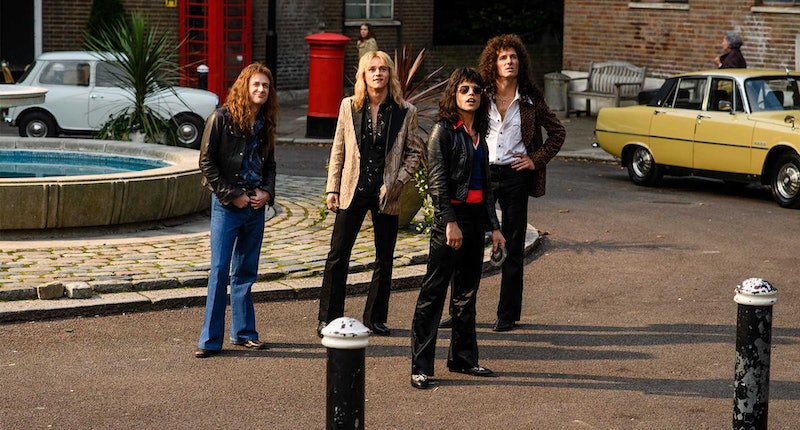 After earning his first Oscar nomination for playing Queen frontman Freddie Mercury, Rami Malek addressed the controversy surrounding Bohemian Rhapsody director Bryan Singer, telling fans that they can still enjoy the rock and roll biopic despite Singer's work on the project. In an interview with the Los Angeles Times (via People), Malek also explained that he was hired to play the legendary musician before Singer was brought on to helm the film.

"As far as I knew, I was considered before Bryan was even attached," he told the L.A. Times after Oscar nominations were announced on Tuesday morning. (Bohemian Rhapsody was also nominated for Best Picture.) "So I had my head down preparing for this for about a year ahead of time, and I never really looked up." The actor also added that he was "unaware" of the allegations of sexual misconduct against the director, saying, "I didn’t know much about Bryan. I think that the allegations and things were, believe it or not, honestly something I was not aware of, and that is what it is. Who knows what happens with that … but I think somehow we found a way to persevere through everything that was thrown our way."

Malek went on to say that the fact that Singer was eventually fired from the production — he was replaced by Dexter Fletcher with three weeks left of filming — should help fans to continue to enjoy Bohemian Rhapsody despite the controversy. "That can be something that they can look at from a perspective of understanding why they can appreciate the film," he said.

Reflecting on the troubled production, Malek added that the ups and downs that came with making Bohemian Rhapsody helped him to feel closer to Freddie Mercury. "Perhaps that was Freddie himself doing it because we wanted to make a product that was worthy of him," he said. "Who knows? I’m just proud that this cast and crew collectively raised their game and we depended on one another."

"It was a testament to everyone’s spirit and courage and skill. And one thing I will say about everyone — almost everyone — we never gave up," Malek continued.

Malek isn't unique in his desire to take the focus away from the allegations against Singer, which include allegations of sex with underage boys and rape (all of which the director has denied). After winning the Golden Globe for Best Picture Drama, producer Graham King refused to answer questions about Singer. "That's not something we should talk about tonight," King told reporters backstage, according to Entertainment Weekly. "Every single person collaborated and did [the film] out of passion [for] making this story. That was everybody."

The day after Malek's interview, The Atlantic published an article that featured interviews with Singer's alleged victims, detailing both old and new allegations of sexual assault and misconduct against him. Singer responded to the new article in a statement obtained by Bustle:

"The last time I posted about this subject, Esquire magazine was preparing to publish an article written by a homophobic journalist who has a bizarre obsession with me dating back to 1997. After careful fact-checking and, in consideration of the lack of credible sources, Esquire chose not to publish this piece of vendetta journalism. That didn’t stop this writer from selling it to The Atlantic. It’s sad that The Atlantic would stoop to this low standard of journalistic integrity. Again, I am forced to reiterate that this story rehashes claims from bogus lawsuits filed by a disreputable cast of individuals willing to lie for money or attention. And it is no surprise that, with Bohemian Rhapsody being an award-winning hit, this homophobic smear piece has been conveniently timed to take advantage of its success."

As allegations continue to surface, one thing is clear: all the filmmakers behind Bohemian Rhapsody will likely have to address the controversy surrounding the film's director.