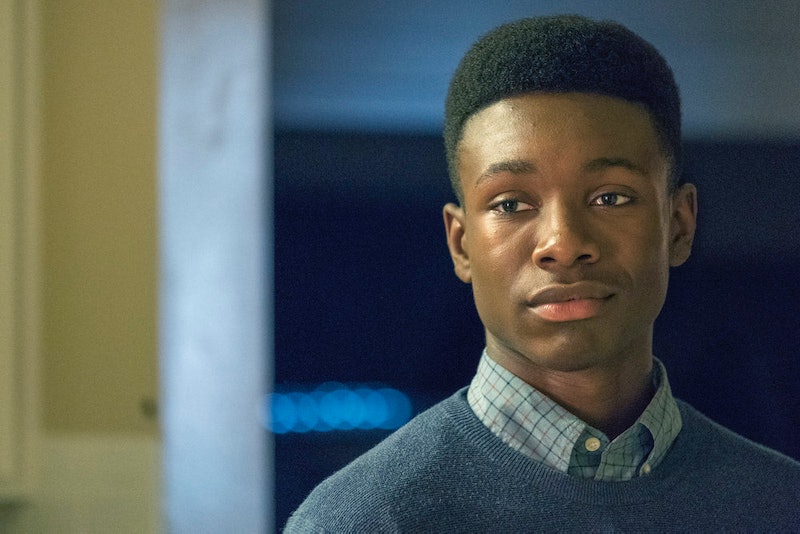 Season 2 of This Is Us finally revealed just how Jack Pearson died, but it did little to fill in the gaps between his untimely death and the present-day Pearson clan. Season 3 is making it happen — in a series of flashbacks, viewers learned just how much the family struggled after losing their patriarch. Perhaps most poignantly, Randall’s flashbacks on This Is Us demonstrated just how underappreciated he is in the Pearson family and how much he gave up just to keep it all together.

Rebecca and her three kids are no longer in the Pearson house, since, you know, it burnt down, and she’s trying her best to find some place else for them to live. It’s not going well, though, because she can barely get out of bed. Everyone is coping with this sudden shift in their lives in their own way — Rebecca is in a walking coma; Kate is overeating; Kevin is drinking and dreaming of the football glory he’ll never have; and Randall is leaning hard into attending Howard University and tapping into African-American culture that he doesn't get to on a daily basis with a black family in the neighborhood.

Randall very much sees himself as a Pearson, but he also is highly aware of his otherness within his clan. Still, he gets into Howard just as things are sliding for the family, and he tells Rebecca so — she needs to get it together for the sake of her kids, because Randall can’t hold them all up. Touché, teen Randall.

This otherness is something that Randall continues to struggle with, as he’s in the present day at his new apartment building and trying to fix everything he sees wrong with its nearby community center, where his father used to attend NA meetings. An old friend of his father's essentially tells him that despite his desire to "save" their building, he's still not going to be welcomed as an insider as he rushes from North Philly to the more affluent New Jersey suburbs when he's done replacing the lightbulbs. When he tells a councilman he's trying to enlist help from, he says that he has two dads to make proud of him, he means it, because he’s literally been straddling two worlds for his whole.

Later, when Kevin and Kate have an off-handed fight about them being the only two people to be able to "carry on a piece" of Jack, Randall is instantly wounded, and it’s then that we realize how much Randall gave up in order to keep his family together — he gave up the future he wanted for himself so that he could be close to the Pearsons as they mourned. Even though he's still mourning, too, of course.

All of the Pearsons have baggage left over from Jack’s death — it’s just that Randall’s is the hardest to spot. Kevin is a wounded actor and addict. Kate has her own mental health struggles when it comes to food and weight. Rebecca lost the love of her life. And Randall just keeps going, but not really. His face when the lights went down at Kevin’s premiere said it all — he has done so much to keep everyone above water, and they barely consider him a true member of the family. Randall’s not a “true” member anywhere he goes, and this could be where he got his perfectionist traits. If you are exceptional, it is hard to ignore you.

This Is Us has explored Randall’s emotional responses through the lenses of William and being an adopted son, but this is the first time the show has let him fall apart in regards to Jack. Randall may not be Jack’s biological son, but he did not feel his loss any less acutely than his siblings. As we waffle between teenage Randall and Randall in the present day, This Is Us may soon present a man that’s not caught between two worlds and families — he may decide just to exist in one.

More like this
'Bridgerton' S3 Teases Exciting Social Season For Penelope Featherington
By Bustle
'The White Lotus' Costume Designer Explains That Accidental 'Princess Diaries' Moment
By Grace Wehniainen
How Is The British Royal Family Related To The Romanovs?
By Karen Fratti
Netflix Bumped Up The 'You' Season 4 Premiere Date — Here's What To Expect
By Bustle Editors
Get Even More From Bustle — Sign Up For The Newsletter