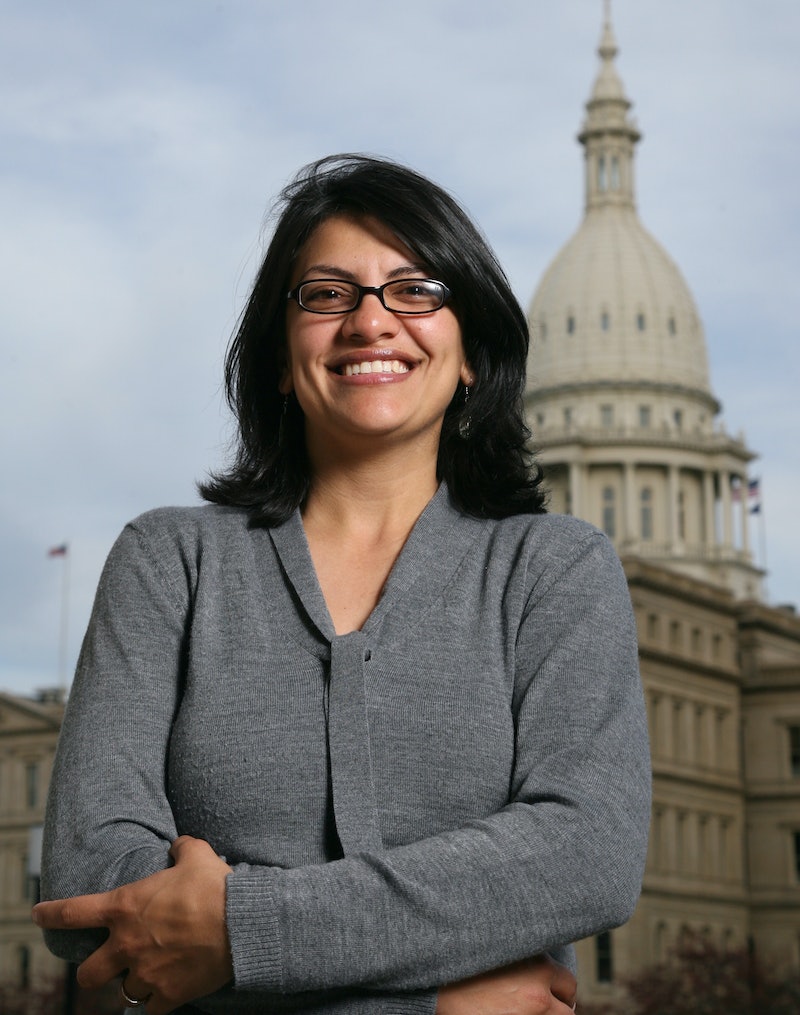 While this fall she's set to become one of the first Muslim women elected to Congress, Rashida Tlaib wants America to see past that label. Don't get her wrong — she's proud her win could offer a "moment of lightness" during what she sees as an "extremely painful and dark" time in America. But she's ready to look ahead to the change she hopes to bring to Washington.

"I love that I’m Muslim, and I love that it’s such a powerful message," Tlaib tells Bustle in a phone interview. "But I hope people remember why I’m really doing this, and why it’s about economic and social justice."

The attorney's Democratic primary win earlier this month basically guaranteed her place on Capitol Hill, as she'll run uncontested in the general election to fill longtime former Rep. John Conyers' seat representing Michigan's 13th Congressional District. Tlaib is one of a record-breaking 90 Muslim-Americans running for office at every levels this election cycle, and she'll likely be joined in Congress by Minnesota's Ilhan Omar, forming the first class of Muslim congresswomen. While she's excited to be part of this surge in candidate diversity, she'd rather talk about what she can do to improve the lives of average Americans in her district.

"I want [the] Justice For All Civil Rights Act to get us back to the core intent of what the ‘64 act was supposed to be about. So I’m going to change it to say: 'If you can show that the impact of the policy itself is discriminatory on the ground as it’s implemented, then that is enough to show that you violated someone’s civil rights."

It's clear Tlaib, who is also a democratic socialist, is passionate about social justice when she talks about her aspirations. But she doesn't plan to storm Washington with all-or-nothing demands. While she shares other progressive candidates' dreams of restructuring the health care system and abolishing U.S. Immigration and Customs Enforcement, she sees herself taking a more incremental approach to ensure Americans aren't left behind.

"Yes, I want to support Medicare For All. Yes, I want to support the minimum wage increase," she tells Bustle. "But I don’t want [my constituents] to have to wait for that to pass to get a good job, to get quality health care. I want to be able to increase that access and try to get it for them now while we fight in Congress."

As a Palestinian-American, the current battle for immigration is close to Tlaib's heart as well. "Look at me, I’m a daughter of two people who came from a war-stricken country," she says. While she wants Republicans in Congress to stop putting bandages over gaping wounds, she also believes some relatively small policy changes would make a huge impact on immigrants' lives. In that vein, she wants to pass legislation that would allow legal residents to renew their visas without having to return to their home countries.

Besides feeling embarrassed as a kid when her mother would speak in Arabic around her friends, Tlaib says she was never made to feel less-than for growing up as a Muslim girl in Detroit — and she still doesn't want her religion to define her.

"I will stand up to corporate greed and I’ll never back down," she says. "That is who I’m known as in my district and the work that I’ve been doing, and it just so happens I’m Muslim."