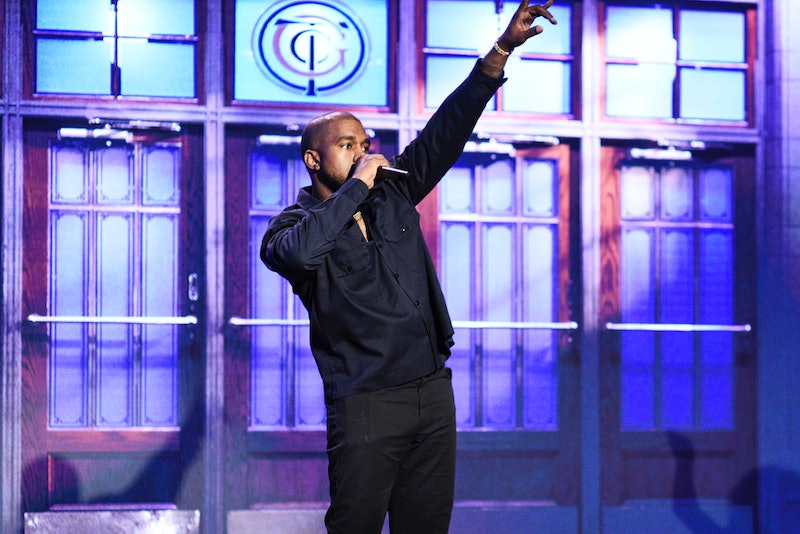 Fool me once, shame on you. Fool me twice, shame on me. But fool me thrice? Well, you're probably a Kanye West fan. After promising a release date for his latest album on social media, West did not release Yandhi on Sept. 29. As of the morning after his performance on the premiere of Saturday Night Live, West had still not dropped his ninth solo album. Fans on Twitter were going through the various stages of grief after realizing that the notoriously controversial rapper had played them. But while many people were upset, the funniest reactions to West not dropping his new album show that people have a sense of humor about it. After all, if you're a fan, you gotta roll with the painfully expected unexpected actions of West.

West announced through social media on Sept. 17 that his new album, Yandhi, would drop on Sept. 29. This information coincided with the news that he'd be the first musical guest of Saturday Night Live Season 44 alongside host Adam Driver. (Lorne Michaels revealed that West served as a replacement after Ariana Grande dropped out.) West specified in a later tweet that his album would be out "Saturday night," so fans were anxiously waiting for it to come out sometime before his SNL performances aired. However, no Yandhi was to be heard — even after he announced that he'd be going by the name "Ye" now, performed as a bottle of water, and gave an unaired pro-Donald Trump speech on SNL.

While fans were reeling on social media, West highlighted how little he's concerned about his missed release date by tweeting a meme of himself and wife Kim Kardashian the morning of Sept. 30. Yet, this is also far from the first time that West has misled the world. (Remember when he claimed The Life Of Pablo would be a Tidal exclusive?) So, as Twitter reactions show, many fans have chosen to roll with the punches and make the most of #Yandhigate (not to be confused with the actual Gandhi Gate.)