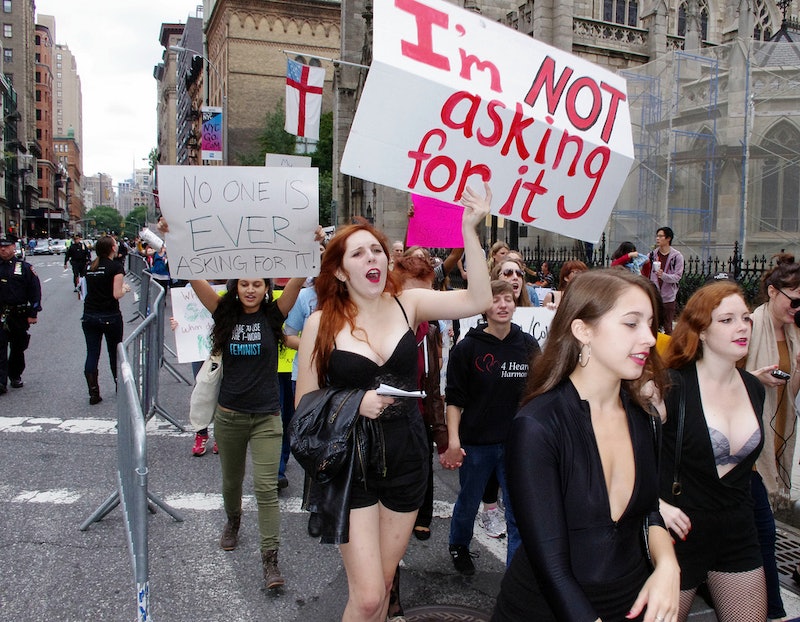 In an ideal world, discovering your sexuality is a fun, exciting, liberating experience. But in a patriarchal world, it's all too often an objectifying, dehumanizing, and disempowering one. Desireé Dallagiacomo and Kaycee Filson's "Real Sex Tips" poem describes what it feels like for your body to be seen as a vehicle for someone else's pleasure — and then to reclaim is as a vehicle for your own.

Originally performed at the 2014 National Poetry Slam and posted on YouTube channel Button Poetry, the slam poem starts off with a critique of sex tips in women's magazines that tell women all about how to please men, but little about how to please themselves. "Stick his penis through the hole of a doughnut, nibble around it, periodically stopping to suck," one of the performers quotes. Together, they note, "As a woman, everything says I am defined by what is put inside of me." And their descriptions of their personal experiences that result from this gap in our cultural discussions of sexual pleasure show how important talking about these subjects honestly and frankly is.

Both women describe their first sexual encounters, which involved a lot of men who only thought about themselves. "I knew nothing of feeling. When I had sex for the first time, fifth time, fifteenth time, I was a ghost. From the outside I saw men slip themselves in. I watched them come and never felt them leave," the poem goes.

The phenomenon they're describing is all too common among young people. The majority of men but a minority of women in college received oral sex during their last hookup, a 2016 study in the Canadian Journal of Human Sexuality found. And according to another study in the Journal of Sex Research, people ages 16 to 18 consider oral sex a bigger deal when it's performed on a woman. Reflecting these attitudes, straight women only orgasm with a partner 61.6 percent of the time, while straight men do 85.5 percent of the time, according to a study in the Journal of Sexual Medicine. In short, Dallagiacomo and Filson aren't imagining it: Women's needs get ignored as much in bed as they do elsewhere.

But thankfully, the poets didn't continue to accept this status quo. Over time, they learned to acknowledge their own sexual needs and ask for them to be met. One of them describes the first time she felt "like I was not territory to claim."

"I’m silencing the throats that call me object," they proclaim. "Cavern. Feast to feed the loudest catcall. I am learning to consider myself first. To say 'no.' And say 'yes.' To offer my partner instructions. A little slower. No, faster. No, slower. To say 'clitoris' and not flinch."

That's what everyone deserves, but not all women learn that. According to a survey by Summer's Eve, 70 percent of women can't even accurately label different parts of the vagina. We partially have our inadequate sex education system to blame for this, as well as a societal taboo around sexuality in general and women's sexuality in particular.

Lastly, the performers point out, the objectification of women and neglect of women's sexual pleasure ties into an even bigger problem: rape culture. One in three women have been touched without their consent by their senior year of college, according to the Association of American Universities' Campus Climate Survey. This happens largely because people fail to receive the message that, as Dallagiacomo and Filson put it, "My vagina was not designed to please anyone without my say so. If you are sexualizing me right now simply because I am talking about sex, it does not mean I owe you anything. I am not asking for it unless I actually ask for it."

Watch the full video and its empowering conclusion above.