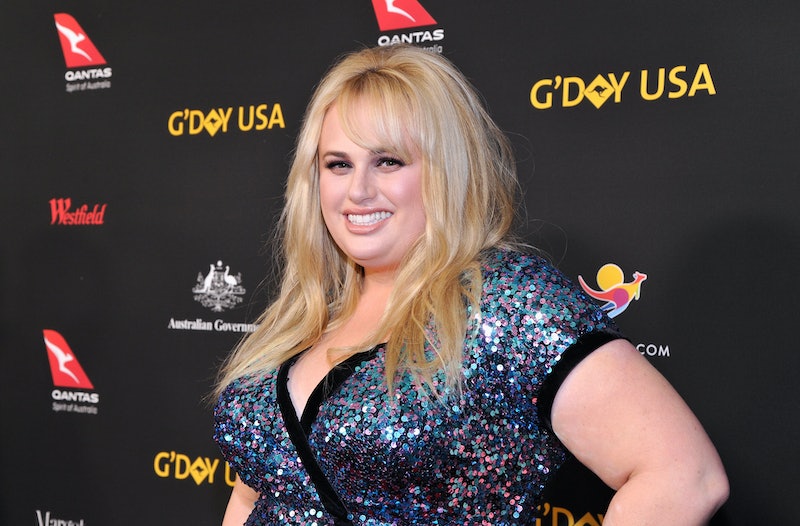 Rebel Wilson has been known for doing and saying things that make headlines. But over the weekend, the actor found herself in the middle of a press storm after she blocked critics on Twitter who took issue with her assessment on plus size romantic leads on The Ellen Degeneres Show — particularly, she blocked Black critics. While promoting her new movie, Isn't It Romantic, on Oct. 31, the actor stated that she was proud to be "the first ever plus-size girl to be the star of a romantic comedy." That's certainly something to be proud of — if it were true.

UPDATE: Rebel Wilson responded to the criticisms of her original comments and her Twitter blocking on Monday evening, Nov. 5. She wrote in a series of tweets:

"In a couple of well-intentioned moments, hoping to lift my fellow plus sized women up, I neglected to show the proper respect to those who climbed this mountain before me like Mo'Nique, Queen Latifah, Melissa McCarthy, Ricki Lake and likely many others. With the help of some very compassionate and well-thought out responses from others on social media, I now realize what I said was not only wrong but also incredibly hurtful. To be part of a problem I was hoping I was helping makes it that much more embarrassing & hard to acknowledge. I blocked people on Twitter because I was hurting from the criticism, but those are the people I actually need to hear from more, not less. Again, I am deeply sorry."

Wilson also appeared to have unblocked some of the writers and women she had previously blocked, such as ReBecca Theodore-Vachon.

EARLIER: Right after the comment aired, many people were quick to call her out, noting that Queen Latifah and Mo’nique have had the lead role in rom-coms for years before, among others. As writer Valerie Complex stated in an article for Affinity Magazine, Latifah has starred in many romantic comedies, including Last Holiday (2006), and Mo'nique also starred in the rom-com Phat Girlz (2006). And she wasn't the only one to point out Latifah and Mo'nique as pioneers for plus size women on screen. Comedian, author, and social media personality Franchesca "Chescaleigh" Ramsey responded to Wilson's initial explanation with, "huh? Queen....has been plus size....her entire....career. Monique...has been plus size...her. entire. career." Film and TV critic ReBecca Theodore-Vachon also pointed to Queen Latifah as someone overlooked by Wilson, tweeting, "*squints in Queen Latifah*."

In fact, both Queen Latifah and Mo'nique have played characters whose weight is a focus throughout their careers. Back in 1991 on Queen Latifah's appearance on The Fresh Prince of Bel-Air as Will's blind date Dee Dee, the main focus of the episode was her weight, and how despite liking her a lot, Will felt like he couldn't (or shouldn't) ask her to the school dance. And Phat Girlz is explicitly about being plus-sized in a size 0 world (aka the fashion industry).

Wilson did address her mistake on Twitter, though she didn't exactly apologize or walk it back. Responding to @Halfapintdoll's tweet specifically noting that Mo'nique and Latifah had played rom-com leads before, Wilson wrote that, while she was aware of those previous films, she hadn't been sure if they were "technically" plus-sized and "sole leads," mentioning a "grey area."

Her tweet doubling down on her assessment about plus size romantic leads went viral, with many critics responding. It even caught the attention of Mo'nique herself, who responded, writing, "Hey my sweet sister. Let’s please not allow this business to erase our talent with giving grey areas and technicalities." The actor and comedian went on, cautioning Wilson against ignoring the Hollywood films that came before: "Take a moment and know the history. DON’T BE A PART OF ERASING IT. I wish you the best."

And while Wilson took the time to respond to Mo'nique, she wasn't so willing to engage with other critics. Wilson's comments were made on Oct. 31. and her response on Twitter was sent Nov. 1. By Nov. 2, many writers and Twitter users, specifically Black women and other non-Black women of color, started sharing that they were getting blocked by Wilson, Complex and Ramsey included. The woman she gave her initial response to, however, was white, and many white critics have tweeted saying that they remained unblocked. That fact has not escaped the notice of Wilson's critics, like Kayla Sutton, a writer and social marketing curator. Sutton took to Twitter to point out this discrepancy to Wilson directly, only to get blocked herself.

In an e-mailed statement to Bustle, Sutton explains why she felt the need to speak up:

"Rebel's comments initially bothered me because they were not true. And I saw that more than plenty were quick to let her [know] that this was not the case... However what prompted me to step in was the fact that many black women and non-black POC were getting blocked for responding to her, while white women were getting very kind responses. I checked in to see what the replies said of those blocked, they were very polite and cordial. I thought by pointing out that the way she was handling this was a problem. And I found myself blocked."

Film and pop culture critic Clarkisha Kent, @IWriteAllDay_ on Twitter, was also blocked by Wilson after tweeting about Latifah's rom-com Just Wright and noting, "It's okay to admit you misspoke."

In a statement sent to Bustle via Twitter, Kent writes:

"I’d like to make it known that every Black woman (and others) who was blocked, including myself, was very gracious (even though we didn’t need to be) and took the time to educate her on why she was incorrect and wrong in her erasure of plus-sized icons Queen Latifah and Mo’Nique—though we didn’t need to. Our efforts were met with blocks and subsequent erasure as other White women parroted our words and were met with actual meaningful dialogue. As well as gaslighting—as Wilson attempted falsely portray herself as someone who supports all fat women (she does not - seeing as she has most of us blocked now) when called out by Mo’Nique on Twitter."

"I want everyone to remember this when they try to strong arm any marginalized group into 'educating' someone of privilege. Most of the time they don’t want that education, period. And 'civility' or a nice tone will not change that."

It's almost baffling to see these women got blocked by Wilson when you go back and see what they wrote in response to her comments, because the majority were, as Kent said, gracious and respectful. For example, Lawyer and writer Aditi Juneja tweeted at Wilson, and offered to chat about the situation and why it's "important to apologize." She was blocked.

Author Jenee Darden, @cocoafly, also encouraged Wilson to admit her mistake, tweeting, "Not acknowledging you were misinformed is disrespectful to the actresses who not only came before you, but opened the door for you to have this opportunity."

"I told her not stating a correction about being the first was disrespectful to actresses who came before her like Mo’Nique and Ricki Lake. Then when I saw she was mainly blocking Black women and women of color, but not white women who shared similar responses, I realized our message wasn’t her issue. She had a problem with the [messengers] — women of color. She claims to be about body positivity, but blocking Black women shows she doesn’t care about Black women, our voices and our bodies. She can block every Black woman from here to the deepest parts of Wakanda. She’s still not the first plus-size actress to star in a romantic comedy."

While there is no exact count of how many users Wilson has blocked on Twitter, some have attempted to keep track. Kent, for example, began a thread of people who've been hit with the "block" button by Wilson. So far, her thread has over 30 users mentioned in it.

One of the first of those mentioned in Kent's thread is Nabela Noor, a beauty guru and social media personality. She posted a video giving her thoughts on Wilson's comments, and how it erased the groundwork that other women have paved for Wilson. She was blocked after she posted the video.

Wilson herself has not addressed accusations that she has specifically blocked Black Twitter users and people of color. (Bustle reached out to Wilson about her actions but has not received a response at time of publication). And without a statement from the actor, the message of her Twitter blocks stands for itself. As Sutton puts it, everyone makes mistakes sometimes, but this was not the way to handle it. "There are many actors that have asked what they can do better when it comes to statements like these (Brie Larson, Jessica Chastain). Why not approach the situation with this attitude?" she writes to Bustle. Sutton adds that Wilson's actions might end up hurting the very film she's hoping will break new ground for plus size women:

"I hope that she realizes how detrimental this is to not only her career but the career of others in the film. The cast and crew that put in countless hours will suffer from her comments and the way she chose to handle it."

When erasing Black women, or any minority group, it's best to take the lead from the group that was erased and listen to what they have to say. Wilson might be blocking people now, but in the long run, her career might be the one that gets muted.