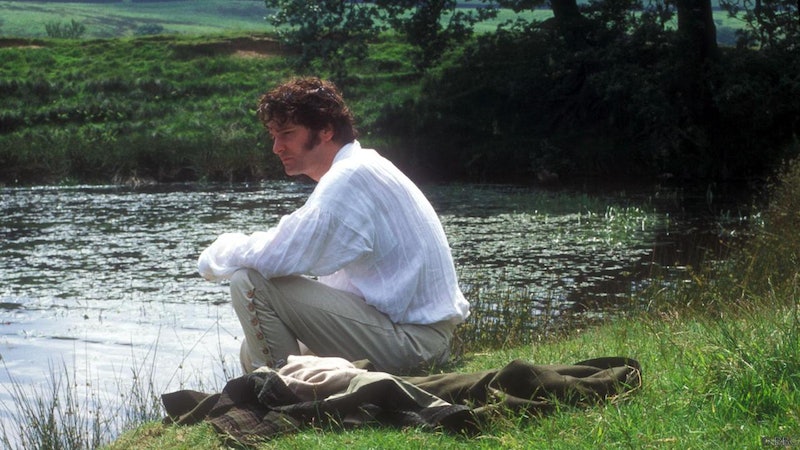 It might seem ironic seeing as Jane Austen is the new face of the 10-pound note, but unfortunately Jane Austen's old library is facing closure because they don't have enough 10-pound notes — or any other kind of banknote, for that matter. The "Great House," also known as Chawton House Library, used to be Jane Austen's brother's house, and Jane herself spent many hours sitting in the library, writing the books that we now know and love so well. Chawton House Library has long been a favorite destination for Austenites to visit on their trips to England, but it is now suffering from a lack of funds, and faces an uncertain future.

Jane Austen fans across the world are now being called to help raise funds to restore Chawton House Library to its former glory — and once you hear what's involved, I guarantee you'll want to take part. Chawton House have launched a social media campaign called The Darcy Look, which encourages people to raise money by drenching a man wearing a white shirt in water — and capturing it all on camera. Think Colin Firth as Mr Darcy coming out of the lake in that white shirt. The director of fundraising, Jane Lillystone, says she likes to think Jane Austen herself would have enjoyed the challenge. "She often had a very different opinion about things, and liked to tease," explained Lillystone, "so I hope she would."

The Jane Austen Society of North America has already raised $17,200 (£13,200) for the campaign through an event held in Dallas, Texas, but the Chawton House Library are hoping for a total of £150,000. This money will go towards creating "a cultural, literary destination within the wider grounds of the Great House, offering larger and more extensive visitor facilities and providing an enhanced experience of the Chawton estate that was Jane Austen’s home throughout the final, productive years of her life.”

Not only will this be a great honor to Jane Austen's legacy, but it will also bring joy to a whole new generation of potential Austen fans — and isn't that a wish we can all share? Keep an eye out for other events near you designed to raise money for the Chawton House Library, and let's keep the "Great House" alive in Jane Austen's memory.