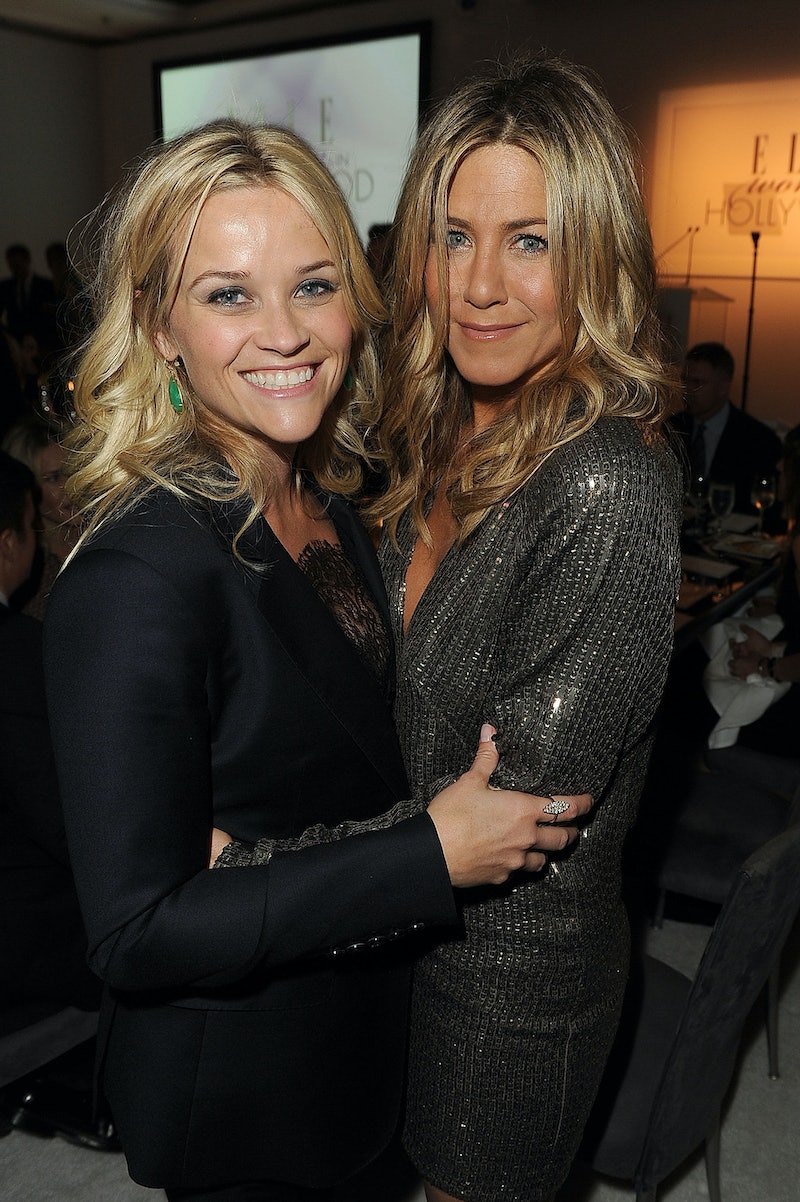 The Morning Show is making waves as one of Apple TV+'s first scripted series to premiere, but it's the reunion of stars Reese Witherspoon and Jennifer Aniston that truly has viewers excited. The actors starred as sisters on Aniston's iconic sitcom Friends in 2000, making their new show a total full-circle moment. Speaking about their new show, Reese Witherspoon recalled meeting Jennifer Aniston on Friends, where their relationship started to blossom.

In her new cover story with Harper's Bazaar, published on Monday, Oct. 7, Witherspoon told friend and interviewer Natalie Portman that she first met Aniston on the set of Friends, where she did a guest stint as Jill Green, the younger sister of Aniston's iconic character Rachel. As a huge fan of the show, Witherspoon jumped at the chance to play the character — even though she had just given birth to her first daughter Ava Phillippe, something that even Aniston seemed surprised about.

“I was 23 years old and had just had a baby,” Witherspoon explained in the new interview. “I was nursing Ava on set, and Jen just kept going, ‘You have a baby?’ I was like, ‘I know, it’s weird.' And I remember her being like, 'Where are you going?” And I was like, 'I’m pumping!'"

Witherspoon made her debut on the show in February 2000, during Season 6 episode "The One With Rachel's Sister." And although her character Jill was only featured in two episodes, she definitely made an impact. Yet, the actor confessed to Harper's Bazaar that she was "nervous" to be on set with the stars. But true to her character, Aniston treated her onscreen sister with nothing but kindness, and Witherspoon couldn't help but gush about her to Portman. "She was so sweet to me," she said. "I was really nervous, and she was like, 'Oh, my gosh—don’t worry about it!'"

Witherspoon also took notes of Aniston's performance skills and her penchant for rolling with the punches on set. "I marveled at her ability to perform in front of a live audience like that with no nerves," she remarked. "They would change all the lines and she was just so effortlessly affable, bubbly, and sunny. We’ve been friends ever since."

The twosome will reunite onscreen once again on The Morning Show, which marks Aniston's first return to television since Friends, and costar Steve Carell's TV comeback after starring in The Office. Aniston portrays an established morning show host who just lost her beloved co-host (Carell) due to a #MeToo-related scandal. Witherspoon plays her new, younger co-host, who may just be on her way to replacing her as well.

Although their characters are competing on the show, Witherspoon made it clear in the interview that their rivalry is based on important generational differences rather than cattiness. "Jen’s character existed in a world that was dominated by men," she explained. "Just the fact that she existed was all that mattered. My character is like, 'Hold on, no, no, no. If you’re not bringing other women with you, what are you doing?' It’s not antagonistic or competitive. It’s second-wave feminism meets fourth-wave feminism."

Fans who want to see the dynamic duo again (without rewatching those Friends episodes for the hundredth time) can catch The Morning Show when it starts streaming on Apple TV+ on November 1.

More like this
The Banned 'Friends' Ad Shows Monica As You’ve Never Seen Her Before
By Sam Ramsden
Reese Witherspoon Confirms This Fan Favorite Will Return For 'Legally Blonde 3'
By Jake Viswanath
'Friends' Star Maggie Wheeler Offers Support To Matthew Perry After Reading His Memoir
By Alyssa Lapid
Mel B Thinks These Celebs Should Play Them In A Spice Girls Movie
By Alyssa Lapid
Get Even More From Bustle — Sign Up For The Newsletter
From hair trends to relationship advice, our daily newsletter has everything you need to sound like a person who’s on TikTok, even if you aren’t.