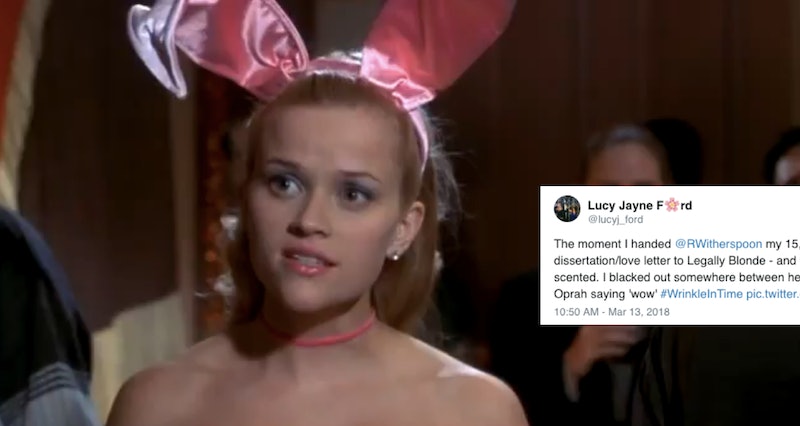 It's no secret that Reese Witherspoon's Legally Blonde is a classic. Not only is it a galvanizing film for budding feminists, but the project's magical touch also motivated Witherspoon to make more feminist-centered projects. And on top of that, Witherspoon's Legally Blonde also inspired a writer's college dissertation, according to People. That's right — the iconic Elle Woods was the subject for someone's 15,000-word paper, and even better, she surprised the actor with a copy while on the A Wrinkle In Time promotional tour.

There are too many feminist moments within Legally Blonde to name, and the gems, lessons, and uplifting notes from the 2001 hit have led many women, and even men, alike to go after their wildest dreams. For London reporter Lucy Jayne Ford, that meant turning the messages from Witherspoon's film into a full-fledged, degree-earning dissertation. During one of the press stops for Ava DuVernay's Disney directorial debut, Ford had a bit of a full-circle moment when interviewing the Wrinkle star four years after completing the paper. And according to her March 13 tweet, she was able to surprise the actor with a copy.

Thank goodness for the video, because Ford noted that while handing the copy off to Witherspoon, she "blacked out" for a bit of the conversation. But seriously, who can blame her if she weren't able to recount every single detail about this awesomeness to outsiders? Having powerhouses like Mindy Kaling, Oprah Winfrey, and Witherspoon in one room has got to be overwhelming — even for the most seasoned reporter — and for Ford, this moment was no exception.

Just before diving into the interview, Ford made sure to let all of the famed actors know how much she admired them. And once the greetings were out of the way, Ford handed off a copy of her now-viral dissertation (also affectionately referred to as her "love letter"), directly to Witherspoon.

"You can read it, you can burn it, you can clean your windows with it," Ford noted in the clip. "But I feel like this was full circle for me that I wrote that four years ago."

As you may have guessed, the actor was completely blown away by the gift. Witherspoon rocked a look of total surprise for most of the clip, but the love was seemingly felt by every fan who's ever had a connection to the film. And their Twitter reactions to all of this were priceless.

Oh, and of course, Ford wasn't the only fan to write about her love for Legally Blonde in a scholarly setting. There are others who couldn't help but share their admiration for the film in their studies as well.

The actor has spoken about fans admitting Elle Woods was their inspiration to pursue law degrees, so it goes without saying that she's fully aware of the positive impact her 2001 role has had on many. But, that doesn't mean that each time she comes across a fan with a story like this one, she's less taken aback. It has to be such an amazing feeling knowing that your project helped change lives. And thanks to Ford's video, fans can rewatch Witherspoon's joyous reaction as many times as they wish.

As if seeing Witherspoon beaming from ear to ear when holding the 15,000-word dissertation in her hand weren't enough, her parting words, or question, rather, to Ford was absolutely the icing on the cake. Just as Ford was wrapping up the already iconic interview, the actor said, "I just have one question for you: Is it scented?"

And that single moment gave Legally Blonde fans across the world permission to fangirl as much as they wished about the legendary romantic comedy, without any shame.