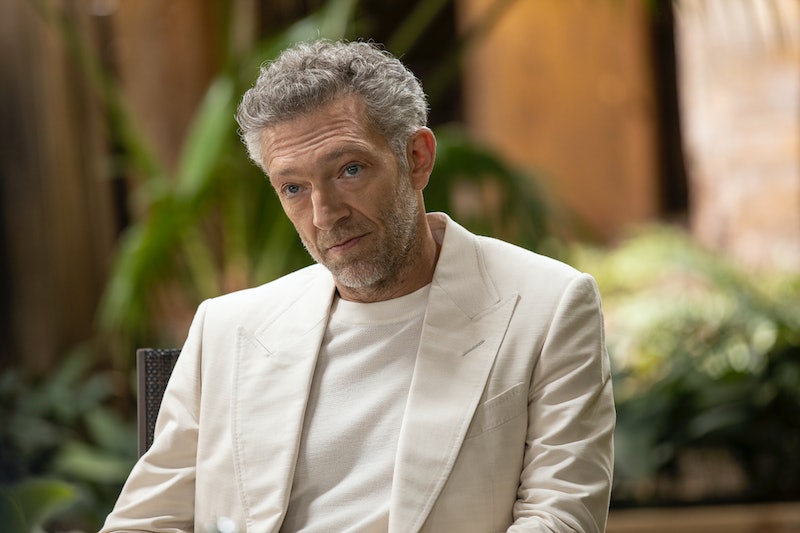 Spoilers ahead for Westworld Season 3, Episode 2. Though Dolores is on the hunt for the mysterious Serac, Rehoboam's creator, on Westworld, it's Maeve who meets him in "The Winter Line." After Maeve figures out she's trapped in a simulation, she manages to rescue her own control unit by hacking a nearby robot. She doesn't get far, but her ingenuity wins her a face-to-face with Serac, Incite's CEO and Season 3's big bad.

Played by Vincent Cassel, Serac lives in a fancy, secluded villa in an unknown location. We know from Liam that Serac is Rehoboam's original architect, and that he's currently the only person with total control over it. Serac explains to Maeve that for most of history, humanity lived in terrible chaos, but he helped change that with Rehoboam. "For the first time, history had an author," he says. "Something I helped build. A system." He says that Rehoboam was working smoothly up until recently, when Dolores' actions disrupted its algorithms.

It's not clear what Rehoboam communicated to Serac, but it's possible the sphere calculated that humanity's chances at survival were suddenly slim thanks to Dolores. "We are in the middle of a war," Serac tells Maeve. "No one knows it's happened yet, or that it's already been lost."

Serac reveals that if things continue on the path Dolores laid out, then there is "no future, at least not for my kind." He then asks Maeve to track down Dolores and kill her. When Maeve refuses and attempts to kill him, Serac reveals his trump card: a button that freezes Maeve in her tracks.

It's a brief interaction, and we still know very little about Serac, but his introduction does clarify how embedded Incite's technology is in everyday life. In "Parce Domine," Dolores asked Liam if "Incite controlled all of it" when they were flying over the Bay Area — a question that seemed rhetorical then, but is proven to be literal in "The Winter Line." Rehoboam is like the machine in The Matrix that keeps the humans comfortably in their simulation goo. Incite has taken control of society so that war and pain are minimized, but free will is now nonexistent. With Incite, Liam's dad promises in a company promotional video, "the only choice you'll have to make is us."

After Season 3 premiered, fans theorized that the real world introduced in the premiere is really just another part of the park (aka Futureworld), but the truth is likely much more insidious. Maeve and Dolores probably are in the real world, but thanks to Serac's Rehoboam, it's a world that's so devoid of personal choice that it might as well be another Westworld, full of hosts without agency following pre-determined paths. (This explains why Incite's logo looks suspiciously like a maze.) It's not difficult to imagine how much havoc Dolores could wreak on humans if she got control of Serac's system.

The idea that Serac basically found a way to replicate the hosts' existence out in the real world has been hinted at in the past. In 2019, Bernard's actor Jeffrey Wright told The Hollywood Reporter that the human world is like a "mirror reflection" of Westworld. He described Season 3 as an exploration of how "the worlds are turned upside down and inside out once more," and that now the positions of human and host have swapped.

Since Serac is the only one who can control Rehoboam, he has essentially crowned himself the god of humanity. But as Dolores said in the premiere episode, "the real gods are coming...and they are very angry." It's probably not a good sign that the name "Rehoboam" refers to a Biblical king whose reign led to a years-long bloody conflict. With Serac positioning Maeve as Dolores' antagonist once again, a fight between the two – and many more bloody deaths in between — is basically inevitable.

More like this
Keyla Monterroso Mejia Is Finally The Star Of The Show
By Gabrielle Bondi
The 'Teen Wolf' Creator Revealed If 'Wolf Pack' Takes Place In The Same Universe
By Grace Wehniainen
'That '90s Show' Is Officially Coming Back For Season 2
By Gretchen Smail and Grace Wehniainen
The Plane Crash In 'Dear Edward' Is Based On A 2010 Tragedy
By Grace Wehniainen
Get Even More From Bustle — Sign Up For The Newsletter
From hair trends to relationship advice, our daily newsletter has everything you need to sound like a person who’s on TikTok, even if you aren’t.