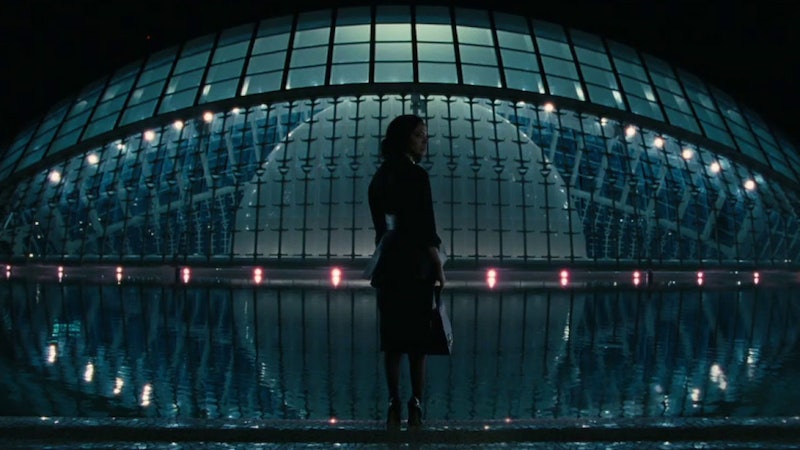 Spoilers ahead for the Season 3 premiere of Westworld. Delos, the Argos Initiative, Incite… Westworld is full of shadowy corporations with even shadowier agendas, each running secret projects that may either save or destroy the world, depending on your point of view. In Season 3, that's Incite's Rehoboam, a mystery system Dolores is now targeting. She's entered into a relationship with the son of Incite's co-founder, Liam Dempsey, Jr. (John Gallager, Jr.) in an effort to gain information on the company and its pet project. (Liam's father previously died a mysterious death and left his half of the company to his son.) The system is portrayed as a large, glowing black and red ball silently pulsing away inside Incite… doing something nefarious, no doubt.

Fans who've been closely following the show's promotional materials might be surprised to hear Incite's system referred to as Rehoboam, since the show previously teased the introduction of a system called Solomon. So why the change? And how are the two systems related?

Westworld's Season 3 date announcement video portrays a timeline of what the show calls "divergences": political unrest in Hong Kong, the impeachment of the president in D.C., ecological collapse in Indonesia, the assassination of the president-elect in Buenos Aires, a thermonuclear incident in Paris, and the start of the second Russian Civil War in Moscow, all represented by massive ripples or spikes on a flowing black circle. But then a marker denoting the initiation of a system called "Solomon" appears, and the spiky divergences are smoothed out again. "For the first time, history has an author, a system," says Incite's other co-founder Serac (Vincent Cassel). Chaos is replaced by order… until a new disaster, the largest of all, appears: a "critical event" in an unknown location. "Up until recently, the system was working," Serac intones. "But there's someone we haven't accounted for: you."

It can be surmised that Solomon was a system that used advanced AI to analyze the patterns of history and chart a course for the future in order to combat would-be catastrophes and bring peace to humankind. But at what cost...? Did humanity sacrifice its free will and turn its decisions over to a machine in order to avoid strife? More importantly, what happened to Solomon? Why is Incite's system now called Rehoboam? The answer lies in its name: in Hebrew tradition, Rehoboam was the son and successor of King Solomon, who ruled after him from 931-913 BCE.

While King Solomon was famed for being immensely wealthy and wise and for forging the Kingdoms of Israel and Judah into one United Monarchy, King Rehoboam is more infamous for presiding over his father's fractured empire after the 10 tribes of Israel rebelled and won their independence, leaving Rehoboam to rule only over the Kingdom of Judah. (Jeroboam, who would go on to rule the Kingdom of Israel, was originally the slave in charge of all of King Solomon's forced labor; it was Rehoboam's harsh treatment of these slaves that led to Jeroboam's insurrection and the rebellion of Israel.)

From this context, it can be assumed that Rehoboam is the successor to Solomon, the next evolution in the system's development — although the period of peace that Solomon presided over has been fractured and Rehoboam has inherited a more unstable world, thanks to Dolores. Will Dolores — the Jereboam in this analogy — successfully lead humanity, slaves to Incite's system, in a revolt against the rule of Rehoboam?

If history is any indication, the answer is yes… but that doesn't mean things will end will for Dolores either. After establishing himself as King of Israel, Jereboam turned away from God and led his people in the worship of false idols instead; for his sins, he was cast down and every single member of his family was slaughtered.

Is Dolores headed for victory over Incite, followed by her own downfall? With calamities once again spiking through the timeline, history could be doomed to repeat itself, with Dolores following in Jeroboam's footsteps of successful rebellion… and ignominious defeat.

More like this
'The Last Of Us' Has Revived The Inspirational "Hopepunk" Trend
By Sophie McEvoy
'The Last Of Us' Video Game Revealed Tess’ Fate In The HBO Series
By Brad Witter
Wait, Is Barney Stinson Related To Sophie On 'HIMYF'?
By Gretchen Smail
These 5 Words In 'The Last Of Us' Ep 2 Have A *Major* Impact In The Future
By Sophie McEvoy
Get Even More From Bustle — Sign Up For The Newsletter
From hair trends to relationship advice, our daily newsletter has everything you need to sound like a person who’s on TikTok, even if you aren’t.