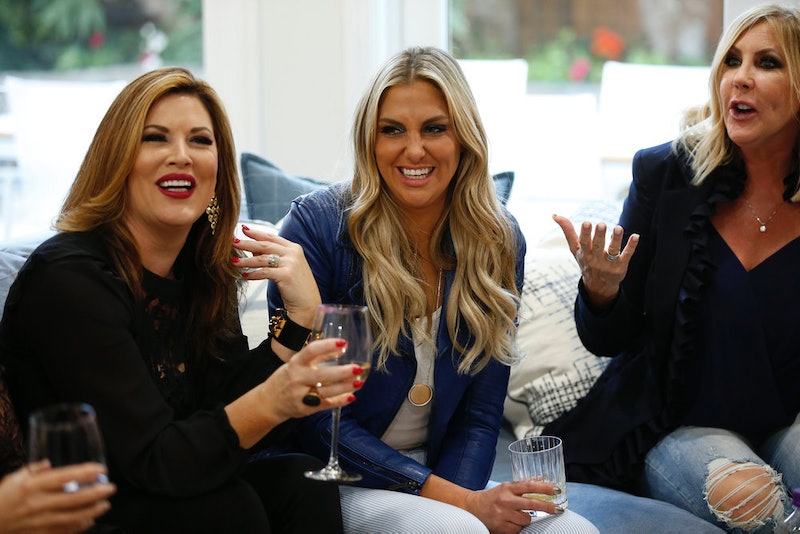 It’s not easy being a rookie on the longest-lasting Real Housewives franchise, but it’s especially not easy being that rookie when you’re filing for divorce. But that’s where Gina Kirschenheiter is, and boy, has she received some serious blowback from the ladies for her decision to divorce her husband, Matthew. Luckily, it’s clear that this conscious uncoupling is the right thing, because the latest updates on Gina and Matthew’s divorce on RHOC show that they’re putting their family first, even if they don’t want to be together anymore.

When Gina first told the group that she and Matthew were getting a divorced, the women were incensed. Gina could have told them that she had stolen all of their money, their kids, and all of their husbands, and she would have gotten a kinder reaction from the rest of the women than she did when she said that she and her husband had made the very difficult decision to split up,. Their reactions were totally unfounded.

Tamra, Vicki, and Shannon all went through horrific divorces, they argue, but the one thing that seems to be different about their situations is that they were all married to horrific men who degraded them, spoke down to them, and were generally just crappy to them. Viewers saw Simon and Donn and David, respectively, be just terrible before and during their divorces. Gina and Matthew simply… drifted apart, which can happen, especially if you spend a lot of time in separate cities. The fact is that no one needs a "good reason" to divorce someone — and the women's reactions were totally unfair. No one but Gina and Matthew know what's best for their family and, more importantly, no one but Gina knows what's right for her. People need to lay off of her.

As Gina has explained on the show, Matt’s job takes him to Los Angeles during the week, and he’s never at home with the kids, which mean she handles the entire household alone, save for his paychecks paying for it all. That’s hard on a relationship. Gina told Us Weekly, “I think that moving to California had a very big, big impact on our relationship. Because when we were on Long Island it was a community of people surrounding us.” She added that had she known she was going to split from her husband on television, she wouldn’t have signed up to be on the show in the first place.

Gina and Matt are not divorced yet, but Gina told People that their negotiations have been fair and civil. “We’re always going to be family. We are a family,” Gina said. “Matt, I would never throw under the bus. He’s my best friend. I can never imagine him not in my life. He’s the father of my children. He’s the most important person to me.” This is a refreshing take. Why shouldn’t Matt be important to Gina? They’ve been a couple for over a decade, and they have three beautiful children — Nicholas, Sienna, and Luca — together.

Clearly, there’s still no animosity, as the family is still spending a lot of time together — they just got a dog, according to Gina’s Instagram, which she definitely got outvoted on. It looks like they're doing the best they can, just like so many other couples out there.

Gina told Andy Cohen on Watch What Happens Live that, for now, nothing is changing in their lives except the fact that she and Matt are no longer romantically involved. Their kids are happy and healthy, and their relationship has just drifted to a close. If only all divorces could be so easy — and if only the other women could understand that.