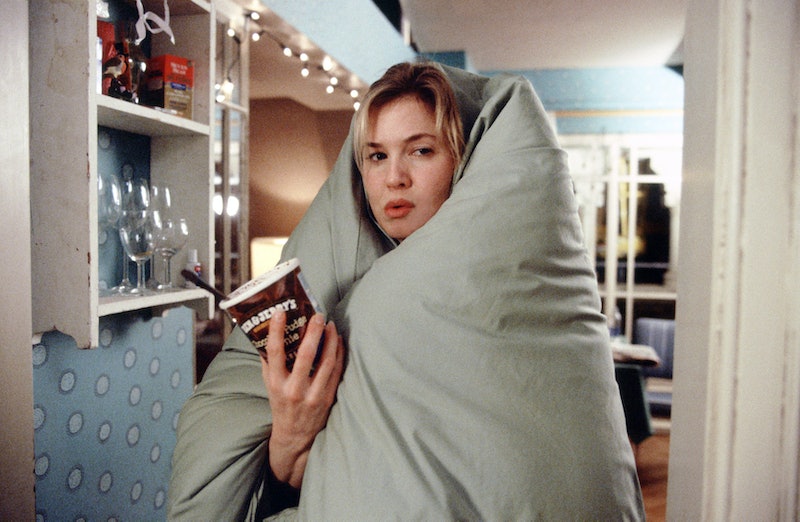 The Bridget Jones franchise is more than best-selling books and blockbuster films. It's an effing lifestyle. One that, for some of us, is still a go-go. Yes, being the slightly dippy hopeless-ish case of your gang of pals. A bit on the clumsier side of things. Snarfing white wine a mile a minute while singing Celine Dion. If you've not done it, give it a go. But it looks like that Bridget isn't only in all of us, she's very much in celebs too, including the actor who played her. Yes, Renee Zellweger has said that Bridget is "always there" with her.

It was during an interview in the October edition of Red Magazine that she spilled the beans on her Jones-ish feelings. She explained that Jones pops into her head every time something fun or funny happens. Like your hilarious BFF who gives you the giggles. The actor told Red (via the Daily Mail):

"I don't think Bridget ever really leaves. She's always there, particularly if I have a live television event or red carpet. And I love her — she makes me laugh. I mean, she's always a delight."

So the obvious question alongside that is, if she's in her head already — would she be down to make another movie? Is the world right to brace for Bridget Jones 4? Well, according to her Red interview, if the brains behind it were keen, she'd be all over it:

"I mean, if that's what Helen [Fielding, the author] wants to do, it sounds fun."

Not only is she up for another spin as our beloved Bridget but she also shared her love for the nation's capital, which she has frequented a lot over the years since starting Bridget Jones. "Every time I come back it feels like homecoming," she said. "And it's easy, I mean, the geese on The Serpentine are the only thing I worry about — they can stand their ground." Preach.

But surely she must get recognised everywhere she goes, right? Well, as Zellweger explained to Red, her sartorial choices help her keep a low profile while in London: "[U]sing the Tube is really easy. It's all really easy, I think, if you just look normal. [I wear] gym gear. I look like I'm going to the gym most of the time, and nobody even looks in my direction."

More recently, however, Zellweger has been buys at work making the hotly anticipated biopic of the legendary Judy Garland. Mother of Liza Minelli, gay icon, star of The Wizard Of Oz, and notoriously troubled star. A star who sadly died long before her time at the age of 47.