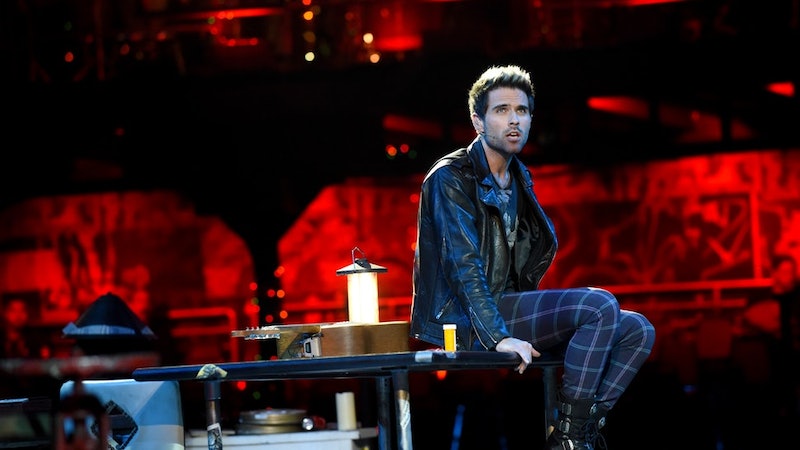 There's an age-old saying that states, "The show must go on." And on Sunday night, that's precisely what Rent Live's cast was forced to do after one of their stars suffered an injury that caused the performance to undergo some pretty big last-minute changes. But while the stress of it all could've ruined the evening, everyone powered through, which makes Rent Live star Brennin Hunt think he broke his foot for a reason.

"What happened last night would not have happened if my foot had not been broken, and what happened last night was beautiful," Hunt told Variety during a recent interview. "It was the essence of Rent and I'm trying to stay as positive as possible and know maybe my foot broke for a reason." Typically when it comes to theatrical productions, each performer is given an understudy in case anything were to happen to any of the leads, thereby allowing the show to continue on for the audience no matter what. However, live musical productions like Rent don't tend to follow this tradition, but rather record the dress rehearsals in case a problem (such as an injury or power outage) occurs. That's why a majority of what aired on Sunday night was pre-recorded, allowing fans to enjoy Hunt's performances prior to his unfortunate accident.

For Hunt's part, though, he was simply grateful that the timing of his injury worked out the way that it did. "I was just fortunate that we got through all the way up to that point," Hunt told the outlet during the same interview. "If I would have broken it before 'What You Own,' there's no stage-diving, there's no climbing the ladder. I'm trying to think of all of the positive!"

As for what caused Hunt's broken foot to happen in the first place, the actor revealed that it was all due to a final quick costume change he was trying to get to before the finale number. "I was jumping off that last step to make a left, and my right foot just rolled over, and I snapped a bone in the arch of my foot," he recalled. "I immediately dropped and was in a lot of pain, and I knew it wasn’t good because even with my in-ear monitors I could hear it snap." A quick trip to the ER proved his worst fear: his ankle was broken and there was no way it would be healed for the live performance the next day.

But as disappointing as that was, Hunt's cast members rallied to his side, showering him with love and support. They even adjusted the choreography so that he could perform in front of the live audience on Sunday evening. "We put on a little concert for the audience last night. I was in a wheelchair and we performed the numbers along with the monitors that were broadcasting what we did on Saturday," Hunt explained. "It was the true essence of what Rent is — because we do love each other. We became a family, working together for months. And you get to see it in that, and they captured it all last night."

It's like the song goes: "Forget regret, or life is yours to miss. No other path, no other way. No day but today" — words that Hunt himself has clearly taken to heart.