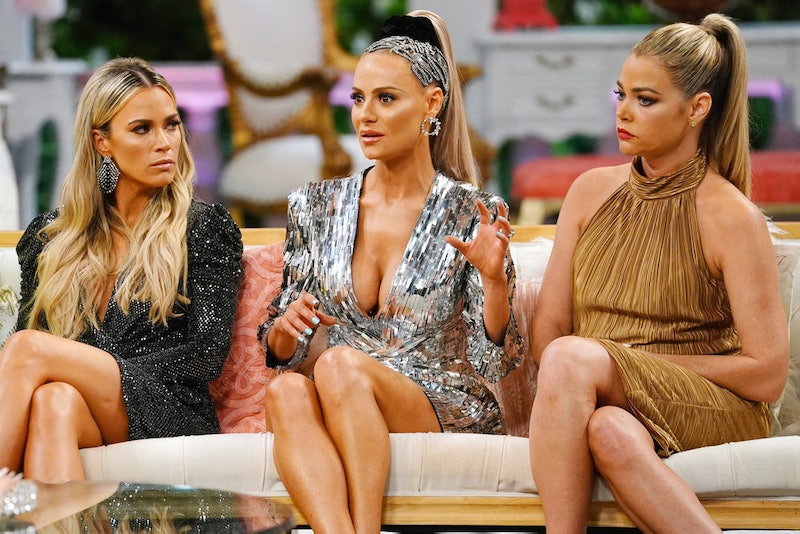 If you've been paying attention to Real Housewives Of Beverly Hills, you know that Lisa quit in a huff because the other Housewives questioned her ability to control plot lines and hide her alleged behind-the-scene machinations. She even took a lie detector test on TV, which was dramatic, even for her.

Bravo hasn't made an official announcement regarding the fate of Real Housewives Of Beverly Hills Season 10, but Kyle Richards, who has dubbed herself the new "queen" of RHOBH in Vanderpump's absence, is confident that the series will be picked up again. "Our ratings have been really fantastic so I would assume [we'll be back for Season 10], but you never know in this business," she told Newsweek. "I am grateful that the viewers are still tuning in after this many years." Hopefully, big ratings mean big renewals in this case, because Real Housewives Of Beverly Hills can't quit now — not after the Lisa Vanderpump-Lucy-Apple-Juice fall out. Things can only get more interesting from here.

According to Andy Cohen, Real Housewives Of Beverly Hills will go in a new direction without her. (By the way, doesn't that seem like the show is being renewed? It's not official, but... still.) "We have a team of all-stars on [RHOBH] I mean, if you look at that cast, it’s like… It’s a powerhouse group,” Andy told Hollywood Life. “So I’m excited to see where it goes.”

But who will join that powerhouse group of ladies on Real Housewives Of Beverly Hills? Although Andy Cohen was allegedly seen having dinner with Kathy Hilton, Kyle's sister, he said, per Bravo, that they happened to be having dinner at the same restaurant and took a photo together. Of her other sister joining the cast, Kyle said she'd be all for it. "I've had one sister on, why not have another sister on? My sister Kathy is actually — people don't know this — she is one of the funniest people there is," Kyle said. "She's a practical joker and she's very, very funny. So I think she'd be an amazing housewife, actually."

A lot is in the air when it comes to Real Housewives Of Beverly Hills, but after such a season, how could they not bring this amazing show back? We lost Lisa Vanderpump, yes (she didn't even show up to the reunion, which is not good), but we can gain so much more without her. There's always room for a new direction, and hopefully, we'll see that on Season 10.