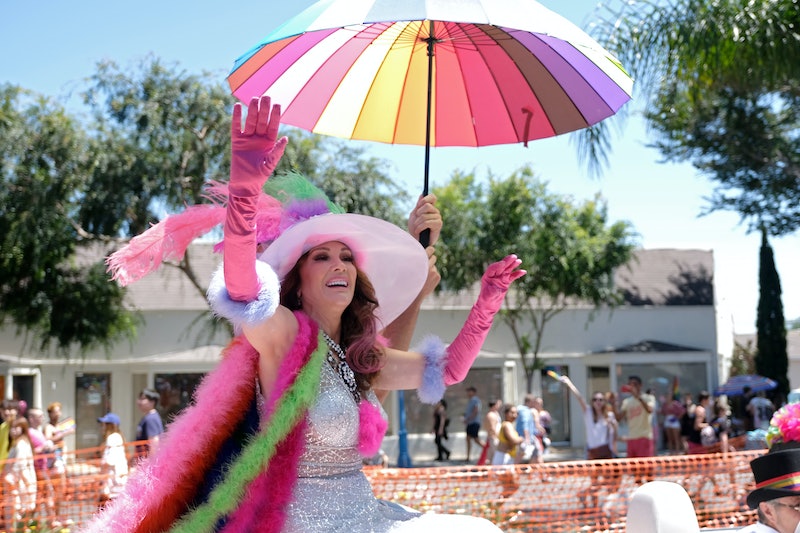 After much speculation throughout the course of the season, Lisa Vanderpump quit Real Housewives of Beverly Hills and skipped out on the Season 9 reunion taping. Some RHOBH fans can't imagine the show going on without Lisa's "British humor." Others are ready to move forward and just want to know who will replace Lisa Vanderpump on Real Housewives of Beverly Hills next season.

The king of Bravo himself Andy Cohen addressed Lisa's departure from the Real Housewives franchise during an episode of his radio show Andy Cohen Live on SiriusXM's Radio Andy.

Reflecting on the reunion, Andy admitted, "I really wish she had been there. I think she would’ve done great and I hope and I think she actually could’ve left with some resolution." Now we will never know. Looking ahead, Andy said, "No one will ever replace her." He even said that LVP "will always be the queen of diamonds in the Bravo universe." However, he reminded us all that "the show will go on."

The Watch What Happens Live With Andy Cohen host added that, "She is iconic and I am so glad that we will continue to see more of Lisa in all of her glory on Vanderpump Rules." He concluded, "I guess that’s what mitigates the loss of her from Beverly Hills."

But what about the actual spot on Real Housewives of Beverly Hills? Who will hold up a diamond during the Season 10 opening credits?Considering that Season 9 is still in airing, it is far too early to make that call, but there are some contenders who are more than capable of stepping up.

Who better to step up as a full-time Housewife than another OG cast member? Camille Grammer has done it all on Real Housewives of Beverly Hills. She was the show's original villain when she invited that medium to read Kyle Richards to filth at a dinner party during Season 1. She eventually became someone the viewers couldn't help rooting for after her difficult divorce from Kelsey Grammer.

Now, she's somewhere in between: stirring up the pot to both infuriate viewers and to provide the drama fans desire. Basically, Camille can do it all. You never know what you're going to get with Camille and that alone is reason enough to give the current Friend of the Housewives a diamond. Plus, she's already in the thick of it when it comes to drama with the ladies. She would need zero time to adapt to a full-time role. She is an OG, after all!

Let's be honest: the show just hasn't been as good since Brandi Glanville left after Season 5. Sure, there have been some great moments here and there, but the "boring seasons" definitely came in the AG (After Glanville).

She's been slowly making her way back into the circle, too. Brandi appeared on the June 4 RHOBH episode to sip on some drinks and spill some tea with Denise Richards. And after years of feuding with Kyle Richards, Brandi and Kyle are now following each other on social media. Lisa Rinna also recently revealed that she called Brandi up to make peace on the Real Housewives of Beverly Hills After Show.

It seems like the ball is rolling for a Brandi Glanville comeback, especially after the remarks Andy made about her during a March 2018 interview with Entertainment Tonight. At the time, he explained, "The problem is, she’s not connected with any of the women."

In that same interview, Andy revealed what it would take for Brandi to return full-time. He said, "If she wound up legitimately becoming good friends with a few of those women, then I think that would be great. Then we would bring her back. Right now … she’s still on an island." Not anymore, Andy.

Unfortunately this is was just wishful thinking when rumors spread about Kathy Hilton joining Real Housewives of Beverly Hills. Kathy shot down the speculation with an Instagram video that she posted on June 9.

Kyle and Kim Richards' older sister shared a video of her self giving someone a haircut. No, you're not missing out an inside joke with that one. It really is as odd as it sounds. In the caption, Kathy said, "Rumors of me joining the Beverly Hills Housewives would interfere with my real job of cutting hair."

No, Kathy is not moonlighting as a hair stylist. And, no she will not be joining her sister Kyle on Real Housewives of Beverly Hills. Although she really should.

This is a casting decision that would make a lot of sense. Nicollette Sheridan should become a Beverly Hills Housewife. Her name came up more than Lisa Vanderpump's when this season started out, which is saying a lot. Nicollette never appeared on the show, but Denise and Lisa Rinna loved talking about how they're both married to guys who used to be married to the Desperate Housewives alum.

Bravo's The Daily Dish confirmed that Nicollette was married to Harry Hamlin for eleven months. Soon after, he and Rinna got together. Nicollette spoke out about Lisa's claims that Nicollette left Harry for Michael Bolton after one of the singer's concerts. This resulted in Lisa, Nicollette, and Harry feuding on Twitter.

Denise's husband Aaron Phypers also had a short-lived marriage with Nicollette according to Daily Mail. They were only married for six months, but the divorce was drawn out for two years. So, there's definitely enough unresolved tension to warrant a diamond for Nicollette.

Who doesn't miss watching Kim Richards on Real Housewives of Beverly Hills? Yes, Kim just appeared on the show to squash her beef with Lisa Rinna, so it hasn't really been that long since we've seen her. However, that was just a guest appearance. We need more!

Kim and Kyle's sister-on-sister drama dominated the first couple seasons of the show. Their fight in the back of limo during the Season 1 finale is nothing short of iconic. Kim helped establish the show for two very different reasons: for shedding light on serious issues like sobriety and for adding some levity with her good-natured humor.

However, Kim is doing just fine without reality TV drama Kim discussed the possibility of an RHOBH comeback during an August 2018 interview with People. Kim teased "I didn’t say that I wouldn’t [come back], I’m just saying I don’t miss the drama and arguing." No one can blame Kim for not missing the drama, but the drama, I mean the fandom, misses her. Hopefully, she was just dipping her toe into the RHOBH pond so she could be ready to dive back in for Season 10 as a full-time cast member. At the very least, we need more Kim appearances.

On one hand, it's tough to envision Real Housewives of Beverly Hills without the diamonds and rosé that Lisa Vanderpump brought to the table (literally and figuratively). However, as Andy said, "the show must go on." No one can actually "replace" LVP, or any of the Housewives, for that matter. They all bring something unique to the show in their own right. Nevertheless, the upcoming cast decisions will be subjected to some major scrutiny from the very loyal Real Housewives of Beverly Hills viewers who want the best of the best for Season 10.