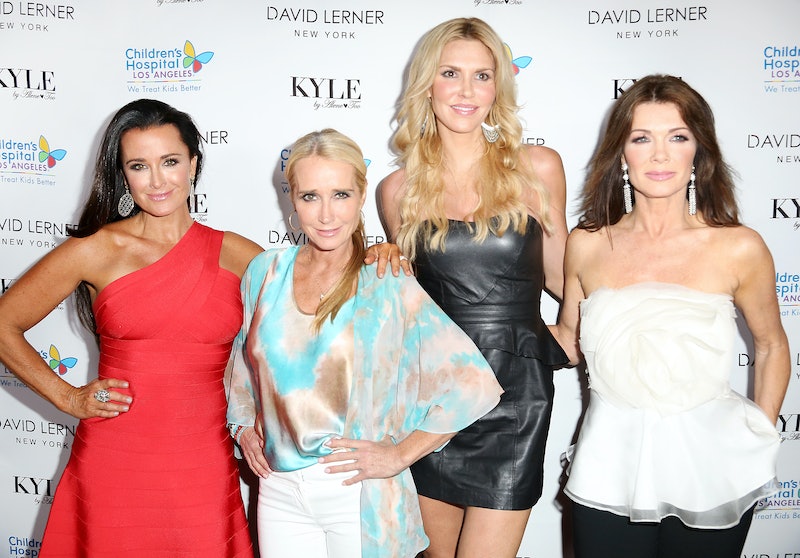 Lisa Vanderpump and Kyle Richards are not friends anymore, and Brandi Glanville and Kyle Richards are totally chill. The Real Housewives of Beverly Hills has become The Real Housewives of The Twilight Zone. On the Wednesday, June 12 episode of Sirius XM's The Jenny McCarthy Show, Kyle Richards talked about Brandi Glanville and whether or not she'd be cool with her former co-star coming back to the show full-time. Oh, and as for that Brandi vs. Kyle feud that ran amok throughout the first few seasons of RHOBH? As Kyle said, they "put the past behind" them.

When McCarthy asked Kyle if she would like to see Brandi return to the reality show’s main roster, Kyle gave her an answer that would send a chill of disbelief up RHOBH Season 5’s spine:

“Yeah, honestly. I mean, I would. She makes me nervous just because she can go very low, to be honest. Sorry, Brandi. But yeah, I would. There’s a history there.”

Brandi turned in her RHOBH diamond after Season 5, and rumors regarding whether or not she will come back to the main cast have been bopping around the Bravoverse ever since. But now that her dear pal-turned-enemy LVP is off the show, and she gets along with most of the current lineup? Brandi's return seems more likely than ever. And if she did come back as a main Real Housewife, Kyle Richards Would. Be. OK. With. It. Never thought I'd see the day.

Can you imagine a world in which LVP is no longer on RHOBH, but Kyle and Brandi can be in the same room without blowing up at each other? Oh, wait. You do not have to imagine it because it is real life. Just last month, Kyle said on E! News web series Just the Sip that she and Brandi crossed paths while filming content for the RHOBH after show and “Brandi was as nice as could be.”

Kyle added that she also recently ran into her former nemesis at the post office and, once again, the interaction was about as smooth as the marble countertops in her kitchen. “It was, 'Hi, how are you?,' and she was just really nice,” she recalled. “She's always watching the show and she's kind of put in her two cents about watching this season. She's just really nice and I left there and I thought, 'You know, life is too short. You gotta let bygones be bygones.'"

As Brandi tweeted yesterday, "If @KimRichards11 myself and @KyleRichards can all move forward... 90 percent of people should STFU and make up." You heard her: Grab an olive branch and make nice. Oh, but do think twice before you grab an olive branch off of a tree that was planted in the middle of your frenemy's restaurant.