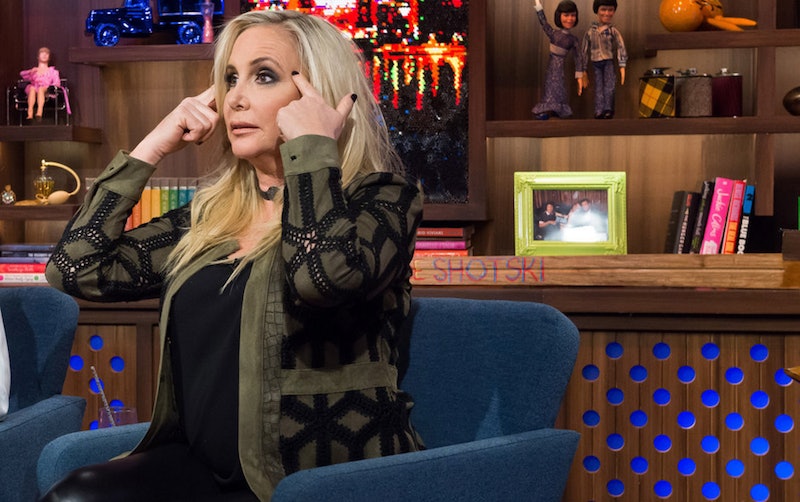 Sad as I am to see Heather Dubrow, Queen Fancy Pants of the Diamond Ice Cube Kingdom, leave The Real Housewives of Orange County before her new manor could make its Bravo debut, I must move on. I must accept it. And I must celebrate the Real Housewives who will continue to be a part of the program. It is good to be grateful for what we still have, you know? On Thursday, Us Weekly dropped another OC Housewives gossip morsel onto our plates: Shannon Beador will reportedly be on RHOC Season 12. And thanks to this report, I am so unabashedly happy. A representative for Beador could not be reached by Bustle at the time of publication.

Please pay me no mind as I hum Lock’s seminal hit “Dreamcatcher” while I arrange nine lemons in a bowl. And yes, the bowl is made out of healing crystals. Obviously. When it comes to Beador, I do not cut corners. She is the best and deserves the best. After all, this is the same person who thought a home colonic kit was stuck up her rear end, asked her husband to take a look, and welcomed the Bravo cameras into her bathroom. The colonic situation was a false alarm, but that doesn’t make it any less iconic. (Or should I say, icolonic?) Beador is such a phenomenal part of the RHOC roster and I am thrilled to hear she’s reportedly sticking around.

Though Bravo has not issued an official RHOC Season 12 casting decree, it has been reported that Beador, Tamra Judge, and Season 8 alum Lydia McLaughlin will be on the forthcoming installment of the series, but Meghan King Edmonds apparently won’t be back. According to Us Weekly, Vicki Gunvalson and Kelly Dodd’s Season 12 status is “still unknown,” but come on. This show needs the OG of the OC and her sole ally.

And as far as brand new OC Housewives go, there is one rumor in particular that really treats me right: OK! reported that The Hills star Audrina Patridge could be added to the cast. According to OK!’s sources, the show’s “execs are tapping the 31-year-old to bring some new blood to the oldest series in the franchise.” Again, all of this is unconfirmed, but oh my goodness. I would love it if Beador, Judge, McLaughlin, Gunvalson, Dodd, and Patridge were all on RHOC Season 12.

If that was the actual lineup, I would count my lucky lemons.