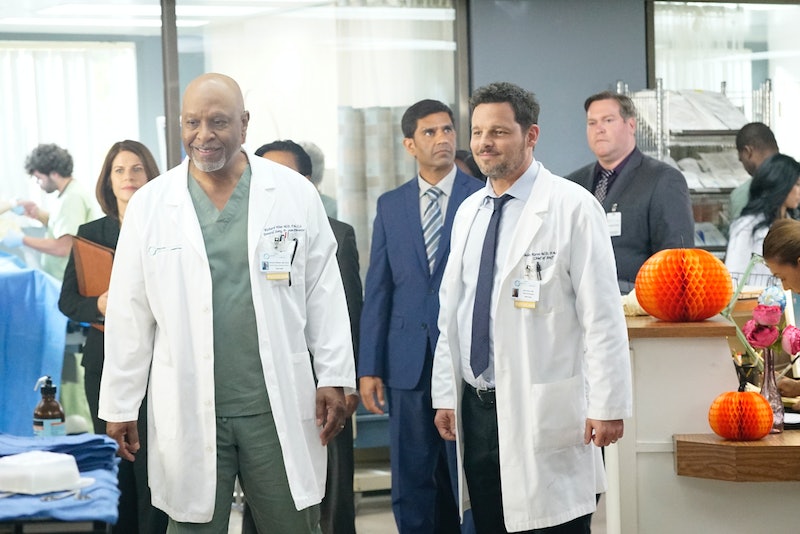 Richard Webber acts as friend and mentor to many of the doctors at Grey Sloan hospital, but in his personal life, it sometimes seems like he’s prone to self-sabotage. Right now, he’s married to the mighty Catherine Avery, but Richard and Gemma’s relationship might change all that. Richard might cheat on Catherine on Grey's Anatomy, losing the best thing that ever happened to him.

Richard’s been married before, to his long-suffering late wife Adele, but he also cheated on Adele, too, with Ellis Grey, Meredith’s mother. Theirs was a long and complicated affair, and the fact that Richard and Ellis were in love doesn't exactly negate the fact that they were still betraying their spouses. Now, Richard has something good with Catherine, but he’s feeling hurt and betrayed, given that she pretty much got him fired from Grey Sloan because he participated in insurance fraud with Meredith Grey.

Enter Gemma, Richard’s friend from Alcoholics Anonymous. They knew each other from meetings, they shared a sponsor, and Richard saved her life when she accidentally stabbed herself in the heart with a stiletto heel in Season 15 (it happens). When they run into each other at Pac North after a rough day for Richard (he accidentally took the wrong patient off life support), Gemma and Richard decide to have a casual dinner. This is fine. Men and women can go out to dinner without any pretense of romance or sex. But, per ABC, the episode description for Episode 5 of Season 16 says that “Richard and Gemma grab breakfast together, and things go awry.”

Uh, what does that mean?

If someone is willing to cheat once, then they can always cheat again. Since Richard has participated in this pattern before, there’s a high possibility that he would cheat on Catherine with Gemma. Right now, he’s feeling lost — he doesn’t have his job, he accidentally killed a patient — and Catherine is off dealing with other things at Grey Sloan. She’s not obligated to kiss every one of his boo boos, but she’s not giving Richard the support he needs right now, and that could push him into the comfortable arms of a woman that he’s known for a long time, who also happens to know him on a deeper level from AA.

And while we don’t know just yet what Grey’s Anatomy has planned for Richard and his love life, showrunner Krista Vernoff told TV Line that there’s a standalone Webber episode in Season 16 that’s going to be huge for Richard. “We have big episode for him this season,” she said. “I don’t feel like he’s quite been given his due.”

Given Richard’s recent lapse in sobriety, the challenges of his marriage, and the loss of his job, Richard needs it — he has a lot to work through right now. Let’s just hope he can do it without the crutch of finding another woman to comfort him.