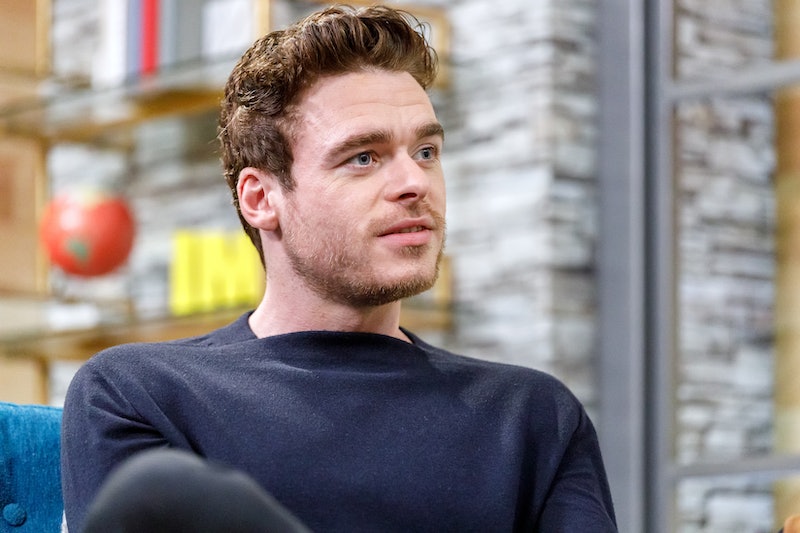 Going out on your own as a creative is hard work. Not only are creative industries incredibly competitive, it's also a bit of a bind to be constantly searching for work. Arguably one of the most competitive of all industries is showbiz. Making it as an actor is super hard and, for many, means that unless they get that huge stroke of luck, they can end up in absolute dire straits. For example Richard Madden nearly became homeless before his life-changing Game Of Thrones role, and he has opened up about exactly what that experience meant for him.

It was during an appearance on The Tonight Show With Jimmy Fallon that Madden spoke about his situation pre Game Of Thrones. And guys, to be honest, it's a pretty relatable situation:

"I had like two options, I could buy one meal, or a newspaper and a pint. I got that phone call and I was on my last month's rent and I asked my agent for an advance."

As well as launching his career, Madden's role on Game of Thrones evidently helped his personal and financial life in a life-changing way.

Back in April, Madden spoke to Jackal Magazine, emphasising how serious things were pre Game of Thrones. And, again, the situation was very relatable. The actor said:

"I'm not bullsh*tting you — I was completely broke. I used my savings to pay my last month's rent and that was it. I thought, 'After this, I don't have any money. I'll have to move back to my parents.'"

It's clear that Madden was incredibly thankful for his Game of Thrones role. And, I mean, so are we. Because he really is an amazing talent. His characterisation of the tragic Rob Stark was unbelievably moving. Like, imagine being a part of not only one of the best shows of all time but also the best episodes within that show. When I say best, I mean top five most traumatic and most scream inducing. But also super lit and legendary.

Thing is though, Madden is certainly not a one trick pony. Or should I say a one trick dire wolf? Nope, this guy is incredible versatile. Last year, he starred in one of the most-watched TV shows in BBC history. As the hunky, husky, David Budd in Bodyguard. It was a role that Madden won a Best Actor Golden Globe award for.

Most recently, he appeared in the Elton John biopic Rocketman. The film is the story of John's life and music career. Including all the singing and dancing that made him famous as well as the hidden struggles with his sexuality, alcoholism, and depression. Madden plays the singer's former lover and manager John Reid.

And, by the looks of thing, Madden has some exciting new projects in the works. The actor is appearing in 1917, a WWI film directed by Sam Mandes and also featuring Benedict Cumberbatch and Andrew Scott, as well as The Eternals, a new offering from the Marvel universe.

More like this
Owen Warner's Net Worth Might Surprise 'I'm A Celeb' Fans
By Sam Ramsden
Our First Look At 'Vardy V Rooney: A Courtroom Drama' Doesn’t Disappoint
By Bustle UK
Idris Elba "Breaks Out" Of London In 'Luther' Film First Look
By Sam Ramsden
Ciarán Griffiths Is Making His 'Corrie' Comeback
By Catharina Cheung
Get The Very Best Of Bustle/UK