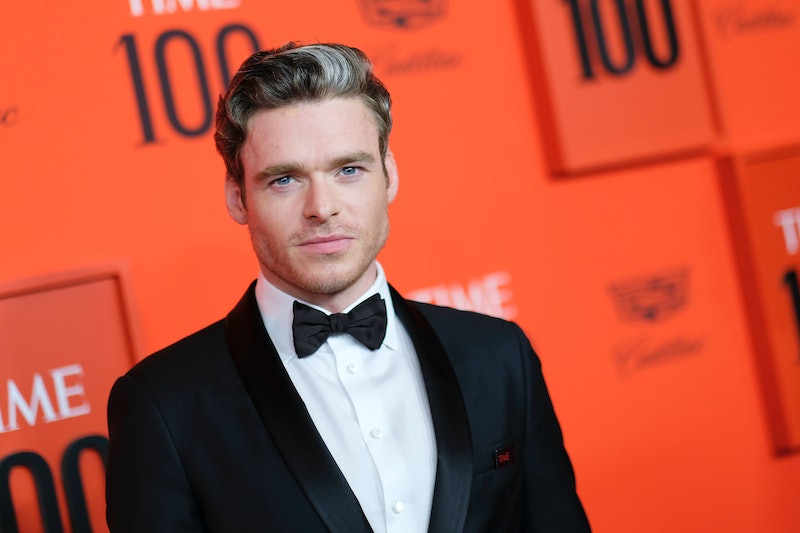 Ahead of its series finale, Game of Thrones has quite the awards haul to its credit. With 47 Emmys, a Golden Globe, and an undeniable cultural cache, the HBO series is ending with plenty of recognition on Sunday, May 19. But actor Richard Madden thinks the Game of Thrones cast should get medals, especially those who have been with the show from beginning to end.

Madden played Robb Stark, heir to Winterfell and "King in the North," on the first three seasons of the series. But Robb was one of the many Red Wedding casualties to break the Internet in 2013. (If only fans knew how many shocking character deaths were still to come.) But before Madden's character was tragically stabbed by Lord Bolton, he was a fan-favorite.

In a recent sit-down with Sharp Objects' Amy Adams for Variety's Actors on Actors series, Madden reflected on his time with the show. He also commended the cast members who had devoted over a decade to Game of Thrones. "It was such a hard thing to finish because from first pilot to my death was five years," Madden said to Adams. "And I think, five years to spend with any one character — cause you just kinda put them on the shelf for six months and then you take them back again."

Madden continued by crediting the show for preparing him to work on other projects, which included playing another royal in 2015's Cinderella and leading the 2018 Netflix series Bodyguard. "I had the best time, it helped me so much with my career and my experience," Madden said. "I learned a lot just from shooting 30 hours of television, I really started to learn my trade doing that."

If Madden had such an impactful experience working on Game of Thrones, one can only imagine what actors such as Peter Dinklage (Tyrion Lannister) and Emilia Clarke (Daenerys Targaryen) are taking away from their decade of dragons. Madden thinks those co-stars deserve all of the awards. "And I was thankful to leave it, I think the actors on it now must be 11 years into playing these characers and that is like — give these guys some medals here because that is a marathon," the actor explained.

Several of Madden's onscreen GoT Stark siblings are still on the show from Sansa (Sophie Turner) to Arya (Maisie Williams). In fact, some are even predicting that someone in the Stark clan will ascend the throne in the hotly-anticipated finale. For those still a part of the cast, keeping the ending a secret has definitely been a struggle. In April, Clarke told Stephen Colbert that her mom knows the Game of Thrones ending. While Kit Harington (Jon Snow) told his wife and former GoT co-star Rose Leslie (Ygritte), and Turner divulged to new hubby Joe Jonas.

But sooner rather than later, fans will also know the ultra-secretive ending. Just as it's been quite the tenure for the cast, the Game of Thrones audience should be honored for their dedication to this roller coaster of a drama.