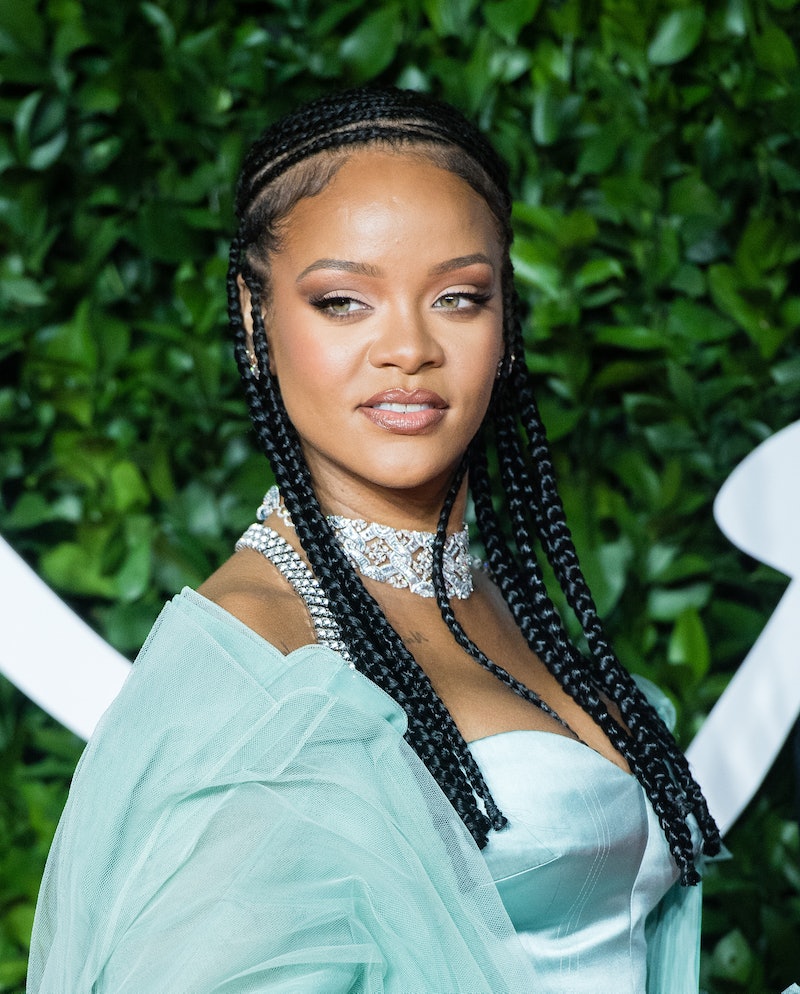 Sorry, Rihanna fans — looks like any new music will have to take a back seat to some more important work at the moment. During an Instagram Live session on Friday, April 10, Rihanna told fans a music release isn't on the horizon, because she's too busy "saving the world." Her comment came after her IG Live was flooded with questions about the status of her ninth studio album.

The Fenty Beauty founder fired back at fans in her trademark fiery fashion while talking about the work she's been doing to prevent the spread of COVID-19 and help those who have been affected by it. "If one of y'all motherf*ckers ask me about the album one more time when I'm tryna save the world, unlike y'all president," Rihanna said, according to Page Six, adding that she would take them on "on sight!" In March, TMZ reported that the singer donated $5 million through her Clara Lionel Foundation to support various groups in the United States and around the world who were working to help victims of the novel coronavirus.

A few days later, New York governor Andrew Cuomo publicly thanked Rihanna for donating personal protective equipment to health workers in New York state who are working to treat patients with COVID-19. On March 31, Rihanna and JAY-Z each donated $1 million for coronavirus relief efforts that, according to Page Six, "specifically help the most vulnerable in Los Angeles and New York City." Most recently, on April 10, the singer and Twitter founder Jack Dorsey each donated $2.1 million to the Mayor’s Fund for Los Angeles, which works to assist victims of domestic violence affected by the city's "stay at home" orders.

Rihanna has been teasing her fans about the possibility of releasing new music since December 2018, when she told a fan who asked when she'd release "R9" — as the Rihanna Navy have nicknamed her upcoming project — that the album would drop sometime in 2019. In September, Variety reported that she signed a an overall deal with Sony/ATV music publishing, though she didn't release any new music in the months following that deal.

In January 2020, Rihanna gave fans an update on "R9" in an Instagram post, sharing photos from the studio where she was working on new music. However, she didn't give any more concrete information than that, in order to keep the Navy waiting for news. "I like to antagonize my fans a little bit," the singer joked to Entertainment Tonight in February, referencing the many memes and comments she's posted about her upcoming album. "Well, they antagonize me, too! So, they get it right back."

While she might not yet have a release date in mind, Rihanna has shared some hints about what fans can expect from the highly-anticipated album. In October 2019, Rihanna told Vogue that she has been working on a "reggae-inspired" album over the past few years. "It’s not gonna be typical of what you know as reggae," she continued, adding, "But you’re going to feel the elements in all of the tracks."

In March 2020, Rihanna told British Vogue that while she "can’t say when I’m going to drop [an album]," she was "very aggressively working on music." And it sounds like whenever it does get released, R9 will be worth the wait: "There are no rules. There’s no format. There’s just good music, and if I feel it, I’m putting it out," Rihanna said. "I feel like I have no boundaries. I’ve done everything — I’ve done all the hits, I’ve tried every genre — now I’m just, I’m wide open. I can make anything that I want." And fans will get to hear it, just as soon as Rihanna is finished saving the world.

More like this
Rihanna Is America's Youngest Self-Made Woman Billionaire, According To 'Forbes'
By Hugh McIntyre
What Is Ariana Grande's Net Worth? When It Comes To Money, She Has No “Problem”
By Hugh McIntyre
Rihanna Just Made Her First Official Outing Since Becoming A Mother
By El Hunt
Beyoncé Delivers “Soaring Vocals” On New Album “Renaissance”
By El Hunt and Radhika Menon
Get Even More From Bustle — Sign Up For The Newsletter