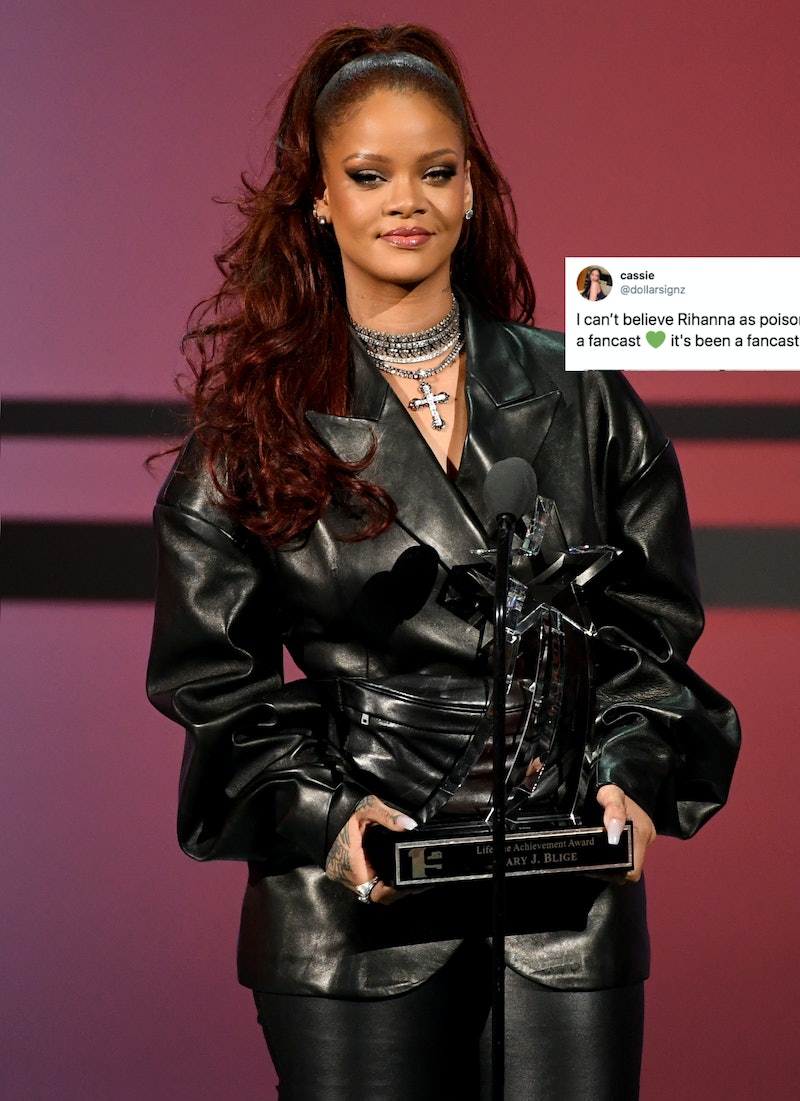 Rihanna started out in the music scene, but to say she's branched out over the years would be an understatement. From makeup, to lingerie and clothing, and even acting, RiRi has done it all. And now Rihanna's recent Batman reference has fans convinced she's playing Poison Ivy, something fans have wanted for a long time.

As fans eagerly await new music from the artist, something they might not have to do for much longer, she posted a little video that has caused a stir on the web. The video is pretty harmless: a quick closeup shot of her matte, black boots, probably from her new line considering she tagged FENTY. However, it's the caption that has caught everyone's eye: "bat-mobile, but make it fashion!"

There's been a lot of talk about Batman recently thanks to the new movie in the works starring Robert Pattinson as the Caped Crusader. And while no other casting news has been announced, Rihanna making a Batmobile reference was too much for fans on the internet, since they've always wanted her a part of the DC movie universe as Poison Ivy.

Rihanna has been a number one choice among fans to play Poison Ivy for quite some time. The idea most recently resurfaced in 2018, when she posted promotional photos for new Savage X Fenty merchandise that featured neon green lingerie, including matching arm gloves. It screamed Poison Ivy vibes, and thanks to fandom artist Bosslogic, fans were able to really visualize Rihanna as the iconic villain.

And with this recent Batman reference on her social media, Rihanna has only fanned the flames. But it's not just Rihanna who has sparked this most recent wave of Poison Ivy rumors. According to HotNewHipHop.com, sources claimed that Warner Bros. wants Rihanna to play Poison Ivy, the Gotham botanist-turned-deadly-villain, in the upcoming Batman film. In addition, Matt Reeves, who's directing and writing the new film, told The Hollywood Reporter that there will be a rogues gallery in Pattinson's Batman. Considering Poison Ivy is obviously a part of said gallery in the comics, it'd be logical for her to pop up in the movie as well.

Including Poison Ivy in The Batman would make sense. She's one of Batman's biggest villains, and the sexual tension between Bruce Wayne and Poison Ivy would certainly make for a great movie.

Another reason to get excited about Poison Ivy possibly making her way into a new DC movie: Harley Quinn. In the comics, these two chaotic villains are very close, even becoming lovers at a certain point. So these Rihanna rumors are very intriguing for HarleyIvy shippers on Twitter, too, especially since Harley Quinn is gearing up for her own film, Birds of Prey.

Granted, some upcoming DC movies, like Joker, aren't going to be in the same universe as previous movies like Batman Vs. Superman and Suicide Squad, so even if Poison Ivy was introduced, it's possible she'd be in a different universe than Margot Robbie's Harley Quinn. But maybe they can make an exception this one time, for Rihanna's sake. A fan can dream, can't they?