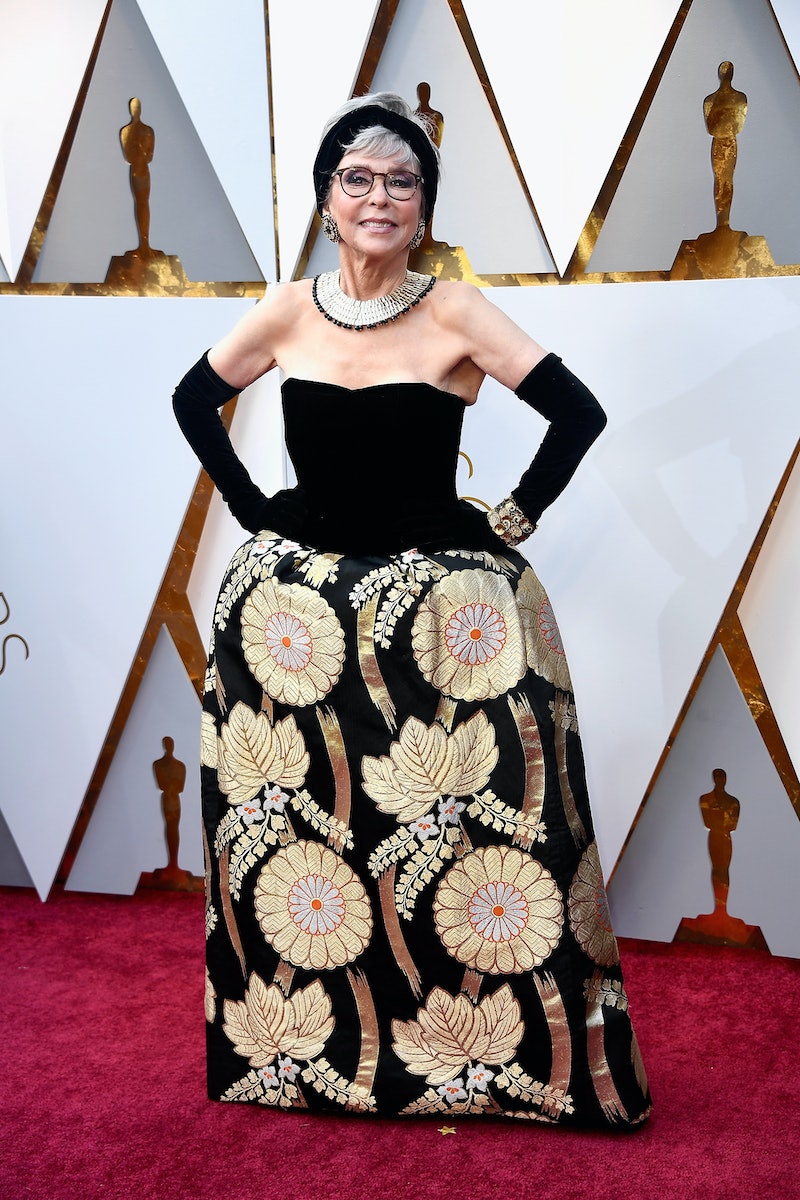 Hollywood legend Rita Moreno hit the 2018 Oscars red carpet wearing a gorgeous gown with a printed skirt, long black gloves, and a headband — but only her biggest fans would know that her dress is actually the same exact thing she wore to the 1962 Oscars. Most surprisingly, the garment looks brand new.

Moreno is best known for her role as Anita in West Side Story. The role earned her an Oscar for Best Supporting Actress, making Moreno the very first Latina actress to win the award. On that momentous day, she wore the same gown she wore to the 2018 Oscars. According to Moreno, the frock was created in Manila, Philippines and has stayed in her closet ever since the first time she wore it.

"The fabric is made out of obi," Moreno told E! Red Carpet host Ryan Seacrest, "Which is the sash that Japanese women wear on their kimonos."

Obi fabric is typically thick and woven with bright patterns and colors, which might explain why the gown has held up so well over the years.

"You would think that it would tarnish," Moreno said. "It's been hanging in my closet."

In order to fully appreciate the greatness of Moreno's look, you've got to first see the original version, worn by Moreno in 1962 when she won her Best Supporting Actress Oscar.

Of course, there are some subtle differences between Moreno's 1962 Oscars appearance and her presence on the red carpet in 2018. The first time Moreno wore the gown, she infamously gave a 15-second acceptance speech to accept her award. At the 2018 Oscars, Moreno won't be accepting any awards (she's not nominated) but she will be presenting an award. She also reworked the gown itself, lowering the neckline and turning it into a strapless gown, and added dramatic long gloves to match. In order to keep the neckline interesting, Moreno rocked a killer collar necklace, a surprisingly modern touch for a look that, overall, feels super vintage. Finally, 2018 Moreno wore some incredible accessories on the red carpet, including a fierce pair of glasses and a thick velvet headband that gave her vintage dress a glamorously vintage overall feel.

Clearly, the dress was as memorable as the speech, and when someone has a red carpet fashion moment as amazing as this, you can bet that Twitter will have something to say about it. Add this to the fact that Moreno is a beloved Hollywood actor, and it's no surprise that Twitter is basically in love.

Some fans loved the nod that Moreno gave to her first Academy Award win, all of those years ago.

Others wanted to remind us that when you've got a killer look, it truly never goes out of style.

At least one fan kept it real about Moreno's look compared to, well, the rest of us.

And of course, someone had to give Moreno the award for Best Dressed (arguably more important than any other award that happens on Oscar night).

“This is a 56-year-old gown that I wore when I won my Oscar in 1962," Moreno told People magazine on the 2018 red carpet. "This is the dress. It’s been hanging in my closet and I go and stroke it now and then. I just love — it was an amazing night."

She also shared an interesting detail with People — one that proves how much the fanfare before the Oscars ceremony has changed.

"They didn’t have a red carpet then, it was so different," Moreno told people.

Despite the lack of red carpet action in 1962, Moreno brought her style A-game. And now, on the red carpet of 2018, she did it again in the same dress. If that's not the perfect example of timeless style, what is?